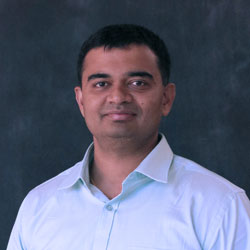 Anyone reviewing SIS Associate Professor Devendra Potnis’s research and service work throughout his career can see he has a deep passion for helping people at an international level, as well as a commitment to diversity, equity, and inclusion. Whether it’s helping low-income populations in India become digitally literate, exploring how social media can be used as a tool to fight government corruption, or assisting international researchers in getting their work published, Potnis seeks to level the playing field for those who are at a disadvantage.

In that vein, he is being recognized by the Association for Information Science and Technology (ASIS&T) for work he did as chair of the association’s International Paper Contest (IPC) held by the Special Interest Group on International Information Issues (SIG-III) from 2017-2020. Potnis will receive the ASIS&T SIG Member of the Year Award at the 2020 Annual Meeting in October.

Potnis said he initially chose this particular position because of his existing interest in international research, and because then-SIS Director Diane Kelly pushed him to take on “high-impact service activities.” He ran for election and became chair for one year, and was re-elected for the next two years; during that time, Potnis definitely left an impact with the changes he instigated for the IPC.

“I took it beyond a paper contest, I made it an opportunity for researchers in developing countries to get feedback from the paper contest jury members. That helped them a lot to reposition their paper for publishing in American and international journals, and [those researchers] don’t have that kind of guidance in their countries,” he said, noting that for the last three years, he individually communicated the qualitative feedback provided by the IPC jury to more than 30 authors of paper contest submissions so they could improve their work.

Potnis also pushed to not allow researchers from North America to compete in the IPC, as he felt those researchers have heavy support in their endeavors, and many other opportunities to be recognized for their work outside of this particular contest.

“Researchers in America have a high level of support and people in developing countries do not. You cannot have the same award for people who are highly trained competing against those who are not,” he said.

Since these changes were instituted, Potnis said he has seen many of the IPC winners network with other researchers throughout the world and get their work published internationally. This past year, SIS alumna Kendra Albright offered the IPC winners to submit their papers to her international journal, Libri, which he said was a significant boost to their careers.

Other changes he made and work he did while in the chair position include:

Potnis said serving on the committee has advanced his own commitment to diversity, equity, and inclusion work, and has also helped him make more connections with international researchers. It’s been a pleasure for him to watch researchers who otherwise might have not been recognized, blossom after receiving the IPC award.

“In general, they are really happy and excited for the visibility that they get, and in their own institutions, their status is elevated when they get this award. They also get to present their research at ASIS&T conferences and SIG-III provides them $1,500 in support so they can travel to present their award-winning research in the form of a poster at the conference,” he said, though he noted this year the ASIS&T Annual Meeting is being conducted virtually.