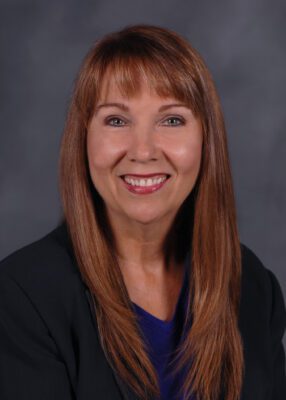 When one takes a step back and looks at the varied career of alum Kendra Albright, it’s not difficult to see why she was awarded the SIS Distinguished Alumni Award in 2017. While Albright is humble about work she put in to get to where she is now, there’s no doubt that she built on her experience in both the corporate and academic sectors to arrive at her current position as director of Kent State University’s School of Library and Information Sciences.

But there was one twist of fate in her story – it is the one that brought Albright to the doors of Temple Court, where a previous iteration of the School of Information Sciences once resided.

She had applied for another graduate program and a paperwork snafu kept her from being accepted, and she was walking back to her car contemplating her next move. She already had an undergraduate degree from the University of Tennessee in Child and Family Studies, and she had already been given a loan to extend her schooling.

“I walked past Temple Court and saw the MSLS sign and the door was open and I thought, ‘I wonder what those people do?’,” she said.

Ann Prentiss, the dean of the school, was the only person in the building – and she proceeded to sit down and chat with Albright for two hours about the library science program. Albright decided she would start out in that program but switch back to her original plan. What she wasn’t expecting was that she’d fall in love with library and information science.

“I loved every minute of it and worked at ORNL as a student and graduated and did an internship downtown at a publishing company called, Whittle Communications,” she said.

After graduation, Albright took on a job as business information center manager at Whittle Communications, and later moved on to work at ORNL with an in-house information consulting group that offered dedicated research support to scientists and engineers. She loved the job, but decided to work part-time when she got married and started a family. She continued working at ORNL, but in a division as chemistry librarian – even though, as she laughingly said it, “I’ve never had a chemistry class in my life!” That said, she ended up learning plenty of chemistry while on the job.

Albright also began picking up some freelance work on the side with clients she’d worked with at Whittle Communications.

“They kept calling and needed some of my help, so I started picking up consulting work and eventually it was turning into more than a full-time job,” she said.

That’s about when she got the call from Bonnie Carroll, who owned Information International Associates in Oak Ridge, asking Albright to come work for her – Albright came on part-time and led a project to index and abstract records for the Department of Energy’s Energy Science & Technology Abstracts, among others.

Though Albright loved working for Carroll, she started getting the itch to go back to school and get her doctorate – she came from a long line of PhDs, and wanted to update her skills as her recent work experience had been in management. So she looked back to her alma mater to see what opportunities were there, and became the first student in a newly launched PhD program.

“They dropped an assistantship in my lap and Carol Tenopir called to see what I wanted my hours of work were because I would be working with her – I was delighted to be working with her but I didn’t know I had a job,” she said. “I could go to school and get paid and not have to work. I had two little girls and I thought that would be great.”

Albright said that, the day she set foot back on to campus is when she knew she wanted her next career step to be as an academic professor. By yet another twist of fate, she was hired by the School of Information Sciences as an assistant professor after she graduated; it’s quite uncommon for schools to hire their own graduates, but Albright said it was fortunate that things worked out at the time.

Much of Albright’s research centers on Africa, so when an opportunity came up for her family to move to England, she took it. It was easier for her to travel to Africa from England, and for three years she did just that. Then, she moved back to the United States and took a job at the University of South Carolina, where she was professor in the School of Library and Information Science and director of the African Studies Program.

Now, for the past four years, Albright has been the director of Kent State University’s School of Library and Information Sciences. Her term as a director will actually end June 30, after which she will become associate dean of the college – a move that will allow her to get back into engaging research, she said.

Throughout her journeys in academia, Albright always comes back to her experience at the University of Tennessee. She still sees peers at conferences, and has even lectured for SIS. She continues to work with Dick Kawooya, a PhD graduate whose work also centers around information science issues in Africa.

“I felt my PhD program really prepared me in terms of theory, better than most. I hope to stress some of that here [at Kent State],” she said.