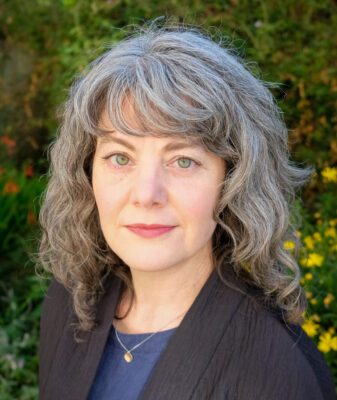 What is your professional background?

For my undergraduate degree I studied painting and sculpture at Hampshire College. After graduation, I didn’t have plans and went on a road trip with a friend to California. I thought I would be here temporarily but I have stayed in the Bay Area ever since.

For the first decade or so I made art and worked part time in offices for architects, artists, and writers, and I ended up getting really good at providing administrative support for creative people. Eventually I decided I wanted full time work and I got a job at a local science museum called the Exploratorium as a project manager.

I started out there in the exhibition development group working with an interdisciplinary team on a project called the Geometry Playground. I loved the place and the work and stayed there for almost 10 years. I helped the museum move from its original location to a new one on the waterfront in San Francisco in 2013, which was a total high point in my life and professional career. It was really incredible being a part of it.

After that, the focus was less on big exhibition projects and more on settling into the building so I began looking for other places where I could be part of similar creative development work. I got a job at X the Moonshot Factory, formerly known as Google X, managing prototyping projects in a fabrication shop with a whole bunch of interesting creative people from different backgrounds. I did that as a contractor for a while, and then later was asked to come back on another contract with their central design team supporting the folks who develop user interfaces and do research and usability testing and industrial design. I was hired on at X permanently in 2018 and eventually joined an internal aquaculture sensing project called Tidal.

The pandemic happened and I was working from home on this aquaculture project, and though I loved the project and team, I got very introspective – which I think happened to a lot of people around then – and found myself thinking about what I wanted my next 20 years of working life to look like. I did a bunch of self-reflection and writing and looked for different themes, and realized that all throughout these experiences I was always organizing people and information to solve various problems. I also recognized that I enjoyed having  variety in subject matter and wanted to always be learning new things. Ever since Hampshire, art and design have remained important to me throughout my career. And one of the projects I had the most fond memories of was at the Exploratorium focused on social and natural forces that shaped San Francisco, where I got really interested in geography, maps, and local history.

As part of my search I looked at a lot of job descriptions, and early in 2021 I found an interesting one for a role at the David Rumsey Map Center. I was familiar with it because I had worked with David Rumsey’s maps for that geography exhibit.

He has given his collection of maps to Stanford and they created the center to make them accessible to students and the public. He’s worked on digitization of his collection since the late 90s and those surrogates are available on his website (davidrumsey.com) and through SearchWorks at Stanford Libraries. The archival materials can be viewed in person at the Center. They have a couple of large scale screens which can be used to inspect the high-resolution surrogates and other interactive technology. They are doing work that is related to many of the career themes I’d identified, so I became very focused on that place and started forging a path thinking, “What do I have to do in order to get a job in a place like this?”

I reached out to a professor in the field that I know to get advice about MLIS programs and based on what I told her she recommended UT. She gave me a short list of other places but Dr. Wade Bishop’s scholarship in this area really stood out. So I applied to UT and was accepted.

I feel very, very lucky to have found my way to the program and to have found Dr. Bishop, and I keep making discoveries about how the field is right and the program is right, and now I’m working already with the maps, which is super exciting.

You got a rare map librarian job after one semester in the program. How did you do it?

I had set the David Rumsey Map Center as my North Star, thinking I am headed towards this, and I will make decisions while I’m in this program that will enable me to work at a place like this someday. Last semester in the Academic Libraries class with Assistant Professor of Practice Joy Doan, we had the assignment of doing a job analysis which required looking at various job descriptions and assessing what skills and experience we’d need to build to qualify at graduation.

One of the job descriptions that I looked at is for the one I have now, and when I read it I thought, “I can already do a lot of these things.” They were looking for someone who had project management and exhibition experience and other skills I have, but I don’t have the degree yet. Dr. Bishop said, “Why don’t you just apply?” And I was like, wait, you can do that? Professor Doan also encouraged me to apply and helped me with my CV and pointed me toward great online resources about interviewing for academic jobs. So I went for it and I applied and ended up interviewing for the role last November and being offered the job in January.

The position is 30 hours a week and a 2.5-year position, so it actually works pretty nicely to have school and to have this as a part-time job, it’s a good combination. There are many things I’m doing already that build on my prior knowledge. I’m making a digital exhibition right now assembling artifacts that have been curated by historians and professors who are contributing to a conference later this month. There’s not much content work there, it’s mostly just organizing the information.

What do you think of the program so far?

What feels really useful to me in this program is the combination of theory with real-world preparation, like with that assignment, the job analysis one. I told other people about that assignment, friends who are in other fields, and they say they’re trying it themselves while they’re looking for jobs. It’s so practical because you’re going to graduate and will have already thought deeply about what you need to do to achieve your goals. I’m really grateful for that, the program has a great combination of the practical and theoretical.

I really thought I wouldn’t be able to get a job like this until after I graduated. I’ve heard many different people throughout the process now say so much of what you learn in library work, you learn on the job, but this short time in the program obviously prepared me well. As an example I’m taking the Digital Curation class right now and I’m also learning how to work with Stanford’s digital repository, so all of the theoretical stuff I’m learning is very real in my day-to-day.

The three core classes and the academic libraries class I took last semester, I could not have done the interview for this job without having taken those classes. I got a question in the interview process that was about service and I was able to tie the work I did at X of helping people with their requests for design work and prototypes to a reference interview. So the classes provided foundational understanding and vocabulary. And Professor Doan’s Academic Libraries class gave me an idea of who I was talking to and what kind of operational context they were in.

What’s next for you?

What’s next is to work through this phase and keep learning. Maybe I stay in this library, maybe I stay with maps and historic information, maybe I learn about something else along the way. I sort of knew from the beginning that there were a lot of things I didn’t know and I wanted to be sure when I went through the program that I’d be open to other possibilities that I didn’t know existed and could explore.

The research data management and the GIS piece of it, those are things I want to work on more. I’m in this great spot to be able to learn that, particularly how historical map archives become data and are used as data. There’s a bunch of different avenues that people are pursuing for deriving data from historical map collections and that’s something I want to learn more about.

There are a lot of things that I did in previous jobs like when I was at Google X that involved information and data management and I didn’t really know that’s what I was doing. Now with more formal training around that, I could see that as another potential option. I don’t think you have to pick one thing necessarily. People have their full-time jobs working in libraries but they also work on other projects. Part of what drew me to the idea of librarianship is that you can get a lot of variety by supporting other people in research and there are a lot of opportunities for that out there in different fields.