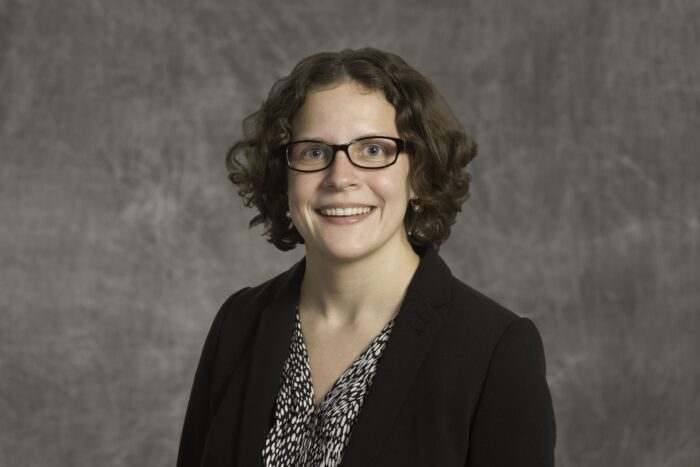 Kelsey Badger came into the School of Information Sciences master’s program with the honor of being accepted into the Collaborative Analysis Liaison Librarians (CALL) program, and she will continue that tradition of excellence with the honor of being named a University of Tennessee, Knoxville Volunteer of Distinction: Extraordinary Professional Promise. She’s also already accepted a position at the Ohio State University as a research data librarian, which she will start after she graduates from SIS this May.

SIS Clinical Associate Professor Carolyn Hank nominated Badger for the award, stating that she has exceptional work ethic and outstanding academic work, and also noted the new position she is stepping into this June at OSU.

“‘New’ does not just mean a new job for her; it means a brand new, tenure-track faculty appointment where Kelsey will lead the way in developing multidisciplinary data services that expand beyond just research data management (RDM). Wow! This is simply fabulous, and I am already plotting how I will invite Kelsey as a guest lecturer in my future courses on digital and data curation,” Hank said.

Badger’s initial interest in information sciences was prompted by the data work she was conducting for the Early Childhood Project in Chicago, Illinois, a collaboration between the Illinois Department of Children and Family Services and the Erikson Institute. She saw a need for better data management and data usage in the social services, which if implemented could be impactful at organizational and individual levels. While she initially foresaw herself going back into social services to apply her new knowledge skillset, she now believes more change may be effected if she conducts research to show how providing social services with data management resources could impact the field. Her new position at OSU is tenure-track and provides her with the opportunity to do such research.

“Data is power now, so being able to empower organizations that serve more marginalized populations to make the same use of their data that for-profit institutions are, is important,” Badger said. “Not all [organizations] have the same support in staffing and training to take advantage of data-based knowledge and enhancement. It’s common at universities and business, because it’s lucrative, but I’m passionate about making sure that smaller social service providers are not overlooked in that.”

Though she did leave her position at Erikson Institute to be a full-time student, Badger tailored various projects for her courses around child welfare data and even collaborated with her former employer to create a database prototype for the organization as part of her database management systems class with SIS Professor Peiling Wang.

Badger said the SIS program has provided her with plenty of hands-on opportunities to apply the theoretical knowledge she’s learned, especially through the practicum she is currently completing with the U.S. Geological Survey (USGS). In particular, she observed how they utilize communities of practice to support data management and integration, which gave her an idea she pitched during her job interview at OSU. Communities of practice recognize that groups of people with similar research or professional interests often share similar data challenges, and within that can lie a wealth of collaborative opportunities.

“They asked me to speak during my campus interview about my vision for research data services. I suggested communities of practice as a form of data programming that would be useful because it allows expertise that already exists on campus to be shared across constituencies. Because data is a big topic with a lot of specializations within it, the library will never be the sole expert on it, but we can leverage the expertise that already exists on campus,” Badger said. “There is a lot of research on the fact that scientists across disciplines mostly go to their colleagues for information, especially about data. Rather than fight that reality to provision data services solely from an organization where people aren’t seeking out data services, we can join that conversation by organizing and promoting these communities to create data services through quiet leadership.”

While CALL has facilitated many opportunities for her, Badger also credits faculty who have taught and mentored her during the program with giving her support and resources that enhanced her understanding of information sciences and her chosen area of research. She said Hank was always an avid supporter in letting her tailor assignments to her interests, and that SIS and Chancellor’s Professor Suzie Allard—her CALL supervisor—introduced her to several social work experts on the UT campus. She also collaborated with College of Communication and Information doctoral student Monica Ihli, who formerly worked at UT Libraries, on several projects. This includes learning how to code in Python from Ihli so Badger and other CALL students could create a visualization project to display the Bredesen Center for Interdisciplinary Research and Graduate Education’s research impact.

“In general, the amount of connections that CALL gave me was extraordinarily valuable, and I don’t mean that in just a networking way, but the diversity of experiences and perspectives has been huge,” she said. “…reflecting on it as a whole, I’ve learned a lot and I’ve had so much support and so much mentorship.”