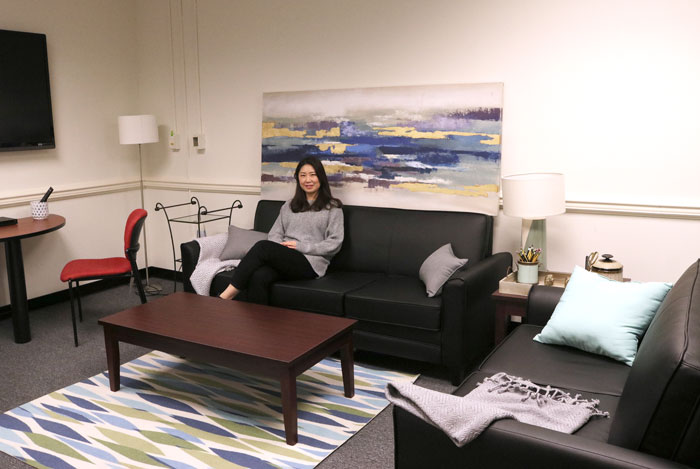 UX Lab Manager Songhee Kim sits on a couch in part of the Message Effects room, which is available for user research.

At her heart, Songhee Kim is an artist, and she’s found ways to incorporate that into her career path over the years. She earned an undergraduate degree in 3D animation and visual effects from the Academy of Art University in San Francisco, and went on to work for projects such as Disney Junior’s “Sophia the First” and CBN’s “Superbook.” Now she is the College of Communication and Information’s User eXperience Lab manager and graphic designer, as well as a graduate student at the School of Information Sciences.

Kim met her now-husband in Seoul, Korea, when he was stationed there with the military. He is from Knoxville, and they decided to move back home in 2018 to be closer to his family. Once she settled into living in a new city, she realized there weren’t many local jobs for 3D animators so she began doing remote freelance work.

“It got really lonely doing freelance work, and I didn’t know anybody here except my husband’s family,” she said.

As her husband was active duty military and now serves in the Tennessee National Guard, Kim qualified for the GI Bill to pay her tuition, so she began considering furthering her education with a graduate degree. User Experience Design and creating user interfaces had become an interest of hers over the years, even while she was still in the midst of her 3D animation career. When she saw that the University of Tennessee, Knoxville, had a graduate program that included a UX Design pathway, she knew that was what she wanted to pursue.

“As a millennial, I experienced all the changes of going from mobile phones to smart phones, and using apps for everything. That just changed our lives, and I was intrigued by that,” Kim said.

UX Design plays an integral part in how websites, applications, software, and other digital platforms with interfaces are created. It uses an iterative process to ensure programs help intended users to efficiently complete whatever task they came want to do, whether it’s to order food off a menu or to manage a complex project.

In her first year of graduate school, Kim gained enough knowledge about information sciences to be hired at a public library in Clinton. It was a job she said was a lot of fun, but being a public librarian isn’t her endgame. She continued to take classes in the UX Design pathway, including Human-Computer Interaction and Usability Testing and Evaluation.

“The classmates in my usability class were very good, I learned a lot from my peers and they’re very supportive and very UX-oriented, so they had a lot to share. I really enjoyed that,” Kim said.

She also took on an independent project class with SIS Associate Professor Vandana Singh, wherein she created her own website and portfolio.

“Those classes were really helpful to build my portfolio, and Dr. Singh helped me build my website and that was extremely helpful. Because I had that portfolio, it helped me to talk more in my interview [for this job] about my UX knowledge,” she said.

Everything that happened since she began her graduate program led up to Kim applying for and accepting the role as the UX Lab manager and CCI’s graphic designer. As lab manager, she assists students with all of the various programs and equipment available to them in both the UX Lab and the Messenger Effects Room. The lab is also available to other departments and organizations to undertake contractual work, such as user testing, heuristic reviews, and

The graphic design portion of her job at CCI allows her to flex her impressive artistic chops by designing various print and digital materials for the College and its four schools. But the UX Lab position is challenging her to call on everything she’s learned while in the SIS program. She’ll be graduating next year, and while she doesn’t know what may be down the road for her, right now working at the Center for Information & Communication Studies (CICS) as the UXLab manager is helping to grow her skillset.

“I’m happy to be learning all the tools here. I do demos for students and I help set people up with the equipment when they’re doing research,” she said, noting that if researchers build a portion of their grants to include her and the UX Lab in their proposals, they can then go on to hire her to do UX work as part of their funded research.

The UX Lab has three rooms, one of which is used by researchers to observe users as they navigate programs on computers. The Lab’s equipment allows students and researchers to collect a lot of tangible data, Kim said, such as eye tracking devices that shows where people are looking on screens, where their eyes linger or what they miss. There’s even a device that recognizes and records facial emotions, and another piece of equipment that can sense heart rate, sweat, and other bodily indicators that could lend insight into reactions users have when tests are being conducted.

“I think it’s really helpful because it provides a lot of tangible data,” she explained.

Those who are interested in booking time at the UX Lab or Messenger Effects room can do so by emailing Kim at uxlab@utk.edu.