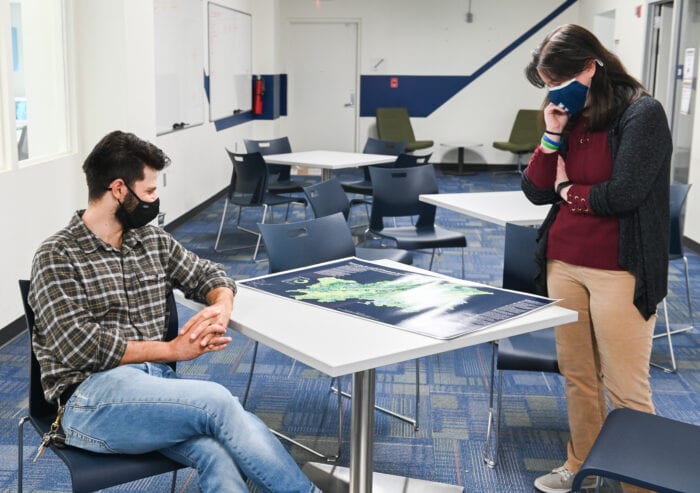 Information is delivered in many forms, and for MSIS student Charlie Mix, maps are his deliverable of choice. Mix earned a bachelor’s degree in geography and went on to work for the National Park Service and for land trust and watershed conservancies before landing at Interdisciplinary Geospatial Technology Lab at the University of Tennessee, Chattanooga, five years ago.

Two years into his career at the IGT Lab, Mix was bumped up into the position of GIS director, which he’s held for the past three years – he jokingly suggests that he’s doing his career backwards by becoming the GIS director first and then getting his master’s degree, but he feels the MSIS program at the University of Tennessee, Knoxville will expand his understanding of information and data.

“I’m just really passionate about GIS and geographic information, and really about just being able to tell stories through data and inform better decision-making, specifically when it comes to issues related to environmental conservation,” Mix said.

This passion, and a desire to better understand the user end of information, is why he decided to pursue his graduate education in information sciences. He started the program this semester by taking a class and will be working with Associate Professor Wade Bishop this summer on an independent study project.

“For me, one of the takeaways in the first semester is that it’s helped me understand how to communicate really complex analyses and data to a variety of different people,” Mix said. “I also want to get a deeper understanding of managing databases and data visualization and hopefully get better at scientific communications to round out my skillset.”

That skillset has been put to use over the years to focus on conservation efforts, most recently culminating in the creation of a map as part of the “Preserving the Cradle of Southern Appalachia” effort. This is an effort that started about 10 years ago when Chattanooga’s economy began booming and along with that, the city began physically expanding.

Chattanooga is well-known for its outdoor recreation opportunities and, among certain crowds, for its impressive biodiversity. Community leaders who wanted to foster responsible economic growth and protect these outdoor spaces collaborated to create a coalition of environmental conservation groups and outdoor recreation proponents to create the Thrive Regional Partnership. Mix, who sits on the conservation steering committeeof the organization, said there are now more than 30 land trusts, watershed conservancies, outdoor recreation advocacy groups, and state and federal agencies participating in it.

Mix’s map came into fruition after the Partnership identified conservation goals to protect 50 percent of the existing unprotected habitat in the 16-county region around Chattanooga, and to delist 50 percent of the EPA-listed streams.

“I mapped out the habitat cores, which are areas of intact habitat without a road or a city in them, which are essentially large blocks of forests. I mapped out wildlife corridors, and also highly climate resilient areas that offer species and ecosystems places to move through the landscapes and find their niche environment…we also mapped where all of our protected lands are to quantify how much land protection there is,” Mix said.

Since its completion, the map has been used by organizations in the Partnership to communicate goals to stakeholders and even to garner grants and funding. In fact, the Open Space Institute said the map was integral in its selection as one of three regions awarded money for conservation goals, with the 16-county region securing $5.3 million to go toward its efforts.

“It’s super cool to see other groups adopting it, I’ve gotten a lot of great positive feedback from the alliance.I think one of the biggest utilities of the map is to see how it’s fostered collaboration, and now it’s spreading out and other groups are using it for their work,” he said.

On top of the map fulfilling so many practical functions for education and conservation, the map also won best in conference and best in cartography at the 2020 Tennessee Geographic Information Council conference. It was also selected out of maps from all over the world to be featured in the 2021 Esri Map Book, Volume 36 Esri software, the GIS software used to create the map.

Mix said this map is a great example of how data visualization can be integral in communicating information to broad audiences in an easily digestible way.
“You can tell a story with the data through maps, and that’s what we’re gearing towards with this,” he said.

Additional articles to check out:

Map Stakes Out Regional Areas Needing the Most Environmental Protection