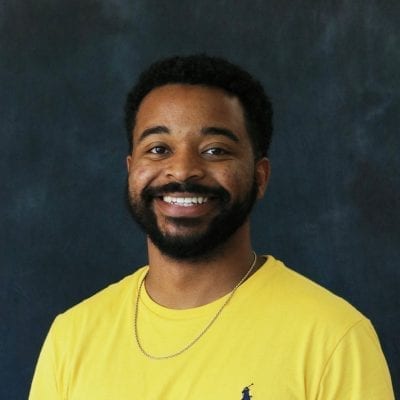 After a year in the MSIS program, student Kay P Maye is seeing information in a new light, through what he says is a critical lens that he’s learned to use.

“I got into [information sciences] because I wanted to do something different, but still related to the social sciences, and now I feel like I’m getting a lot of personal stuff out of it,” he said.

He entered the program after two years of teaching high school English, with a desire to enhance his understanding of English and perhaps to become a public or school librarian after graduation.  But learning more about the way information is disseminated, collected, and stored, has stirred his interest in data management, research management, and academic librarianship.

His newfound passion for information sciences has also pushed him to turn that critical lens onto the field itself, specifically at the field’s lack of diversity in its workforce.

“Being an SIS student has pulled me into this way of thinking critically and I think that looking through the lens of information sciences been eye-opening,” he said. He’s started asking questions such as, “Why aren’t there more people who look like me, a black man, in information sciences?” and has plans to pursue research in that area as an independent study this fall under SIS Assistant Professor Carolyn Hank.

His desire to pursue social justice research is part of what pushed him to apply for the ALA Spectrum Scholarship, which is awarded by the ALA Office for Diversity, Literacy and Outreach Services to racially and ethnically diverse information and library sciences students. Maye was in the grocery store when he got the phone call telling him he got the scholarship, which was uplifting news during a time filled with heavy current events.

“I almost felt like being in grad school through this time has been very weird, and I get those moments where I think, ‘We’re in graduate school in the middle of a global pandemic.’ And this scholarship gave me reassurance that I’m on the right track,” he said.

The scholarship provides Maye with funding and an opportunity to attend a summer leadership institute with other Spectrum Scholars. He said the chance to meet “more people who were interested in library science who look like me,” was one of the other reasons he had hoped to be awarded the scholarship.

While he doesn’t know exactly what the future holds for him, Maye said that his time in the program has already been one of the most exceptional educational experiences he’s ever had. He has no doubt that he’s found his niche in information sciences.

“I know that no matter what I do with this degree I’ll be fulfilled,” he said.