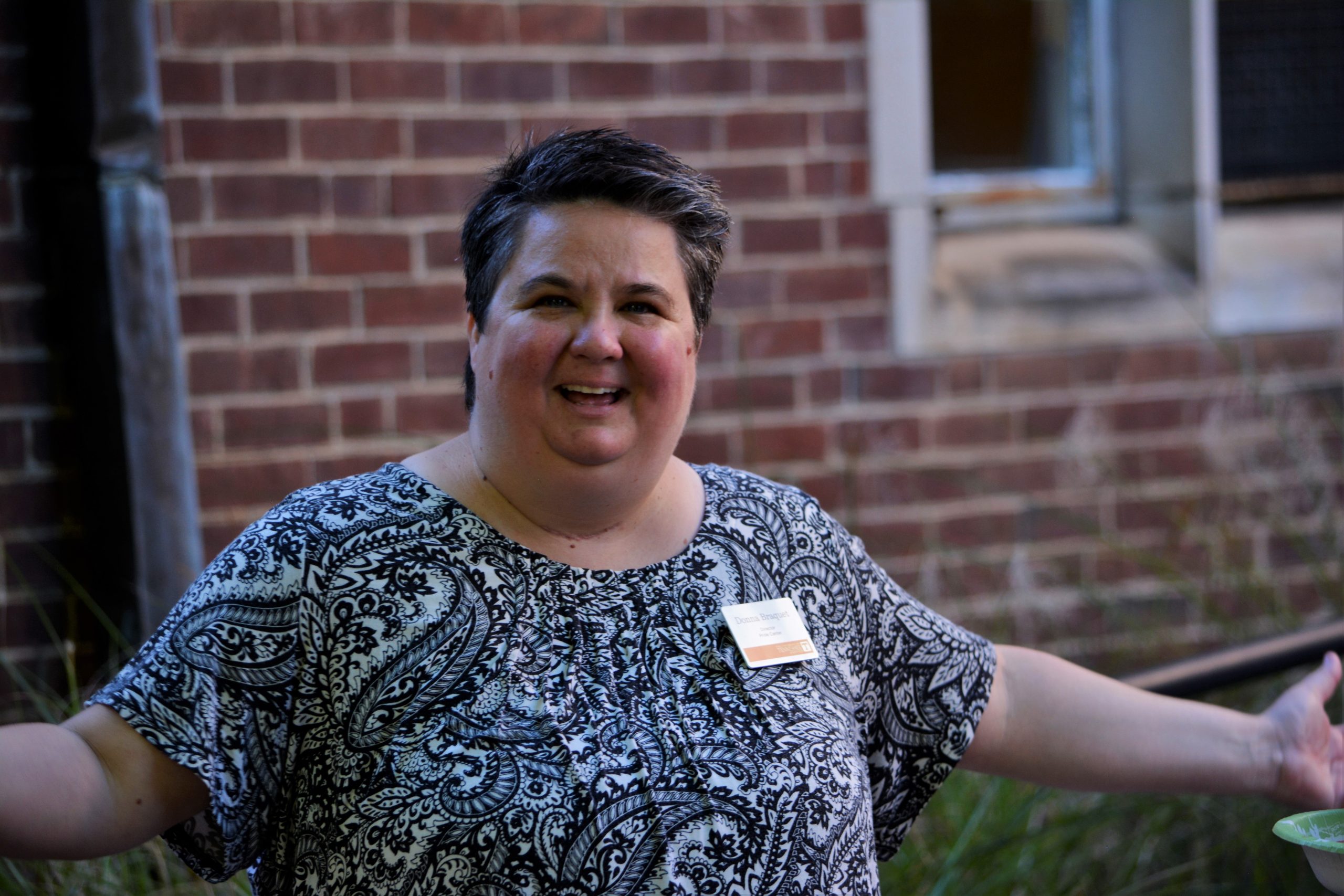 Director of Voices Out Loud and Research Librarian Donna Braquet

Voices Out Loud is an archives and oral history project started by UT Research Librarian Donna Braquet, who felt like there needed to be a resource chronicling the history of LGBTQ+ people in East Tennessee. Various pieces make up the collection, including three projects SIS students have worked on over the past year.

“I think it’s important for us to collect and preserve these stories because one of the things that I’ve noticed in working with the students in SIS and some of the other students working on this project is they’re always amazed to find out there have been gay people here in Knoxville and East Tennessee doing work in the 80s and 90s, even the 60s and 70s, there were drag shows and things like that. In the 90s there were Pride protests,” she said. “It’s really important for them to have a sense of history and that LGBT people have always been in East Tennessee. You don’t have to go to New York or Chicago or San Francisco to be gay, and you can carry on the legacy of the queer elders who came before you, and this Voices Out Loud project is bringing that to light.”

Braquet is the liaison at Hodges Library for the following areas: Biology, Child and Family Students, and the Women, Gender and Sexuality program. While that keeps her plenty busy, she likes to volunteer and was integral in creating the University of Tennessee, Knoxville Pride Center. She was the Pride Center director from 2010 to 2016; in 2016, state legislation defunded the center.

“The Pride Center was a huge part of my life, I dedicated a lot of time and effort to creating it from the ground up, so when that was taken away abruptly, I had a hole in my life and was searching for how I can continue to make a difference for the LGBTQ community and I thought, let me use my expertise as a librarian to create this LGBTQ history project in the archives,” she said.

She said it’s easy for people to think that East Tennessee didn’t have an active LGBTQ+ community, but that’s just not the case. She hadn’t seen anyone else working to record that history, so Voices Out Loud was born – and various student projects have added to the archive since its inception. In honor of all the work she has done on this project and others, Braquet was given the American Library Association’s 2020 Rainbow Round Table Award for Political Activism.

One project was started by a rumor about the existence of posters depicting bars and bar life dating back to the 1970s. Recent MSIS graduate Leah Cannon joined Braquet in digging out the posters from the McClung Collection at the East Tennessee History Center, and then Cannon photographed all the posters and created an interactive map of where gay bars were located throughout Knoxville, along with information about each bar.

“I moved to Knoxville from Middle Tennessee and I wanted to connect with Knoxville and East Tennessee’s LGBTQ+ history and community, so the gay bar posters project gave me that connection,” she said.

Braquet said the handmade, hand-drawn posters were created by Samuel Lowe, and included information about the bar such as the location, the name, who managed it, and the years it was in operation. The posters depict scenes including people inside the bars, drag shows, or the outside of the bar.

“As we learn and find out more either through our oral history interviews or doing research in old newspapers, we continue to create this map so people can see that Knoxville is a queer space, and all these queer events and queer people were all around Knoxville,” Braquet said.

In another Voices Out Loud endeavor, summer 2020 MSIS graduate Lisa Curtin took on another archiving task with James Spears, who completed his undergraduate degree in spring 2020 at the University of Tennessee and is entering the MSIS program this fall. They created high quality scans of the 1990s newsletter “AWARE,” which was produced by and for the university’s Gay and Lesbian Student Union (later on it became the Gay, Lesbian, and Bisexual Student Union). They also used optical character recognition (OCR) to make the newsletter content searchable, and they created metadata to accompany each issue. All of the newsletters were uploaded into the Voices Out Loud database in OMEKA to create a digital library.

“UTK students can come here today and look and see what people were doing 30 years ago and say, ‘OK, I’m not the only one.’ And they’ll see that we might still be fighting for some of the same things, but they can also see that a lot has changed,” Braquet, pointing out an issue that was calling for legalization of same-sex marriage.

Spears said he became involved in the project by way of his fiancé, an SIS alum. Once he started working on it, he realized how important the work is that information professionals do, which inspired him to enter the MSIS program.

“The biggest thing I have taken away from the Project it that every group of people has a story that’s worth exploring and there have to be people who know how to organize and share those stories. The LGBTQ community in East Tennessee has a vibrant past and present and its stories deserved to be preserved and shared,” he said.

Curtin said working with Voices Out Loud gave her perspective on the need for inclusivity in libraries and archives.

“Access to historic materials brings history to life in a way that is really unique–not like seeing it in a museum or on TV or in a book–and working with the documents I did gave me a much clearer and, I think, more real understanding of the LGBTQ+ community in East Tennessee over the past 30-40 years,” she said.

Braquet said it is also notable that the AWARE project wouldn’t have existed if Knoxville resident and UT employee Ed White hadn’t saved all of those issues and subsequently trusted the library to archive them for public consumption.

“It’s really important to me to see how librarians can make connections to the community, because they’re the ones who have access to the community and they have to be able to trust us. I try to talk to the students about that, too, that we’re privileged to have these materials that people are willing to donate,” she said.

A third project was completed by Katie Hill, who was a practicum student with the program. Hill organized and archived part of the print collection donated by Ed White and several other community members. Hill created a tutorial for community members who collect such items, walking them through how to organize and preserve their materials until they’re ready to turn them over to a collection.

Hill also created a short guide video for future students coming to work on the Voices Out Loud project to help with sustainability, Braquet said. Students from a variety of disciplines come to work on the project, and this helps them easily get up-to-speed. Braquet said the help from SIS students has been particularly advantageous because her background is not in archives, so she’s been learning archiving skills as she works alongside them.