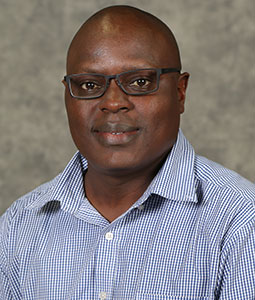 When Dick Kawooya first traveled from Uganda to the United States in 2001 to study library science, he had only expected to stay for one year. Now, Kawooya is an associate professor and just finished a year as interim director of the School of Library and Information Science College of Information and Communications at the University of South Carolina.

Part of his Kawooya’s journey includes graduating with a doctoral degree from the University of Tennessee, Knoxville College of Communication and Information, with an emphasis in information sciences.

Once Kawooya decided he should get his PhD in the United States, with the help of Professor Wallace Koehler Director of the MLIS program at Valdosta State University, he started looking at various doctoral programs and decided UT was a good fit. He reached out to SIS and Chancellor’s Professor Carol Tenopir, who helped him find a scholarship, research work, and teaching assistantships to help him through the program. He started the program in the fall of 2002 and graduated in 2006.

“It was a very positive experience and I can trace much of my research from the work I did there, and the publications I put out at that time, specifically from the communication law class. That’s where I really started out in the area of intellectual property and access to information,” Kawooya said.

He was recruited by the University of Wisconsin-Milwaukee for optional practical training after he earned his doctorate, and was then asked to stay on another three years there; this was during the 2008 recession, and was too good of an opportunity to pass up, and a large part of why Kawooya stayed in the country.

His current research is based primarily in Africa, where he focuses on intellectual property issues, specifically the intersection between intellectual property and innovation, and copyright and access to information. He believes he’s been more successful in helping others through his research by being based out of the United States than out of Uganda, though he does visit his home country regularly for work and to visit family.

“When I was a student in Tennessee, I was able to help build a partnership between the university libraries between the UT library and the biggest university in Uganda, Makerere University. There were a couple of exchanges, with people from UT going there, and some came here, and they worked on a number of joint projects,” Kawooya said.

Makerere University is also his alma mater, where he earned a bachelor of science in library and information science.

After working in Wisconsin for five years, he started on as an assistant professor at the University of South Carolina, and then he was tenured and promoted to associate professor in 2018, where he continues to teach and conduct his research.