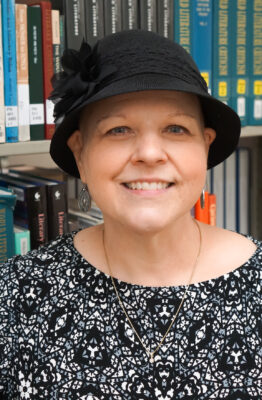 Susan Jennings (’07) didn’t start out with the dream to be a librarian, but in hindsight, she believes it was pre-ordained. After all, she and her family were voracious readers, she was a library page in junior high school, and she drove her mother to the public library every Saturday where they’d spend an hour or two picking out books. It wasn’t until she ended up working in Appalachian State University’s (ASU) library after moving back home to Boone, North Carolina, that it all coalesced.

“Eleven years later I was still there and loved libraries and loved that I was at an academic library and was encouraged by a lot of librarians to go to library school. So it changed from being just a job to a vocation, a calling. When it becomes a calling, you have no other choice but to pursue that, and it’s a burning passion to get that done,” she said.

She began looking for the best way to get her master’s degree and become a librarian, and after a couple of dead-ends, she found the University of Tennessee, Knoxville’s School of Information Sciences. As a longtime University of Alabama fan, Jennings is the first to admit she never imagined attending UT—but she’s grateful she did.

“I can’t imagine what my life would have been like not having gone to UT and forming the professional and personal relationships I have gained from that experience,” Jennings said.

Jennings was working at  Virginia Commonwealth University Library in Richmond when she started the MSIS program. At that time, students would come to the Knoxville campus for a two-day orientation to meet faculty and learn how to attend classes virtually. She had been set on studying archives, given her history background, but not in the area of records management—something she had done before and did not enjoy. At orientation she learned the archives courses at that time centered around records management, so she quickly made a switch to academic libraries and public services.

Her passion was in public services, and she jokes about holding a record for being the student who took the most reference courses from the late SIS Professor Dr. Bill Robinson. It was through those classes that Jennings and Robinson formed a friendship that would last until he died in 2021.

“I had mentors along the way, and Dr. Bill was definitely one of my mentors, so even after I graduated I would email him and would tell him about a situation or ask him a question and he was very practical and no nonsense. He did not give me the answers but he gave me food for thought to come to a good conclusion,” she said. “I feel like he’s still here supporting me as a mentor even after he’s gone.”

She finished her last year in the program working as a paraprofessional at Appalachian State, and after graduation, they hired her to be the Lead Librarian for Desk Services. She was on the  tenure-track at ASU when she received a call from one of the many people she had networked with in Tennessee.   The assistant director of Human Resources at Chattanooga State Community College wanted to know if she knew of anyone interested in being their new library dean. Of course, it didn’t occur to her until after the call that the real reason he contacted her was to see if she was interested in the position. So she applied and got the job in 2012, which turned out to be ideal timing for her personally and professionally.

“My parents were both living in Northeast Alabama  so this brought me closer to my aging parents, and as time would tell, that became crucial as I became caregiver for them,” she said.

One of the proudest moments of her career happened shortly after she stepped into her role as dean and someone handed her plans for a complete renovation of the 22,000-square-foot library, “down to the studs.” It was also one of the most daunting moments in her career.

“Things didn’t work, there were delays, and all the kinds of stuff that always happens with a major building project happened. So I’m most proud of completing that and keeping my folks and myself from having a nervous breakdown. That was nine years ago and I just continue to see how well the library works and is embraced,” she said.

She’s also proud of how her library staff responded during the COVID-19 pandemic as they quickly shifted to serving patrons in other ways when their physical doors were closed. She was recognized with a staff excellence award for having the idea to take the library’s chat service and use it to open 46 virtual offices for other departments and faculty so they could better work with students.

While she’s been in her position for a decade now, Jennings said she could not have done it without all of the support and mentoring she received throughout the years.

“I didn’t aspire to be a dean or administrator, because I wanted to be a librarian. That’s a whole different set of skills you need to learn in order to do that. So I took things from my supervisors who I loved and I took lessons from supervisors I didn’t love,” she said. “Those things inform your management style and leadership style, and hopefully somewhere in the middle, you come out OK.”