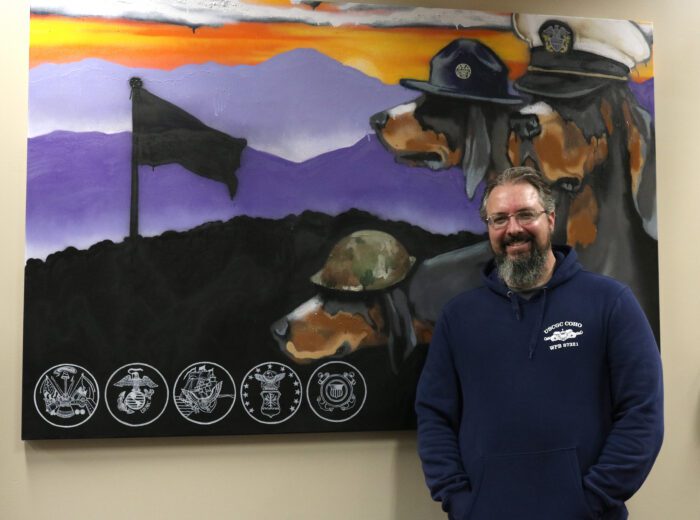 MSIS student Chad Lanctot with a painting that is in the Veterans Success Center.

It took a decade for Chad Lanctot to finish his undergraduate degree, and for good reason: Lanctot was in the U.S. Coast Guard and was taking online classes while he actively served. It was tough going but once he was done and retiring from the Coast Guard, he knew that more higher education was his future.

“I was talking to some of my mentors and supervisors about graduate programs, and one of them, Commander Valerie Boyd, said, ‘You can definitely go, you have what it takes.’ That was the confidence boost I needed, to hear. When a senior officer of her caliber tells you, you can do it, you do it.  She boosted me to a new level. She was one of several people who, through casual conversation, changed the direction of my life,” Lanctot said.

So he started researching graduate programs and trying to discover exactly what fit with his undergraduate degree in history and with his other interests, which include research, process improvement, and problem solving. Eventually he found information sciences and everything clicked. He applied to two schools, including the School of Information Sciences at the University of Tennessee, Knoxville, and was accepted into both. He settled on UT because it offered a broader program with opportunities for graduates to use their degree at a variety of jobs. It’s a good thing he didn’t settle for a program with a more narrow scope, because Lanctot’s vision for his future has shifted since he started the MSIS program.

“Originally I wanted to come in to study archives and document preservation, but working with Drs. Patillo, Dobreski, Bishop, and Allard got me interested in research data management. This program is more robust than I realized with a lot of areas to explore,” he said.

Lanctot had already decided to move to Knoxville to be an on-campus student, as he wanted the full university experience that he didn’t get when attending the all-online American Military University during his active-duty days. He’s glad he made that choice and has embraced the Volunteer spirit he says is pervasive throughout Knoxville.

“It’s more than the Volunteer spirit, it’s the quality of the professors and the people who are here; they’re people who want to help you and want to see you succeed. They don’t hold your hand but they point you in the right direction and are always happy to help connect you to opportunities,” he said.

One such opportunity came after he did something of a practice run by applying for a job at Oak Ridge National Lab—Lanctot said he had no expectation of actually getting the job, but it was the first time he’d ever written a resume and applied to a position. He got an interview but not the job, and said he was pleased with the overall experience. But through that process he became better acquainted with Amy Forrester, MSIS alumna and the assistant director of the Center for Information and Communication Studies. Forrester offered him a student worker position at CICS. That position has allowed him to connect with faculty at SIS as well as with others in information sciences professions that opened up an opportunity for him to conduct a practicum with the United States Geological Survey.

While Lanctot has received enormous support from SIS, he gives great credit to the UT Veterans Success Center for providing the kind of support and resources veterans transitioning out of the military need to be successful.

“The Vet Center was one of the first places I called when I got accepted, and I don’t recall who I spoke to but I won’t forget the content of the conversation. I was still on active duty and had a lot of concerns and questions, how do I use my GI Bill, etc. They told me that, as soon as you come to town, come straight to the Vet Center,” Lanctot said, noting he followed their advice and made that his very first stop when he arrived in Knoxville.

He enthusiastically embraced the community of veteran students at UT and started an unofficial meetup for students, and said he would love to extend that to distance education students so they can feel included. While all students have their challenges, Lanctot said veterans can often feel isolated from other students because of their unique experiences. “Having a place on campus where veterans can meet, network, study, and decompress has been essential to my own success and the success of our student veteran community,” he said.

“Everything [military personnel] depends on gathering information, and with computer servers, there’s no reason not to store all of it. I maintained a large database of everything from planning and maintaining maintenance schedules to documenting major or unique repairs to provide a knowledge base for the person who transferred into my job. Based on my experience in the military and at UT, information sciences is a perfect fit for anyone in the military who dedicates their time to gathering, organizing, interpreting, and storing information,” he said.