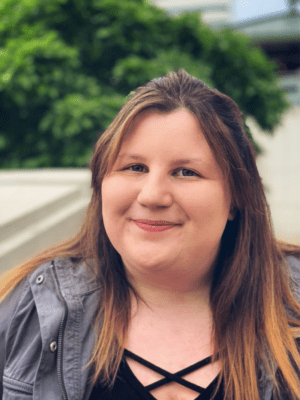 Makayla Lerner is the first undergraduate School of Information Sciences student to complete a practicum, and just this last week she won first place in the College of Communication and Information’s 44th Annual Research Symposium’s Research Poster Kaleidoscope contest. The research she presented in her poster stemmed from the practicum and undergraduate research assistantship work she has been doing with the University of Tennessee Institute of Agriculture’s Extension programs.

Lerner has participated in three projects with UTIA that all have a focus on broadband internet in rural communities—hence the title of her poster, which aggregated research from all three projects: Bridging the Digital Divide: Community Programs Targeting Broadband Access and Adoption in Rural Tennessee.

None of this would have happened if Lerner hadn’t decided to move from Ohio to live with her dad in Anderson County shortly after the COVID-19 pandemic started. She was enrolled in the University of Cincinnati in an engineering program and continued her classes there online after moving, but it was soon apparent she wasn’t enjoying the program any more. She switched to computer science at UoC but felt that wasn’t the right fit for her, either.

So Lerner began exploring universities in the East Tennessee area to see if there were any programs that piqued her interest and that’s when she discovered information sciences.

“I thought it was awesome because it was a way to be creative with computer science,” she said. “I had only really heard about information sciences in the library context, but not in a relationship to UX or data analytics, so when I saw that, I thought it was really interesting.”

She took her first information sciences class, INSC 201: Foundations of Information Sciences from Assistant Professor Ben Horne, and was hooked on the major. While her move to Tennessee was unexpected, it’s resulted in a lot of opportunities she wouldn’t have otherwise had. And besides discovering an area of study she loves, she’s also found appeal in the Volunteer spirit at UT, and overall general kindness of the people who live in Knoxville and Appalachia in general.

“There’s definitely that Volunteer spirit, and I can feel it, even on campus, it’s just there and it resonates. We all feel like we’re a part of this big thing and it’s just an energy around and I don’t remember feeling that at Cincinnati,” she said. “I love it, everyone is nice.”

There’s a sense here that people care about each other, and Lerner said she’s especially noticed that community and family are valued. Her interactions with people throughout Appalachia via the Extension work she has done has allowed her to broaden her perspectives and understand the variety of cultures that exist throughout the country. It’s also been fulfilling that the work she is doing has meaning and could positively impact many people and communities.

She chose the Data, Information Management, and Analytics (DIMA) concentration after thoroughly enjoying a statistics class and realizing she has a passion for taking data and turning it into accessible and digestible visuals for people. She made the DIMA her concentration but also declared a minor in statistics to bolster her major.

“You can look at data and you imagine data as a bunch of numbers, which don’t mean anything to a lot of people. You can throw statistics at people and a lot of times people won’t make sense of those and it is really hard to follow. I feel like when you do data analytics, you make sense of it by creating models and visualizations and present it in a way that people can understand,” she said.

She’s been able to put her new knowledge into action with the work she’s done at UTIA, and currently has two publications in the revision process for Choices Magazines, an agricultural economics magazine. The bulk of her work has centered around researching and gathering data regarding the socioeconomic status of people in various counties within the ag extension’s purview, where broadband is currently accessible in those areas, and whether or not people are adopting broadband internet when it is available. She published a report in the UT Extension digital magazine with her research, which could potentially aid in the Extension garnering federal funding to provide broadband internet in areas that are in the most dire need of such services and to understand what obstacles exist that may cause people not to adopt it. It’s been an exciting learning and working opportunity for Lerner.

“It’s the first time I was able to get out and do something. I’ve been holed up at home for a long time but I actually work in the Extension office and we got to talk to people from all over the state because Extension has offices in all of the counties. And we’re trying to figure out what we can do to help them. I got to do work that I could see the effect of and not just be behind my computer and typing things and just sending it off and not knowing what is happening with that,” she said.

While she plans on graduating in spring 2023, Lerner is already thinking about what she will do after she has her degree in hand. A graduate degree is likely in her future at some point, but first she wants to be out in the field conducting data analytics for possibly for finance or finance tech sectors, though she is also looking at jobs where data analytics and UX research overlap.

“The best thing about my major is that it is so interdisciplinary. I don’t really have to pick an industry and that’s one of the most interesting things about it. When I was looking at chemical engineering programs, I felt I was going to be confined to a lab. I like this because I have options; with data analytics, I can do it anywhere in the world and there’s just a million opportunities with it, and a lot of those opportunities are going remote,” she said.