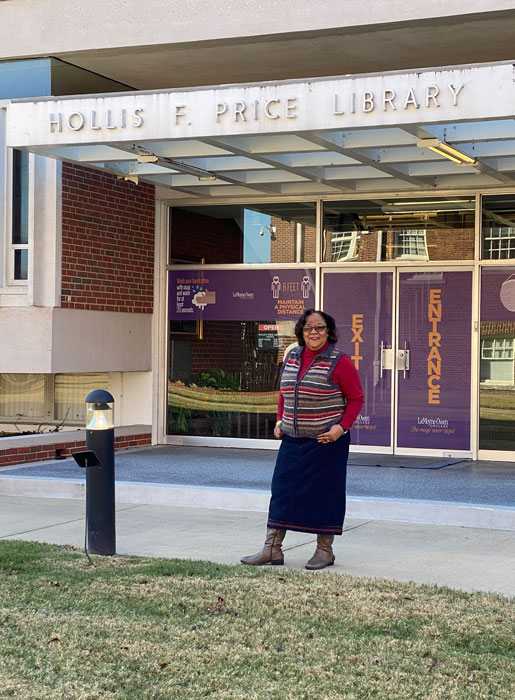 Like any good story, Stacey Smith’s (’14) has a thread of repeated themes; throughout her adult life she would be pulled back to her hometown of Memphis and she would consistently gravitate to libraries. The satisfying ending is that she went full circle and became the director of the library at her undergraduate alma mater, LeMoyne-Owen College, in 2019.

As many information and library science professionals do, Smith fell into library work by proximity. She was getting her master’s in English from the University of Mississippi but was at Oxford while conducting thesis research (which focused on Mary Shelley and “Frankenstein,” reflecting her love of horror), and materials she needed through interlibrary loan were often located at Memphis institutions. So she returned home and started spending her days at the Memphis Public Library to finish her capstone project.

“I was there three days a week and they said, you’re here all the time, you should work here. I had never thought about working in a library,” she said. “I was just watching all these people in the library and it was providing what they needed, they were having a transformative experience, and you could see when they came looking for something and when they got it, they would be so excited. I wanted to be a part of that, so that’s where the journey started.”

That’s all it took to kick off Smith’s library career. She became a library assistant there in Memphis, and when she married and moved to San Diego, she got another library job at National University. When she had been a master’s student, she discovered teaching Freshman English classes and grading papers didn’t suit her — but she very much enjoyed interacting with and helping students. It all came together that she could get the best of all the things she loved by being a librarian.

“I can hold their hands along the way while they do their research but not have to read their papers and grade them,” she said.

After working as a circulation supervisor in San Diego, Smith’s family once again returned home to Memphis, where she found work at the University of Memphis,   as head of circulation. Because the school is a state institution, Smith knew her tuition would be waived if she attended the School of Information Sciences at the University of Tennessee, Knoxville. Not to mention it is a distance education program with classes that fit around her work schedule. And as an extra bonus, two of her colleagues also started the program at the same time, in 2012.

“That made it even better. We collaborated on a lot of our research and projects; we helped each other along the way and we all graduated in 2014,” Smith said.

She particularly enjoyed how her school work became an extension of her own job, and even said it felt like “on-the-job training.” Smith found the synchronous program helpful and the faculty caring and compassionate.

“I could just really tell they were reading our discussions and work, and they were genuinely interested in our input and success,” she said.

She was impressed enough to recommend the program to more than one student who has worked with her at the Hollis F. Price Library (LeMoyne-Owen College). One student, Elisha Jewell, took Smith’s recommendation to apply to the MSIS program and was awarded a scholarship.

Smith initially worked as the manager of Benjamin L. Hooks Central Library, the main branch of the Memphis Public Library system, upon graduation. But she had been keeping her eye on the director position at LeMoyne, which was still held by the same person who had been there when Smith graduated in 1985. So when the job opened up, Smith applied and was thrilled to be awarded the position.

“I remember when I was here, the personable experiences that I received made me feel special. I want to be able to give that same type of experience to students today because I felt so nurtured, important, seen and heard when I was here. I want to give students now that same type of experience, so that when they walk away, they are not just  a great researcher, but a lifelong learner and a library lover,” Smith said.

Once she started at L-OC, Smith immediately began to update the Hollis F. Price library. She removed the old card catalogs and ensured everything was digitized, put in new furniture and flooring, created modern displays and began weeding out the collections in an extensive inventory overhaul. Additionally, she created a small business center, a juvenile section for education students, and a career center.

It’s a small library and Smith has to be creative at times to ensure her staff of five can do everything she envisions, but she says they are a great team that accomplishes a lot. When COVID-19 limited access to the library, they immediately created online workshops, remote chats, virtual instruction, and updated their webpage to be more user friendly.

Most of all, Smith wants to show students how useful the library can be across the curriculum.  She wants to encourage them to start using its services as soon as Possible. She’s working on integrating information literacy, and understanding how to use the library, into the College’s requirements because she knows how much all students can benefit from it. She’s even put up signs around campus telling students to stop Googling and to start using the library—or at least learn how to Google better. “After all, librarians are the original search engines.”

“I’ve always had a passion for libraries and library science and research and instruction. I’m always surprised to see seniors coming through the doors and say it’s their first time here,” she said. “I know a lot of things are online and accessible that way, but I just really feel like it is important for them to be in line rather than online. Once they realize how easy it is and the benefit of having someone help them navigate the process, they start coming back.“