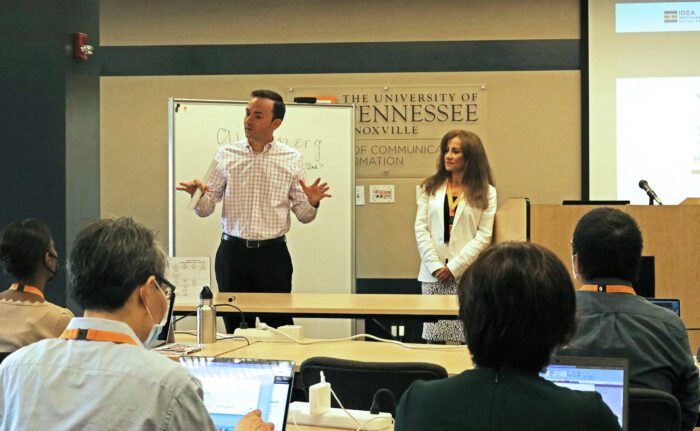 After a lot of hard work and planning, the inaugural IDEA (Innovation, Disruption, Enquiry, Access) Institute on Artificial Intelligence was successfully launched and completed this July at the University of Tennessee, Knoxville.

“It exceeded all our expectations and was the first nationwide event, as far as we know, to train people in aspects of AI in library and information environments. We had different types of positions and organizations, from web developers to data scientists and engineers,” she said.

The Institute was born out of a grant from the Institute of Museum and Library Services, and SIS Professor Dania Bilal is at the helm of the project as principal investigator. The idea of the IDEA Institute is to promote cutting-edge technology and concepts that are, and can be, practically applied within the field of information sciences. Seventeen fellows came from all around the United States to attend, from as far as California to as close to home as UT’s own Hodges Library.

“It was a very competitive process, they had to apply for the Institute and part of the application focused on diversity, equity and inclusion, and what contribution they would make in AI when they go back to their workplace with regard to all of this,” Bilal said.

Attendees were all professionals in the information sciences field, though Bilal noted that, not only did Bilal and the Co-PIs  desire fellows with diverse cultural, ethnic, and racial backgrounds, but they also wanted fellows from a variety of different workplace settings.

Bilal said the week was packed with intensive training and learning experiences, including a session with guest speaker Jason Griffey, who spoke about “Traveling into the Future on Neural Engines,” a screening of the PBS special “Coded Bias,” a networking dinner that included breakout sessions with five experts from UT speaking on AI, and a showcase wherein each fellow presented their plan for incorporating AI into their own workplace.

While this particular week-long learning experience in Knoxville focused on artificial intelligence, Bilal said there is flexibility for the Institute to focus on other technology in the future. That said, the 2022 IDEA Institute at the University of Texas in Austin will also focus on artificial intelligence, and Bilal said a call for applications will be posted on the IDEA Institute on AI website (http://idea.infosci.utk.edu) and via social media.

“ASIS&T may not call it the IDEA institute; it may be an institute on emerging technologies, and every year it’ll focus on new cutting-edge technology. Most library professionals do not go to ASIS&T, so we wanted to provide value for ASIS&T and for people who work in libraries and other information professions to be involved,” she said.

One of the outcomes of the 2021 IDEA Institute is the creation of a new ASIS&T special interest group in Artificial Intelligence , SIG AI; Bilal and the Co-PIs  also submitted a workshop to ASIS&T for its October conference that was accepted and will involve all of the fellows who attended the Institute and others interested in AI applications in information science.

This project was made possible in part by the Institute of Museum and Library Services, IMLS grant number RE-246419-OLS-20.