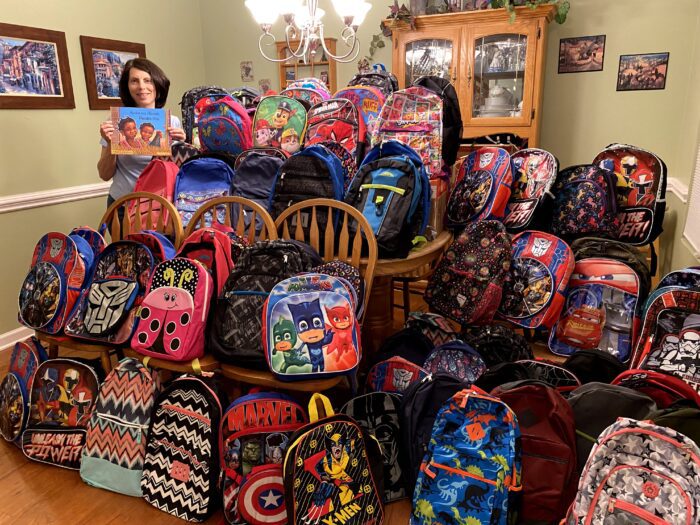 While she was in the MSIS program, Lara Marler (’17) started a passion project to get books into the hands of refugee children in Knoxville, and that project recently came to full fruition in the form of 68 backpacks filled with tools to ready Swahili-speaking children for kindergarten. Each backpack has a picture book in Swahili and related activities and supplies, with a curriculum Marler wrote herself.

This started as a project for one of her MSIS classes that required students to do something for a community organization. At that time there was an ongoing refugee crisis, so Marler chose to reach out to Bridge Refugee Services in Knoxville to see if there was a project that she and her group mates could initiate that would meet a need for the organization. Initially, the idea was to have a storytime backpack, but that evolved over time into a backpack with kindergarten readiness activities that could be given to a family. While the idea initially seemed simple enough, the execution proved to be challenging, she said.

“Finding books that are fun and interesting for children, in Swahili, was tricky,” she said.

Swahili was chosen because it is a language commonly spoken in several African countries, and would benefit a good percentage of the refugee population in Knoxville that needs something like these backpacks.

In addition to acquiring the picture books, a curriculum was needed to help families walk through the activities that accompany the book and provide the building blocks of kindergarten readiness. Marler said there are basic skills that can provide a good foundation for entering school, such as learning colors, learning how to count, how to sort, even how to cut paper. These things may be taken for granted by some, but refugee families who haven’t been living in a stable environment don’t always have the opportunity to teach their children these skills, she said.

“This is an opportunity for those parents to be able to help their children learn. Many of the activities would be fun for older children, and extra supplies were included so the whole family can be involved,” she said.

Marler chose to write the curriculum herself to avoid any copyright issues, which meant she needed to find a good translator to translate the curriculum into Swahili, a language she herself does not speak or write. She eventually did find a translator in Tanzania, through a Facebook connection, and they got to work.

Throughout the project, she leaned on the communities of Knoxville to extend funding and other assistance to acquire all the necessary parts for the backpacks. Garden Montessori School in the Fountain City area held a backpack and scissors drive, while the Christian Academy of Knoxville collected change from a bookfair that went towards buying books. Local congregations of the Church of Jesus Christof Latter-day Saints also contributed supplies. 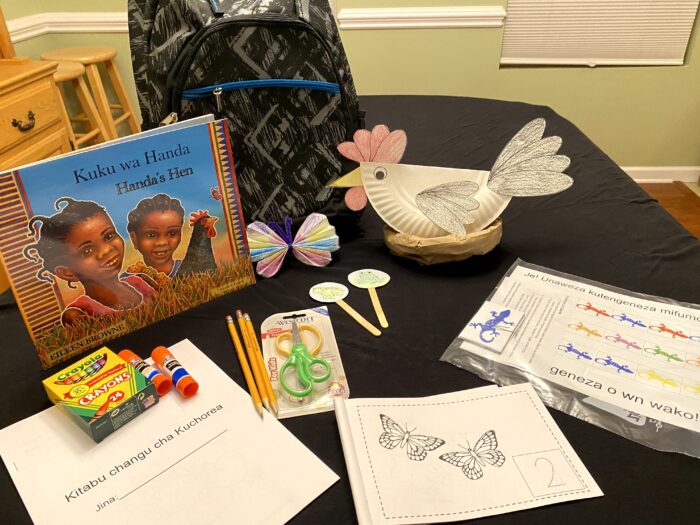 “Handa’s Hen” is one of the books in Swahili put into the kindergarten readiness backpacks Lara Marler made, complete with supplies and curriculum for correlating activities, for Bridge Refugee Services in Knoxville.

Though Marler started this endeavor while getting her MSIS degree, the elementary school librarian job she got right after graduation continued to give her perspective on how to complete it – and also reaffirmed that it would be a valuable tool for refugee children and families.

“I realized the kids who came in and knew how to treat a book, how to color, how to write their name, those kindergarten readiness skills we take for granted, they were so much further ahead than kids who hadn’t learned these skills at home,” she said.

Besides meeting a need Bridge Refugee Services had identified as a priority, this project gave Marler an opportunity to work in children’s literacy again. She was a school librarian for two-and-a-half years before realizing it wasn’t quite the right fit for her, and she began looking for other positions that would suit her skillset. She now curates scientific and technical information for the Office of Scientific and Technical Information in Oak Ridge.

“I have a background in science from a first career, so it’s kind of fun to combine my interest in science with information sciences,” she said.

She was able to get the job through Information International Associates in part due to work she did in a student position at the Oak Ridge National Lab doing publications tracking, which she said gave her broader experience within the information sciences field.

“One of the OSTI missions is to make research such as technical reports and accepted manuscripts and other deliverables from DOE-funded research available to the public, and of course to other researchers. I love it, you could say that I help make scientific and technical information more searchable and retrievable,” she said.