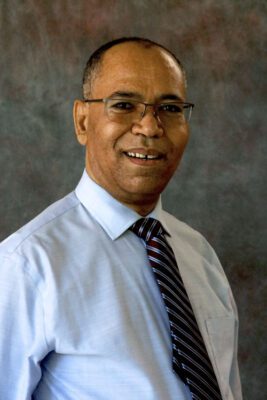 Just as new School of Information Sciences Professor and Director Abebe Rorissa stepped into his role July 1, 2021, it was announced that he was elected to be president of the Association for Information Science and Technology (ASIS&T). Rorissa’s biography and position statement can be viewed here on the ASIS&T site.

He has been heavily involved with the organization for many years and looks forward to working on the initiatives and strategic plan that ASIS&T has outlined for coming years. Rorissa particularly is interested in making justice, equity, diversity, and inclusion a priority in the work the organization does.

“Recruitment and retention of members, especially students and practitioners, from underrepresented regions and communities will be my primary focus. In this effort, the ASIS&T brand and current members, including those who have a wide network of colleagues from diverse regions and communities, will be leveraged,” Rorissa wrote in his position statement.

Rorissa comes to SIS after serving as Associate Dean for Faculty Development and Associate Professor in the College of Emergency Preparedness, Homeland Security and Cybersecurity at State University of New York (SUNY) at Albany. SIS and Chancellor’s Professor Carol Tenopir, who is retiring August 1, stepped in as interim director for the last year after then-director Diane Kelly was named UT Vice Provost for Faculty affairs.

He particularly enjoys service roles, as is evidenced by the recent honor he was given as the 2021 recipient of the Watson Davis Award for Service by ASIS&T. The award recognizes someone who “has shown continuous dedicated leadership in and service to ASIS&T and made substantial and lasting contributions to ASIS&T governance, chapters, SIGs, committees, and publications.”

He has held many leadership positions in the Association for Information Science & Technology (ASIS&T), the major international professional organization in information sciences, including chair of the Nominations Committee, member of the Strategic Planning Task Force, chair of the Awards & Honors Committee, and an elected member on the ASIS&T Board of Directors. He is also the advisor for the ASIS&T Africa chapter.

Rorissa is also a leader with respect to diversity and inclusion. At SUNY Albany, he led efforts to recruit and retain a diverse faculty, initiated a strategic planning effort for justice, equity, diversity, and inclusion, and developed academic initiatives to attract and mentor a diverse student body. He is a multilingual person of color with wide international and national experience working with and mentoring students of diverse backgrounds. He retains academic connections to the University of Namibia, and to Jimma University and Addis Ababa University both in Ethiopia, in addition to being well known in the North American Information Sciences community as a scholar and leader.