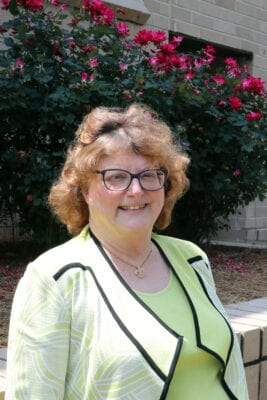 For Nancy Pack (’81), the last three decades of being a librarian has really been about one thing: the people. Whether it was her cohort at the School of Information Sciences, many of whom she’s stayed in touch with throughout the years, or the varied patrons she has served, it has been the people who have made it a career she loves.

Getting a Good Start

Pack became interested in librarianship when she was a kindergarten teacher and visited her school’s library frequently to aid in creating units and for other resources. The idea to be a library media specialist appealed to her – she liked the idea of promoting early literacy and having an opportunity to aid so many children’s education. After a couple of years teaching, she returned to the University of Arkansas to become a school library media specialist.

As a lifelong Southerner, Pack was reluctant to travel too far from the region she knew, but decided that the nine hours distance between home and Knoxville, Tennessee, was worth it for the program at the University of Tennessee. There, she said she learned all of the basic building blocks to take with her wherever she went, and in whatever type of library she desired – and Pack took full advantage of this. She’s worked in libraries in six states, including: public libraries, a special library at an Airforce base; libraries for the blind and disadvantaged; and a state library.

She got a jump start on library administration by becoming library director of William F. Laman Public Library in North Little Rock, Arkansas, right after she graduated. Though she initially planned to work at a school, all the school library positions had been filled, so she began looking in public libraries and became the first librarian at Laman to have an ALA-accredited degree.

“I pretty much had a learning curve, not being a director or librarian before, but I had a lot of good mentors who helped me learn the ropes. I do think a lot of the coursework at UT prepared me  for being a director, knowing collection development and the cutting edge things,” she said.

When Pack thinks about her time at SIS, she lists off various names that many alumni would know such as Gary Purcell, Ruth Wilson, Ann Prentiss, Bill Robinson, Glenn Estes, and many more. She said all of the professors created assignments that challenged her to think and to expand her perspectives.

Besides the professors, her fellow students were a constant source of companionship and support for Pack during that time.

“I would like to acknowledge the classmates I had because without them, I probably wouldn’t have survived. . “The class of 1980-1982 was remarkable, and I say that my degree was earned by all of us working together and sharing our knowledge and being able to network with them.”

I left my family in Arkansas and went to Tennessee and didn’t know anyone there. We were all broke, didn’t have money, they would say, ‘Come on over to my house and bring whatever you want for food,’ and they’d roll up the carpet and we’d have a little party.”

It’s too much to go through every single position Pack has ever held, she says – but she does like recalling the highlights of her experiences over the years. For example, working with blind library patrons in Florida and Maryland was particularly interesting and rewarding. In Florida, she was a consultant for the Library for the Blind and Physically Handicapped and there she assisted with a documentary the library made about older people who had been blind for either all or the majority of their lives.

“It documented their trials and tribulations, and we found that some social justice issues went on with the visually impaired people of color. There was one woman who encountered police who told her she was on the wrong side of town, and she told them that she wouldn’t know, she couldn’t see.” “We also documented how visually impaired people raised sighted children,– I watched how they cared for them, how they put jingle bells on their children’s shoes so they could hear where they were.”

A completely different experience was her time as a contracted librarian working at Moody Airforce Base in Georgia. There, she served what would be a typical public library population of adults and children, but she also maintained a collection of military history because the library was a feeder into officer training at Air University.

Her time at public libraries, including at the Chattanooga Public  and Tuscaloosa Public Library, allowed her to create programs for people of all ages, backgrounds and income levels. She particularly enjoyed creating programing for the aging population. She also valued the opportunities she has had to oversee renovations and the building of new library branches. Her career has been so varied, and even after 30 years in the game, she is always up for a new challenge.

“I would say a lot of things I’ve been involved in was a result of  being in the right place at the right time– serendipitous. I’ve had all the areas of experience that a librarian goes through in a career, I’ve been very fortunate,” she said.

The latest challenge in her career, however, was not one Pack intentionally took on but one that everyone faced starting in 2020: the COVID-19 pandemic. She is currently the executive director of the Alabama Public Library Service, which oversees all of the public libraries in the state, as well as the Alabama Library for the Blind and Physically Handicapped.

Her approach to the sudden changes necessitated by the pandemic is simple and one she said she learned during her master’s program: information has been the same, it just gets repackaged in different formats. For example, providing virtual story time on YouTube or Facebook isn’t all that different from when librarians recorded stories that could be listened to over the telephone in the 1990s, Pack said.

“Everything out there is just a new twist to what we’ve been doing, the basic elements are still there,” she said. “It always goes back to the basic building blocks and applying them .”

One of those serendipitous moments in her career happened right before the pandemic, when she worked with the Alabama Supercomputer Authority and the state legislature to get 100 megabytes of internet service and WIFI into 220 public libraries across the state. This allowed patrons to go sit in library parking lots and utilize the WIFI without having to be near other people. Many of the state’s libraries serve under 50,000 people and are in areas where broadband is not available, so providing reliable internet was a boon to those residents.

As she has in other positions, Pack has overseen renovations at the large state library building. Renovations were done to remediate water and mold issues, but she also began looking at how the space could better serve patrons following pandemic safety measures.

“Nowadays it has totally changed, you’re looking at social distancing and what fabrics may harbor germs. Our last renovation project was completed in January redoing the front entrance and recarpeting.  When we began rearranging furniture, it was on my mine to put it back  with social distancing in place,” she said.

Outside of pandemic-related issues, Pack is also excited about new technologies to assist patrons of the Library for the Blind and Physically Handicapped, including new braille e-readers. Alabama is one of seven states selected to pilot the devices, and she’s hopeful it will be we successful and the Library of Congress will start providing the e-readers for those who read braille.

Pack knows she’ll see even more new technologies emerge during her career, and that libraries will always be at the forefront of finding ways to ensure those technologies benefit the most vulnerable, those people who are most in need of additional resources. It’s the reason she went to library school in the first place: to touch people’s lives and to make a difference; and like information itself, her passions and motivations may be packaged in different formats, but the purpose remains the same.

“The highlight of my career are the people I’ve worked with and provided services to,” she said.