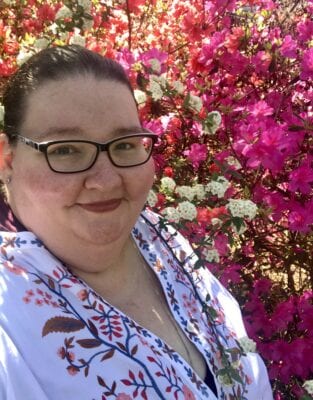 Celise Reech-Harper (’12) moved into her first library director position in January 2020 – so you can imagine that flexibility and innovation quickly became a necessity as she navigated overseeing one main library and nine branches of the Rapides Parish Library in Central Louisiana through a pandemic. But it was a challenge she handled deftly and with aplomb, which is why she is the recipient of the 2021 SIS Alumni Innovator Award.

As good leaders do, Reech-Harper deflects much of the praise for how the Rapides Parish Library changed services and implemented new ideas during the COVID-19 pandemic, preferring to give credit to those around her. She uses “we” and not “I” when talking about the innovative programming and technology implementation the library undertook this last year. She said being a first-time director actually allowed her the space to make mistakes and seek out more guidance than perhaps a more seasoned director would have been inclined, and in the end, this led to better outcomes.

“It was a very difficult year but also a time for us to innovate and make this organization even better. Our State Library and the Louisiana Library Association as well as other public libraries provided support, ideas, and feedback. We’ve gained a lot of partnerships, we’ve learned a lot about giving each other grace to pioneer initiatives and also relying on each other,” she said.

Reech-Harper said she was flabbergasted to have been nominated and chosen for the award because so many library directors and other information science professionals responded similarly to the pandemic, taking what was a tragedy and finding ways to positively impact their communities. In fact, connecting with other library directors across the state was integral in her endeavors to serve her parish and patrons.

“If I had not had the positive relationships with the State Library of Louisiana and other library directors,  I’m certain we would not have been able to accomplish what we did. They gave me ideas I happily stole, and they gave me support,” she said. “Sometimes, it was just a matter of hearing and knowing other people were going through similar situations and that we were not alone; everyone was overcoming these obstacles in their own way.”

Here’s a few of the ways that the Rapides Parish Library changed, improved, or added to their services under Reech-Harper’s purview:

It’s been a tough year; Reech-Harper does not deny that. She had a family member get very sick with COVID-19 (who is now recovered) and knows quite well the emotional toll the pandemic can take. Her community also withstood two historic hurricanes, furthering the need for cohesive, immediate response from their library, a response Reech-Harper noted, which included her spouse removing branches for safe access to library branches and her team assisting her prior library in mitigating damage to its collections. Nonetheless, she did her best throughout that time to see how she could help others and find silver linings to an extremely difficult situation. Those silver linings often took the shape of individuals going above and beyond for the betterment of their neighbors.

Besides adding new programming and technology, Reech-Harper also made sure the Library partnered with other community organizations to ensure that both library personnel and patrons had access to resources beyond the library. Staff members from the Rapides Parish Library participated in the PPE for Cenla Project which provided hundreds of 3D printed (using the Library and local schools’ printers) protective gear for local healthcare workers. The Library provided not only their physical resources but also the efforts of Reech-Harper and other staff members who spent their quarantine time on a long distance production line. In total, the Library staff assisted with piecing approximately 500 masks and shields.

Their partnership efforts extended far beyond the immediate physical needs of the community; they included bringing in Louisiana Spirit Crisis Counseling Support through the Central Louisiana Human Services District to guide library staff in relaxation techniques and to also have one-on-one meetings with employees. This helped them navigate any additional assistance they may need such as finding mental health providers or support groups.

The LSCCS is now partnering with the Library as a resource for the general public, assisting with applications for housing, applications for food assistance, and any other kind of social services support residents may need.

“We can help with education or some items they may immediately need, but if they’re in need of food or completion of forms for housing or long-term mental health help, we’re not the best people to do that; part of our mission as the Library is connecting people with the best resources and we want to get them the best results we can,” she said.

Another way Reech-Harper supported library employees was by hosting a weekly virtual meeting – they call them RPL Team Talks – which continue to be optional but well-attended. These are a chance for everyone to talk about what is going on at their branches and departments, ideas that they have, and to share information. It’s also a way to commiserate about any challenges or difficulties and to seek solutions as a whole.

Reech-Harper was almost done with a master’s degree in English literature when she decided to work for a summer as a youth services coordinator at the Beauregard Parish Library – little did she know then that she would end up being there for over 11 years and earning two master’s degrees, instead of just the one. During her first months at BPL, a childhood love of discovery and reading, nurtured by her mother, manifested itself in an undeniable pull to public library service. Once she finished her English degree, she began looking for a library and information sciences program where she could earn another master’s degree – the University of Tennessee, Knoxville, made sense to her because of its American Libraries Association accreditation and its established distance education program. She couldn’t move due to her own job and her husband’s profession, so being able to stay put was a must.

“Having a program that was synchronous and allowed me to engage with real people was crucial to my success. It made me feel a sense of community even though we were spread out. In fact, I have several friends I stay in contact with who I met through the program. It was a really great experience to feel that sense of community even though we were so far away,” she said.

She particularly enjoyed the help of her advisor, former SIS Professor Bharat Mehra, who did a lot of work in the area of rural libraries. While she had already been working in a rural public library, Mehra gave her the framework and ability, as well as the encouragement, to understand her library’s needs and how to make positive change for the community she was serving.

She continued working at the Beauregard Parish Library and was eventually promoted to become Associate Director before moving into her current position in 2020. But her library endeavors weren’t isolated to where she worked – she also has been involved with the Louisiana Library Association for about nine years.

“The people I have worked with there have been an incredible source of support, and I love the organization,” she said.

In fact, she was the Chair of the LLA 2020 conference, and it saddened her to be one of the people making the hard decision to call off that conference. She and other executive board members of LLA rallied that year to provide some virtual events, and this year, the entire conference was offered virtually.

Overall, the last year has brought so much change, some of it heartbreakingly bad but a lot of it good. The responses to it showcase the resiliency of people, the flexibility of systems, and the innovation of many, including Reech-Harper.

“I like to focus on the opportunities it provided, because it did encourage people to let go of some of the old and embrace new services, and it also broke down some of the barriers to access. For that and the wonderful team I joined, I am eternally grateful,” she said.