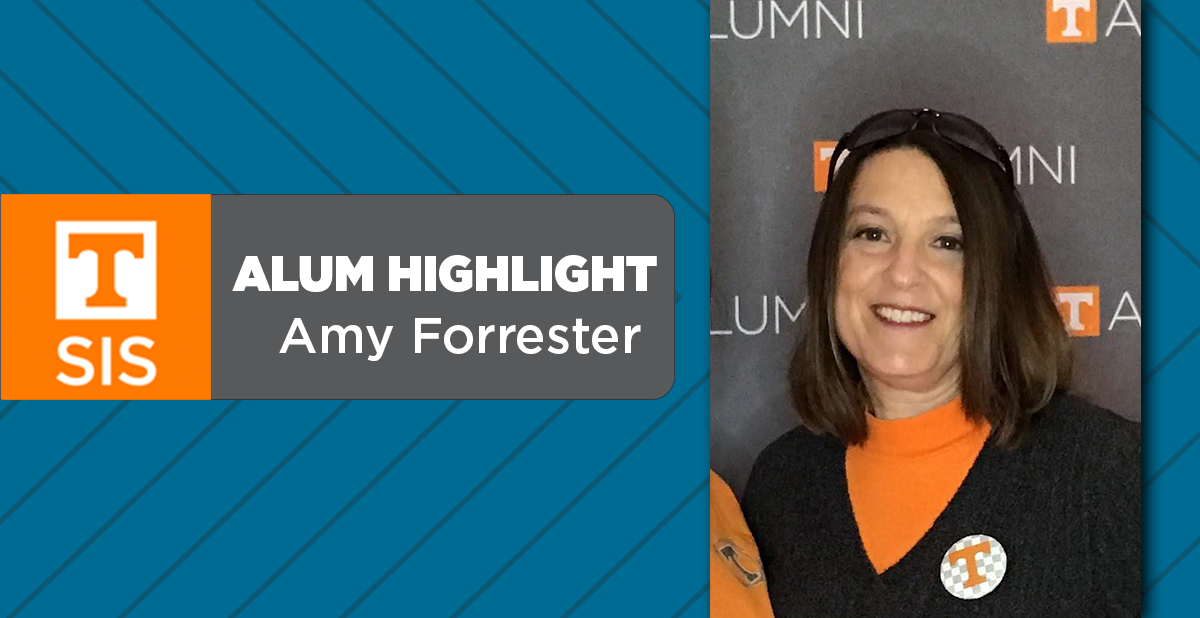 What do marine biology, sustainability, marine policy and management, data repositories, commercial information management, project management, information sciences, and publishing all have in common? These are all fields MSIS alumna Amy Forrester (’16) has worked in throughout her career. It’s fitting that she stepped into the role of assistant director of the Center of Information and Communication (CICs) at the College of Communication and Information (CCI) this past year, where she’s found the perfect fit for her varied experience and expertise.

“I have content expertise to talk about all the pieces to be involved, so it’s not just being a project manager, but it’s also being able to contribute. It’s cool that I get to do a variety of things that constantly flex my information sciences side while still leveraging my scientific side,” Forrester said.

At CICS, she works with external partners to increase funding and research opportunities for CCI and she also oversees workforce development projects that supports keeping University of Tennessee talent  in the East Tennessee area. While that’s not a long description of her position, embodied within those few words is a multitude of jobs that make each one of Forrester’s days different from the last.

Not only does the challenging work make her job interesting and fun, but the work itself is impactful. While Forrester was getting her graduate degree in information sciences and asked her about her dream job, the response wasn’t a specific position as much as a specific idea: to do good, impactful work.

That’s often been the driver for Forrester’s career, starting when she graduated from Boston University with an undergraduate degree in marine science and had an interest in how people were affecting the marine environment. She managed a lab at the University of Miami Rosenstiel School of Marine and Atmosphericand researched the effects of nutrification on the coral reefs in the Florida Keys. She eventually earned her master’s degree in marine affairs and policy, which is a cross-disciplinary approach to examining the intersection of marine ecosystems and society.

With her background in environmental science, Forrester soon found herself working in the commercial information industry at Cambridge Scientific Abstracts, a company that would later merge with ProQuest. There, she created science-focused online products and databases in support of academic research. It was the mid-1990s and the Internet was bursting onto the scene and the company was quickly adapting to this new vehicle for information delivery. Forrester helped CSA put together a web resources group and started exploring ways to expand the value of online information. The potential of the Internet to massively increase both the production and sharing of information was clear. Forrester and CSA started working with the United States Geological Survey to help support its new online resource presence.

“We were supporting issues of biocomplexity, what we now call grand challenges,  and we were trying to understand how connecting data and information  between disciplines could solve problems – we were playing right in the explosion of information that was being be put out there…it was just a feeding ground of ideas and possibilities and the wonderful realization that this would change everything ,” she said.

After CSA and ProQuest merged, Forrester stayed on and began working in the realm of machine indexing as the company recognized a need to crunch larger amounts of data at even faster speeds. She supported both the traditional ProQuest databases it provided but also kept working in web resources. Online publishing began to emerge and Forrester started working in open access publishing and helped launch and manage an ejournal called “Sustainability: Science Practice, and Policy” in collaboration with USGS.

From there, Forrester just kept jumping from one cutting-edge project to the next, sometimes managing several at once. She dove into interactive publishing and worked with the National Institute of Health to transform a static online article into an interactive experience that could manipulate data, change graph variables, and link to references. She became the market development manager of the Scitech databases division and continued to explore interactive bibliographic tools and databases.

“I was doing innovative research and development all that time focused in the science and environmental side. And then I read an email that said the Laura Bush foundation was giving all this money to library and information sciences schools,” Forrester said.

Librarians comprised the bulk of her customers and she had heard the refrain more than once from those associates that if she had her library degree, she could have her pick of jobs. But there was something about these foundation grants that piqued her interest, and Forrester decided to reach out to a couple of the schools and ask them what they were doing with the money.

When she contacted the School of Information Sciences at the University of Tennessee, they explained the grant money was being used to create a cohort of MSIS students called, Team Science and after some conversation, believed  that Forrester would be perfect for a program.

“It was the precursor to the IMLS CALL program going on now, it focused on scientific data curation with a special emphasis on collaborative efforts to address scientific challenges using the expertise of both scientists and information professionals together,” Forrester explained.

She really wasn’t looking to go back to school, but information sciences had her interested enough to do due diligence and seriously check out the UT program and opportunity. UT had her hooked and she made the decision to sell her house in the Maryland suburbs and move to Knoxville into an apartment complex where mostly undergraduate students resided. “I was at the perfect point in my life to make a change…and the program was phenomenal. I had a blast,” she said.

Forrester entered into grad school at the same time her daughter was taking her undergraduate classes, and the next couple of years were rife with jokes between the two women about the mother going out and partying and the daughter dutifully studying. Of course, in reality, Forrester may have made some great social connections (even with being the oldest on-campus SIS student of her cohort by a couple of decades), but she was also working hard. She completed an internship at Y-12 National Security Complex in Oak Ridge where she helped physicists move into using electronic lab notebooks, had multiple articles published, took a study abroad class to London and a Team Science trip New Mexico, and even completed a practicum at Hodges Library because, “I felt like I would be a poser if I graduated without ever having sat behind the desk.”

When she graduated, Forrester was hired by CICS to run the IMLS-funded User Assessment and Experience cohort in SIS. When that ended, she became the member note coordinator for DataOne, which is a global federation of scientific data repositories focused on earth and environmental Science. and when that ended, she jumped into the IMLS funded CALL program as a project manager before becoming the interim assistant director of CICS when the former assistant director, Jesse Cragwall was called to military duty. When Cragwall took a job elsewhere, Forrester was hired into her current position.

“This is the ultimate job in really bringing everything together by supporting and managing the direction of CICS. Really I can tap into a million different things, along with smoothing out internal processes, and I get a lot of support from CCI Associate Dean of Research & CICS Director, Suzie Allard, who supports the team in doing what we do best,” Forrester said.

Echoing what she has always done in her career journey, she hasn’t stopped there. She was just awarded the Tenopir-King Excellence in Research Award for 2021, which recognizes a CICS employee for high-quality research. And, this spring, Forrester took on yet another title by teaching a new undergraduate SIS course in digital and data curation.

Forrester’s joy and excitement is palpable when she talks about her job at CICS and the various opportunities it provides, and she said it’s true, it’s a dream job.

“I do want to have an impact, I never want to phone it in. If I’m doing that, then I don’t want to be there. What I want is to have a job that I want to go to every day and has meaning, that counts, and makes everything around me better,” she said.