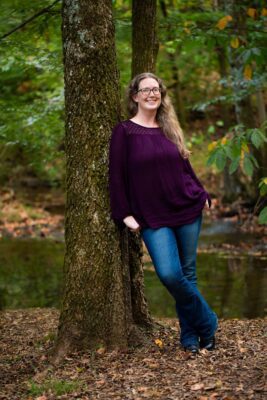 Even the most skilled and advanced researchers in the world need to be able to access other information to support their work. So, when researchers at Oak Ridge National Lab need a journal article or technical manuscript, they know where to go: the ORNL library.

The library was established in 1943, with a history dating back to around the same time as the inception of the Manhattan Project, said Anna Galyon (MSIS ’09), the library’s manager and a School of Information Sciences alumna.

“I think I work in one of the coolest places in the world. The lab does cutting edge science that really helps change the way the country does things – energy and environmental work, national security, neutron work – all the different things that ORNL is good at makes it a really cool place,” Galyon said. “And I love special libraries because I get to work with people who are really passionate about what they do.”

Libraries were always a significant part of her life as she spent a lot of time at the public library that was half a block away from where she lived as a child. But, she went to college to be a psychologist and had finished her master’s degree in psychology when she changed course. This redirection was a confluence of a lack of psychology job openings, and the fact that she was working in the library at Middle Tennessee State University.

“I was frustrated with my psychology job interviews and I thought, man, I wish I could just be a librarian, this seems way cooler. And my manager said, ‘Well, you can be a librarian!’”

Galyon said she only wanted to go to school to be a librarian if she could be back in Knoxville, her hometown – and her manager at the library chimed in again and told her that the University of Tennessee, Knoxville, did indeed have such a program. So, she came back home and started getting her MSIS degree, and she started looking right away for assistantships in the field, and landed one at the McClung Museum of Natural History.

“Working in a museum was really cool even though I knew I didn’t want to be in archives. I got to handle artifacts, and that was neat,” she said.

Galyon said she undertook as many jobs, internships, and practicums as she could handle during her time at SIS in order to gain experience. She did an internship at Pellissippi State Community College’s library in the reference area, and also worked at Hodges Library’s reference desk.

“That’s always my advice to students, take as many of the opportunities as you can, that’s how you’ll get to know people and find out what you like. And I think SIS is really good at providing those opportunities,” she said.

Upon graduating in 2009, Galyon was struggling to find a job that suited the career path she wanted to take when she saw an advertisement for a graduate student job at the ORNL library. She wrote to the library manager at the time, Bob Conrad (MSIS ’83) and an emeritus member of CCI’s Board of Visitors), and asked if she could apply for the position even though she had just graduated. He said that she could up until a year after graduation. She applied and got the position, which is how she got her foot in the door of the lab’s library, and she’s been there ever since.

After working in the part-time student position, a full-time position opened up and she became a reference librarian. Then, she became group leader for technical services, and finally, she stepped into Bob Conrad’s position as manager when he retired in January of 2018.

“I wasn’t sure about being a manager at first, but it’s grown on me, and I have the best staff. I really couldn’t ask for a better team.  And I have managers that support the library. I think there was a fear early on when I started that some things at the library might get cut, but I have people who love the library and see value in what we do,” she said.

Besides serving the 6,000 or so researchers throughout all areas of ORNL, the library also does a lot of publication analysis to help people see the impact of the research they’re creating; basically Galyon said the librarians “shepherd researchers through the entire publication lifecycle.” The library also provides technical standards, and works with some restricted types of data not available to the general public, such as technical reports containing sensitive information.

Even during the COVID-19 pandemic, demand for library services has continued despite the fact that a lot of ORNL employees are working from home and in-person staffing at the library has been reduced. All of the library’s current journal and database subscriptions are electronic, so the library didn’t face as much disruption in that regard, but Galyon has spent a lot of time during the pandemic digitizing older technical reports that were not in electronic form, and getting them ready for users.  The library houses more than 1 million such historical reports that are not digitized due to lack of staffing and time or security concerns. These reports are papers that weren’t quite ready to be a journal article, but still contain lots of useful information.

A Bridge to SIS

While keeping up with the regular day-to-day work at the library, Galyon has also continued the tradition of having SIS students working at the library and has two or three there every semester. It’s an opportunity for the students to gain skills in areas such as circulation, reference, and bibliographic analysis, and provides  the library with a chance to gain from other skills the students have learned in school, such as user experience design, she said. It’s a mutually beneficial relationship that she’s happy to foster, and that helps ORNL maintain the same bridge between it and SIS that helped launch her current career.

She’s also quick to point out that the library isn’t the only path to ORNL for information sciences professionals, as there’s a need for data managers, science communicators, UX designers, and other such positions. The lab values those with information sciences backgrounds, and understands the role those individuals can fill.

“If you can offer to translate between technical people and non-technical people, that is a useful skill. A lot of times, people are passionate about what they do but they cannot translate it to lay people,” Galyon said.