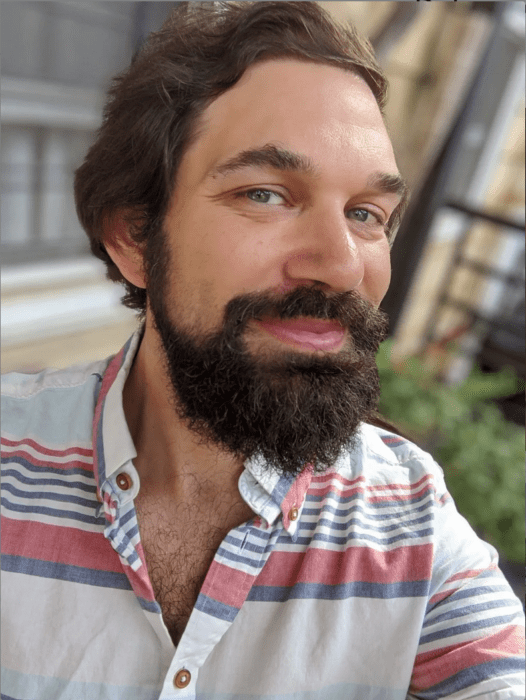 What do you teach at SIS?

INSC 305 – Internet & Society. It’s sort of a survey course of how information science underlies a pretty broad range of structures and social situations within society and trying to make tangible a lot of stuff that can be more theoretical when viewed in greater context.

How has your experience as a lecturer at SIS been?

This is my first semester with SIS and it’s been really great; it’s a good group of students, and obviously this is quite a semester to have as a first semester. I’ve been really impressed with the way that they have been engaging with the material and with each other, and really finding ways to connect with the stuff and everything that is going in the world.

How did you become an SIS lecturer?

For the last three years, I’ve been doing media analytics and audience analysis on a freelance basis, and also doing adjuncting. I reached out to the University of Tennessee because I was talking with another former professor who was on my committee, Jeff Pomerantz, who has been a lecturer for SIS, and he mentioned that it might be a good fit. So I reached out to [SIS Professor] Diane Kelly and she wrote me back immediately and said she was just looking for how she was going to staff up for some of these courses for the undergraduate program.

What do you think about the new SIS undergraduate major?

It’s very exciting and it’s good to see that something that – even when I was in graduate school the study of this particular material was pretty new – there is such broad interest in it even at an undergraduate level.

I think it’s also a tremendous opportunity from an educational perspective as these new jobs start to grow, but are still kind of protean, in what the expected background is. There can be a real leadership role in trying to set an agenda in having a broader background than one that is just narrowly focused on technical skills, but integrates a broader understanding of human factors into all of the job titles in information science, UI, UX, research roles and all that.

What is your background in information sciences?

I did my PhD at University of North Carolina (UNC) School of Information and Library Science, and [SIS Professor] Diane Kelly was a prof there while I was there, and [SIS Assistant Professor] Carolyn Hank was just a year ahead of me in that cohort and I knew both of them well during my time there, and that’s how Tennessee got on my radar as I got into adjuncting in the last few years.

Right after I finished my degree I started working in media analytics. I live in Brooklyn and have been working the last almost 10 years in media analytics – first at New York Public Radio and then at New York Magazine, and then Panoply, which is the Slate Magazine podcast network company. Digital analytics and a lot of that link up pretty directly with a lot of stuff I studied, which is how technology has changed and how we relate to each other.

How did you get into information sciences?

I studied politics in undergrad and actually worked in politics right after that in the 2004 cycle. Then I ended up back in DC, where I grew up, and working in NGOs. In all those capacities, it was very early days in online organizing, and the 2004 campaign was the first real campaign cycle that used the internet as a platform and vector of organizing. I worked on Howard Dean’s campaign and took a lot of those lessons with me into my next several jobs. I realized I needed to get out of DC and was looking around and had this sense that it was going to be important to have a real structural understanding of how these issues worked, and this was something that was going to be increasingly useful to know and increasingly hold sway over our society and economy.

I was looking around at different fields where I could study these issues;  I could get a degree in politics, in sociology, but information and library sciences quickly became clear as the right fit for me. Both my father’s parents had their MLS degrees from Columbia, and there’s this family history of librarianship and working in the book business, so I definitely had something of an affinity for that. And just looking at the theoretical approach and the idea of looking at information problems as fundamentally human problems, and not necessarily technical problems, seemed the right fit for me. I’m very lucky and glad that’s the path that I went down.

What is media and audience analytics?

I look at how people are engaging with the content that they publish and that can take the form of looking at web traffic, social media engagement, podcast downloads, length of engagement, and where the audiences are coming from. Then I do audience research on top of that, which is asking people more directly what they’re getting out of it, who they are demographically, to really get a sense of how the content that’s being produced by a given institution is landing with an audience and what the value is and how that informs their business structure or plans.

In the case of New York Public Radio…so of course their model is that listener membership and support is the biggest source of their funding. So what matters to them isn’t necessarily what stories do the absolute best traffic – they’re proud of the work they do to get stories out in the world – but the ability to produce those stories and what is connecting specifically with their most loyal listener base, what is keeping them engaged, what do they feel are the most important things to be covered. So it may be the case that there are pieces of content or shows that, in the grand scheme things, are relatively small audiences but are felt to be extremely important to a certain swath of that membership and therefore that is important for the continued operations of that station.

In the context of commercial publishing, the dynamics are much closer to that than one might think, especially with the collapse of the current advertisings models. Revenue is driven by a relatively small number of site visitors, whether in some cases those are the same people who subscribe if it’s a subscription based magazine, or a digital native publication, or if they’re deriving a lot of revenue from advertising, it’s typically a relatively small part of their readership that’s coming back on a daily basis and providing a disproportionate amount of clicks.

There’s a broader perception out in the media that publications are chasing clicks – clicks never really made a lot of the money and it is very rare that you could actually build strategy around that stuff. It’s always been the case, and never more so than now, that a very core readership is the most important in sustaining that publication in whatever kind of economic relationship that they’re in. This is a lesson I try to communicate to any client I work with and I try to look at their approach to audience engagement rather holistically and communicatively.