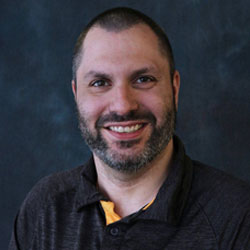 Dan Greene’s (’03) current life is immersed in information sciences: he’s an alum of SIS, he is the SIS technology coordinator, and he’s also an SIS lecturer. But information sciences wasn’t even on his radar when he was an undergraduate at East Tennessee State University. There, he switched majors so many times he almost lost count before he finally did graduate with a degree in history. But there were always two other fields that kept pulling at him throughout the years: computer science and librarianship.

In fact, it all started at his high school library one day when a librarian poked her head out and asked Greene and a few other students if any of them knew anything about websites. It was just around that time when everyone was starting to realize that their organization needed a website, and the library had been put in charge of making the school website. Greene, who at that time was a senior and didn’t know much more than a general idea of what HTML was, volunteered.

“My friends basically didn’t see me for about three weeks after that because every day I was in the library doing my high school’s website. I’d always been interested in IT stuff, but doing the website was completely accidental,” he said.

He learned everything he needed to know in order to build his school’s website, and from there he was hooked. In fact, he had started out in the computer science program at ETSU, but the degree program focused on calculus and advanced mathematics rather than web-based computer science. Though he was working at a computer store in Johnson City at the time, Greene knew that program wasn’t the right fit for him and that’s when he began searching for another major.

Upon graduation, Greene went into a community college program thinking he would get an associate’s degree in computer science, something more web-based. But that also wasn’t exactly the right fit.

“It felt like a continuation of high school and a couple of the professors asked me why I was there, that I already knew most of the topics, and I said, well, I want to get the degree as proof that I know,” he said.

Fate would have it that the computer shop would close down, and Greene began wondering if community college was the right choice after all. He had more than one librarian in his life, and both suggested he check out the library program at the University of Tennessee, Knoxville. So he did, and he entered the class of 2001 to get his master’s degree in information sciences. He graduated from the program in spring 2003 and entered the school’s doctoral program that fall. Once again, his life was thrown for another loop when he had a serious car accident that October in which he suffered injuries that derailed his plans for two years.

When he came back to the program in 2005 and was working as a graduate teaching assistant, the then-director of SIS was leaving to go to the University of Missouri and encouraged Greene to follow him there and enter its PhD program. Greene liked the director, and the school paid their GTAs a bit more, so he figured why not. Turns out that Missouri was not to either Greene or the former director’s taste, and both soon left  for other opportunities. Greene returned to Knoxville in August 2006 and got a job at UT’s Hodges Library as a web designer for what was then the library outreach department.

After that, Greene stayed at Hodges in different IT roles until January 2018, when he saw the position open up at SIS. It was a pleasant return to his roots, and it also was a role that gives him a lot of autonomy and flexibility. He is the technology coordinator for SIS, and he does web server management for both SIS and the College of Communication and Information. As SIS technology coordinator he anticipates, plans for, and supports hardware, software, and IT systems for all SIS faculty and staff, and assists faculty, staff, students, and lecturers with online class support.

“The technology coordinator job came open at just the right time and it was a good place to go and it remains to be a good place, and I’m quite happy here,” he said.

To top it off, Greene started teaching as a lecturer a few semesters ago, with this being his third semester. The class he currently teaches is, of course, INSC 514: Information Technology Foundations. It’s one of the reasons why he took the job, because it was going to allow him to also teach, something he’s always enjoyed doing.

“I like it when the lightbulb goes off for students after I’ve gone through something for a few weeks and then someone finally says, ‘Oh, now I get it!’ and then they’re fine and realize it wasn’t really that hard, it’s just being able to learn the steps and do what needs to be done,” Greene said.

Despite teaching an entire semester on IT, and working a full-time job in IT, Greene said the job really culminates in one truism: “Always turn it off and back on first.”