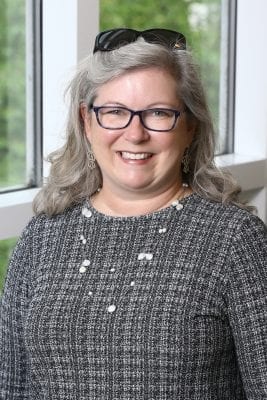 For every single product you search for while shopping online, there are layers of data that led you to it. Granular data that has been dug up, categorized, standardized, and recorded by teams of people – people like Laura Creekmore (’17).

Creekmore is vice president of content operations at Chicago-based Syndigo, and leads a team that takes any product a client wants to sell and captures all of the information about that product, including taxonomy and category attributes. The sudden bump in online shopping caused by COVID-19 has only increased her team’s workload, and revealed the relevance and impact of the work they do.

“Every company wants to have their products accurately represented online. There’s a lot of research out there that shows that products that are better described, have better images, more accurate and detailed information online, sell better,” Creekmore said.

Once her team does its job, the companies that access the product content can use the information in many different ways, such as optimizing search results or enhancing their customers’ shopping experience. Creekmore and her team are very behind-the-scenes people who help keep the e-commerce experience moving smoothly.

While taxonomy hasn’t always been Creekmore’s area of expertise, information and structuring it has long been her arena. She was ahead of the game in the mid-90s, when some people began realizing the endless possibilities of the internet. She worked in communications at a publishing company shortly after graduating from Vanderbilt University with her undergraduate degree in European history.

“I was just lucky because the guy who owned the publishing company really thought the internet was going to turn into something. I said, ‘Hey, I’d love to do more than just work on newsletters and magazines,’ so we learned how to build websites for our clients in the mid-1990s,” she said.

Creekmore learned how to code and she also began observing how people interacted with content in an online environment versus a physical one. It wasn’t long before she was in the thick of information architecture as it was developing as a digital discipline in the late ‘90s, and by 2008 she was a consultant who helped companies organize and structure information on their websites. She became proficient with content management systems (CMS) and even how to write and create content that has an inherent structure underneath it to be used for other purposes. With her experience, she had a considerable amount of knowledge and application skills in information architecture long before she entertained the idea of getting her master’s in information sciences.

“I ended up coming to UT because of one conversation I had with a customer. I had literally sat with a data administrator for six months building a content management system, and one day he turned to me and said, ‘You really know what you’re talking about,’” she said, going on to explain that the data administrator was mainly surprised because she had been referred to as “the content person” when what she did encompassed so much more.

Creekmore decided she needed a degree to back up and validate qualifications she already knew she had, but the rest of the world didn’t. She chose the University of Tennessee because the distance education program worked well for her, as her business and family were in Nashville. Creekmore admits she entered the program – with full respect for a degree that combined data and technology – thinking there wouldn’t be much to learn, and she is also happy to admit she was wrong.

It’s also served her well in an academic sense, as she has had the opportunity to teach at both Kent State University and Vanderbilt University. In fact, it was partially her experience as a student in an online program that got her the job at Kent State because she knew what it was like to be on the student end of a college-level online course. The course she is teaching this fall at Vanderbilt on digital marketing strategy is now a hybrid program due to the COVID-19 pandemic, and Creekmore said she feels perfectly comfortable with that because of her experience at SIS.

“It really is funny, because I kind of worked my way into the need for the degree, and it’s just given me so much more than I thought it would. I recommend people all the time to UT, because I’ve found so much benefit from it,” she said.

Meanwhile, Creekmore is staying quite busy at work as e-commerce continues to increase in popularity. So just remember, behind everything you put in your online shopping cart, there are teams of people like Creekmore who made that possible.

“There are armies of people out there making the internet and e-commerce what it is today, and most people who go online to shop never think about what it takes to create that product information and build the experience. There are lots of people engaged in getting that done every day,” she said.