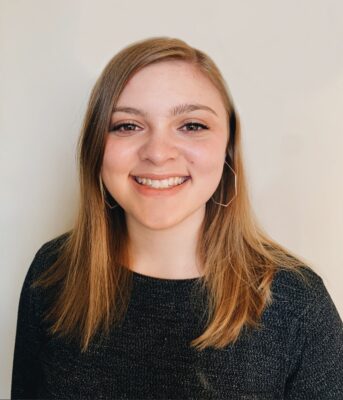 When Brooke Bixler was looking at universities, she was looking for a specific kind of undergraduate computer science program. She took an IT pathway at her Nashville high school, and the computer programming she learned there was something she definitely wanted to do in the future – but she also really enjoyed linguistics and humanities. She wanted a college program that “bridged the gap” between those fields. She chose the University of Tennessee to pursue computer science, but soon discovered that the program she had been looking for did, indeed, exist.

“Two weeks into attending UT I found out about information sciences, and it was like, oh my goodness, this is everything I was looking for,” she said. “You have a bit of the programming, but it’s only a part of it. I also get to take sociology which gives me some of those human interaction components, like looking at why people do things, specifically user design.”

“I started [spring 2020] and I really enjoyed it. It was very critical and problem solving,” she said.

To top it off, Bixler was awarded the SIS Scholarship for the 2020 fall semester, which she said was so unexpected and exciting.

Bixler doesn’t know yet what kind of job she’ll aim for after she graduates with her BSIS, but she does know that the degree gives her a lot of options. In high school she participated in the IT Girls Mentorship Program, which paired her with women working in the IT field. “It was encouraging just seeing women in some component of IT, and a lot of them were not programmers and were in management; but that solidified that I wanted to be in this field and it helped me see there were a lot of different positions.”