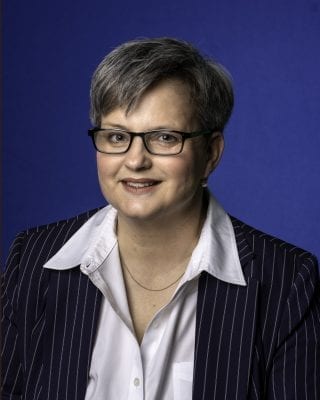 Jennifer Chilcoat (’89) admits she didn’t follow a rule handed to her and other SIS students by their professor at the time, Mike Pemberton. He told them to stay at their first job out of grad school for 3-5 years, and then move onto something new…but she ended up staying at the Central Arkansas Library System for 28 years after graduating. Chilcoat, however, may be an exception to that rule, seeing as she just moved into her new role as director of the Arkansas State Library. She replaces Carolyn Ashcraft, who retired July 1.

“When I hired Jennifer as my deputy director in 2018, it was with the understanding that I was looking to retire in a couple of years. She has been like a sponge, soaking up as much information as possible, learning about state government and our agency, and preparing for the opportunity to be the next state librarian. There will be a time of transition, but I know she has the skills necessary to lead our agency into this next decade,” Ashcraft stated in a news release.

While she may have worked almost three decades for the same organization, the jobs Chilcoat held varied – in fact, her breadth of experience prepared her for where she is today. She started as a reference librarian, and said being in that position in a time right before the ubiquity of the internet was especially fulfilling.

“Back then, it really looked like magic – just knowing the sources, and how to find the answers,” she said.

What followed her reference librarian days were a smattering of jobs, including: branch manager, HR specialist, head of the main library, construction projects manager, and more. She became known throughout the system as the resident moving expert after she suggested the library move its own volumes from the old main library to the new main library. Chilcoat orchestrated the move of approximately 250,000 volumes over three days, which allowed library employees to keep working and getting paid (instead of taking days off for movers to do the work) and also cost far less than hiring a moving company.

In 2018, Chilcoat finally decided it was time for a change, and she took a job as deputy director of the Arkansas State Library. She found the state library environment to be very different from the public library’s and it took an initial adjustment.

“We don’t have the same number of fires to put out, so that was a little bit of a challenge in the beginning, to create structure for myself. The work I do here is far more project-based.  Sometimes at the public library, you might as well not plan your day. It’s also different in that it is so much quieter here, I was not prepared for that,” she said.

Now that she is the Arkansas State Librarian, Chilcoat is looking forward to continuing the broad work the organization conducts, including expanding internet infrastructure, maintaining the Library for the Blind and Print Disabled, and operating the Arkansas Center for the Book. Every state has a Center for the Book, and Arkansas houses its Center in the state library; the purpose of this program is “to encourage reading, writing, and literacy in Arkansas, and to protect the rich literary history of Arkansas by preserving and promoting books and literature within the state,” according to the state library website. At the time of her interview, Chilcoat was particularly excited about author Kim-Michele Richardson, who wrote “The Book Women of Troublesome Creek,” doing a virtual author talk at the Center.

Of course, as director, budgets are always a part of the job, and right now Chilcoat is overseeing the distribution of funds from the Coronavirus Aid, Relief, and Economic Security (CARES) Act. While some of it has already been spent, her goal is to ensure the money is there when it is most needed.

“We’re staying nimble and frugal, so that when future needs are made known to us, we have the funds to respond and can do so quickly,” she said.

She also has her eye on another bill recently introduced in the U.S. Senate, the Hotspots and Online Technology and Services Procurement for our Tribes and States (HOTSPOTS) Act, which aims to provide internet hotspots in under-served areas. Internet accessibility is an ongoing issue in Arkansas, which Chilcoat says is a very rural state, and even hotspots and network cell coverage often fail residents. Fighting to close that digital divide will always be a focus for her. She’s particularly proud of the state library’s E-Rate coordinator, Amber Gregory (and another SIS alum!), who is an expert in helping public libraries throughout the state get funds to expand their internet infrastructure within their buildings, and also helps them acquire discounted internet. The E-Rate process can be particularly cumbersome, but Gregory knows it inside and out, Chilcoat said.

Being a librarian was nowhere on Chilcoat’s radar when she was getting her undergraduate degree In German and English from the University of Tennessee. She thought she would be an English-language teacher, but that changed when she had the opportunity to spend her senior year as an exchange student in Germany. There, she observed language teachers, and realized the job didn’t fit her disposition. It was also there that, after honing her German enough to give someone directions in the language, she realized she absolutely loved providing people with answers.

One of her friends had previously suggested Chilcoat look into UT’s library and information sciences program – at that time the school offered a MSLIS degree – and she decided while still in Germany to take her GRE and apply to the program. Though she didn’t know then where she would be 30 years later, Chilcoat couldn’t be happier with the path she has followed.

“At ASL, I get to empower librarians around the entire state, not just those in my local community. Now, as director of the agency, I can ensure that the issues we face in our state are heard on the national stage,” she stated in a news release from the state library.