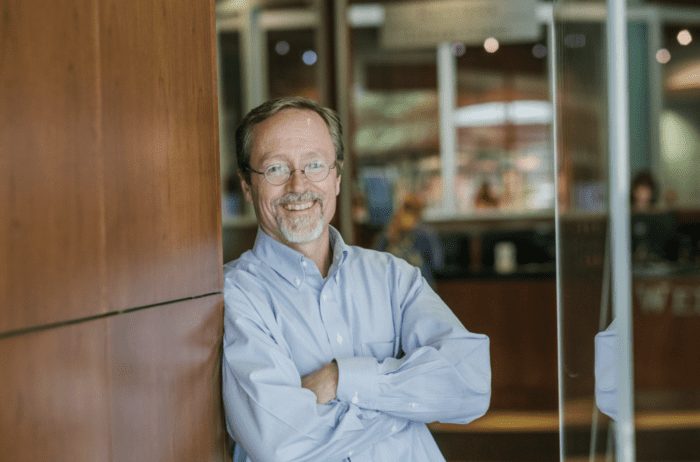 Fayetteville Public Library has long been the Arkansas city’s center, a hot spot for learning, special events, and other communal gatherings. In 2005, it won the Library of the Year award sponsored by Library Journal and Thompson/Gale Publishers – the smallest library ever to earn that accolade, said the library’s current director, SIS alum David Johnson (‘93). Johnson is the recipient of the 2020 SIS Distinguished Alumni Award, and he is receiving it in part due to his work at the library.

Johnson has been steering the library into a massive renovation, which is packed with new resources for the community. Here’s some of what is included in the 80,000-square-foot expansion Johnson proposed, and is now overseeing:

“We have a library that was an award-winning response to the community, and it’s being loved to death, and now all of a sudden all of these people are moving here,” Johnson said. “We had to grow the space and we had to do it responsibly and not make more space for the sake of more space.”

As Johnson finds himself in the midst of this massive renovation, he’s reflected on the winding route he took to get to where he is today. He had already earned an undergraduate and graduate degree in communications from the University of Arkansas when he decided to pursue a degree in library sciences at the University of Tennessee, Knoxville.

It was a rough transition, initially; he loved Knoxville, with its college sports, proximity to the mountains, and lively music scene. But he was also broke, and struggling. By happenstance, the interim director of the school at the time, Glenn Estes, stopped to talk to Johnson one day and ask him how he was doing.

“I told him I’m broke, I’m trying to live off a dollar and a quarter a day, and I’m hanging in there, doing the best I can,” Johnson recounted.

Shortly thereafter, Johnson received notice that he had received a scholarship and from that moment on, with his financial pressures relieved, Johnson began to flourish in the program.

“Everything aligned and the doors opened, and I was there right at the time when the internet and online research was really happening. I got to work at Oak Ridge, and it was really an eye-opening experience. At the end of the day, it felt like I was really learning tools I could use in the marketplace,” he said.

Johnson graduated, and he and his wife moved back to their hometown of Fayetteville. He started a job as a reference librarian at the public library, but switched gears and started working at Tyson Farms when they decided to start their family.

Johnson said he landed a job at the massive agriculture corporation by convincing them information sciences fits into every setting – that managing a call center wasn’t much different than managing a reference desk. They liked his pitch, and from there, Johnson made a name for himself at the company.

“I got known as a mess cleaner upper and project manager. They would be implementing a new software package and they would drop me in and I’d add form and structure to the process, and most importantly I would earn the trust of the employees,” he said.

After about 15 years there, the director position at the library opened up, and Johnson told himself it was a “now or never” shot he had to take. He said it was intimidating to leave his job at Tyson, but he’s glad he made the leap.

“The love of the library was enough to make me want to give it up. I was very lucky to get the position. It’s one of these jobs where you wake up excited every day to go do what you do, excited to see the smiles on the public patrons’ faces and helping them solve problems,” Johnson said.

One of the latest problems to solve has been how to operate the library during the Covid-19 pandemic. While some construction is able to go forward unhindered due to the absence of library patrons, other parts of it are stalled, such as delayed furniture and equipment shipments. The renovation unveiling, initially intended for this fall, will likely happen in spring 2021, he said.

In the meantime, the library has live-streamed events it had planned, and is conducting curbside service for check-outs.

“Our circulation and our program attendance has not fallen off, even though people can’t physically come into the building. We keep finding new ways to achieve our vision and goals, just with new tactics,” he said.

It’s that optimism and drive to continue providing information resources to the public that earned Johnson this year’s Distinguished Alumni Award, and he said he was stunned when he was told of the honor. He’s also served on the SIS Advisory Board in the past, and said he is immensely proud of the school and how it has changed to accommodate students and grow the field.

“I would tell every student that you’ll get every penny back and more in your investment at SIS. Following your passion is key,” he said. “It might not be a straight path but ultimately if you keep your passion as a north star and keep pushing towards that, when you get there – and you will – it is such a rewarding feeling. And all other things go away. All those other pieces become less important when you’re in that sweet spot in life when you’re following your calling.”