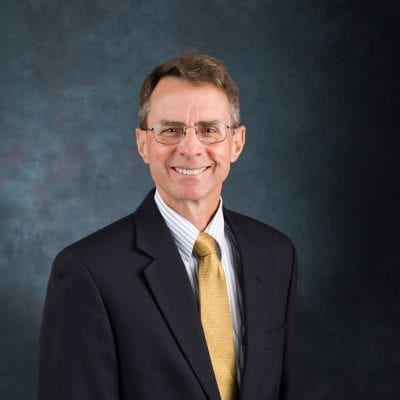 Frank R. Allen (’91) has such fond memories of his time in what was then the Graduate School of Library and Information Science (GSLIS) at University of Tennessee, Knoxville, he came back 26 years later to serve on the School of Information Sciences Advisory Board. For Allen, giving back to the next generation of information science professionals was worth carving out a little extra time in his very busy schedule as an administrator at University of Central Florida’s Libraries.

“I quickly accepted the nomination because the two years I spent at UTK were very formative in my library career. They really set me off on a great start,” he said.

Allen said he worked part-time for the director of the school, and then also began working as a graduate assistant at UTK’s Hodges Library. Then, right after he graduated, he was hired on as an adjunct with a split assignment between the school and the library. After a year in that position, he moved on to the Virginia Commonwealth University Libraries as head of administrative services.

“I did gravitate a little bit back to my business roots,” said Allen, who had a previous career in real estate and banking, and has an MBA from the University of Texas at Austin.

At VCU, he had a full faculty position with librarian status, and oversaw the budget,  human resources staffing, recruitment and facilities. But he still got to spend a few hours every week at the reference desk, as he enjoyed the experience of being a librarian serving patrons.

After six years there, Allen had the opportunity to move back to his hometown of Orlando, Florida. An associative director job had opened up at UCF Libraries and it would be similar to what he was doing but with more responsibility. He’s been there since 1998, and now is serving as interim director of the libraries. While he will still be overseeing some of his previous duties while in the interim director, he’s taking on new ones, including the renovation of the entire library.

“It’s amazing, I’ve never left and it’s been great. I’ve been here for 22 years in May, and again, every professional experience I’ve had, including the brief time at UT, has been a very positive experience,” he said.

Allen will be ending his term with the SIS Advisory Board this spring, and said he would encourage any SIS alumni who has the time to consider serving on the board.

“It’s been a joy to be a part of the board,” he said. “And the good news is, that there hasn’t been a lot of areas where we’ve had to say, ‘Have you thought about this or put more effort into this?’ It’s just so impressive,” he said.

Allen credits SIS Director Diane Kelly, the faculty, staff, and all the students with making the SIS program what it is today. He’s particularly pleased with the growing recruitment efforts and subsequent increase in enrollment, noting that the distance education component has allowed the school to reach out across the country.

“In addition to it being a good business decision to boost enrollment at the school, it’s a wonderful service to students who can’t move to Knoxville,” he said.

He is also thrilled with the addition of an undergraduate major in information sciences, which was opened for enrollment in fall 2019.