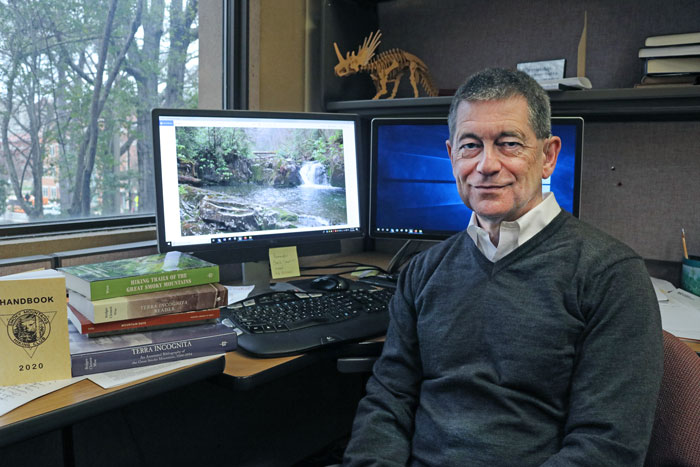 It was his longtime love of hiking that pushed Ken Wise from being an accountant to becoming director of the UT Libraries’ Great Smoky Mountains Regional Project in 1998. So it was a little bit of being in the right place at the right time, and a lot of passion.

Even before Wise had completed his MBA from the University of Tennessee, he was working for the Libraries in their accounting office; when he graduated, he was offered a full-time position there during a game of handball with the then-dean of the library. It was the next dean who decided she wanted Wise to become a part of the faculty and to work on research projects. This spawned two large projects that still exist today: The Center for Children’s and Young Adult Literature, and The Great Smoky Mountains Regional Project.

“When you’re in the business office, you don’t often work directly with librarians, you’re off by yourself. Here, I’m in the mix,” Wise said with a broad smile.

As he began to work more on the library side of Hodges, it became apparent that he should earn what was then a graduate degree in library and information sciences. He graduated with his MSLS degree in 1989.

The Center for Children and Young Adult Literature, which Wise started with former SIS faculty member Jinx Watson, included programming such as bringing in award-winning children’s book authors and illustrators to lecture, and the establishment of an examination collection of the most recently published books for librarians at school and public libraries to peruse first-hand. While that program was near and dear to Wise, it eventually moved out from under his purview, and is now housed in the College of Education, Health, and Human Sciences, Wise said.

But the Great Smoky Mountains Regional Project has grown into an endeavor of epic proportions, becoming the signature enterprise of the UT Libraries.

“People want to learn about special collections and they want to know about the Smokies. It’s an intriguing place, it’s fascinating,” he said.

Wise started the Great Smoky Mountains project with his colleague, Anne Bridges, shortly after publishing “Hiking Trails of the Great Smoky Mountains,” the definitive guide to hiking trails in the Smokies. He’s hiked all over the region since he moved to Knoxville in his high school years, and the book was inspired by getting a little lost once; he searched for a definitive book about the area’s trails, and couldn’t find one. So, he wrote one. Two years later, he found himself a part of the project, on the hunt for the next great Smokies collection to add to the Libraries’ special collections.

Sometimes, he has collections fall into his lap out of the blue, through coincidence and luck. Other times, Wise tracks down people in the know when he hears about the existence of a possible addition.

“When you bring in a collection, it feels like such a win,” he said.

He knows the provenance for every part of the collection, and the histories of each collection’s creators. His eyes shine as he talks about the photo collection of Albert “Dutch” Roth, who was an amateur photographer and an expert backcountry hiker who captured photos of the mountains at the turn of the 20thcentury, before the national park was established. He speaks with pride about winning an IMLS grant to do a project with a collection from the Pi Beta Phi Settlement School, which morphed into the renowned Arrowmont School of Arts & Crafts in Gatlinburg. Wise is in his element, and has been for more than 20 years – and he said he couldn’t be happier.

For each of the collections the library receives, Wise not only acquires the metadata and assists in archiving the materials, but also is involved in digitizing many of the collections. Building the definitive collection of Great Smoky Mountain materials is the project’s first goal, but the second is to create digital sites to make the material more widely accessible, and the third is to do research. In that vein, Wise has written and edited several publications, including Terra Incognita: An Annotated Bibliography of the Great Smoky Mountains, 1544-1934, as well as an anthology of the “best of” the early writings from the Smokies.  After finding a “lost” manuscript by Paul Adams, the founder of Le Conte Lodge on Mount Le Conte, Ken and Anne published Smoky Jack, the story of Adams and his dog on Le Conte.  A lot of this work has been done with his colleague, Bridges, who retired from the library faculty in 2017.

“We help a lot of other people do research, scholars all over the country come to us. We like to think we’re experts on the Smoky Mountains,” he said.

The project doesn’t focus solely on older works, either, he said. Currently they are collecting oral histories of people who survived the Chimney Tops II fire that ravaged the Smokies and Gatlinburg in 2016. Wise said he knows the next challenge will arise when born-digital collections start rolling into the library’s possession, and that will be an entirely new experience for him and others who are accustomed to handling and organizing only physical materials.

Though he’s been on this project for 22 years, Wise said the Great Smoky Mountains never cease to amaze him. The mountains have a unique ecology and a history that includes everything from Cherokees, to the early European settlers, to its current incarnation as a national park. He just hopes to be a part of preserving it all, and showing it to the rest of the world.