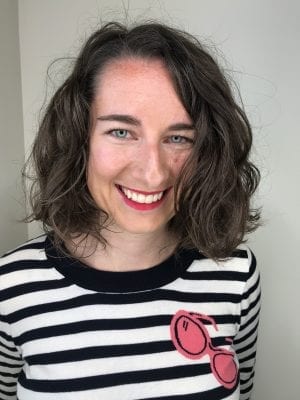 Brooke Olson (’19) was a project manager for almost a decade when she decided it was time for a career overhaul. The Nashville resident began taking distance education classes through SIS in 2017, but she knew she wanted a look at what happens behind the scenes in a library before deciding that was her endgame.

“I have no library experience at all and I knew if I wanted to find a job in the library system I needed some hands-on experience,” she said.

So Olson applied for a practicum with the Nashville Public Library and was accepted. The practicum experience with NPL was a varied one that allowed her to get a taste of many library positions and tasks at the system’s main, downtown library. She spent two days in every area of the library, including popular materials, public technology, the children’s department, cataloging, special collections, the reference desk, and much more.

Not only did Olson get to see how a large library operated, but she spent time at two of the library system’s smaller branches, Bellevue and Hadley Park. She followed that up with a six-week long-term project in special collections at the main library.

“I got to observe the programming in special collections, like the civil rights presentations that they gave, it was all very interesting. And I part of my time processing a donation that they received that was notes and artifacts from a country music historian,” she said.

The widow of the country music historian, Bob Pinson, donated an array of items he had collected over the years in relation to his work, and Olson processed a lot of it. She said Pinson built up the Country Music Hall of Fame’s recording collection to 200,000 unique and individual country music recordings; the items donated to the library included newspaper clippings about Hank Williams, as well as a lot of items and documents related to the Grand Ole Opry.

“Specifically he had items about the partnership when the Opry did recordings for the Armed Forces Radio in the 40s and 50s. So a lot of notes there were printouts of every single Opry performance that was done during that time – the name of the performer, the songs, the year it was performed. In addition to that, there were about 140-150 audio recordings of Hank Williams, Ole Opry performances, and random country artists; and there were also VHS tapes he had recorded off of TV.”

Altogether, the experience cemented Olson’s desire to work in libraries, and showed her how extensive the work is that librarians do. One aspect she particularly enjoyed was the day-to-day variety of the work.

“I helped somebody set up an email address one day, and another apply for a job. But at one of the branches, there was a woman who came in and was going to be a long-term substitute for a fourth-grade class, and she wanted books about the ocean she could bring in to the kids,” she said. “I like working with people and the daily interaction and how different it can be each day.”

Her hard work in school and at her practicum paid off and she just accepted a position as an instructional librarian at South College in Nashville.

Olson said her classes definitely gave her a solid foundation for some of the work she did during the practicum, and she enjoyed putting what she learned to work.

Overall, Olson said her experience with SIS was a great one, and being able to take a practicum and earn credit hours for it was a major highlight. Another positive for her was the synchronous set-up of the classes and feeling a part of the SIS community.

“I have another master’s in public administration that I also did through a different school in distance education and it was completely different,” she said, noting that it was asynchronous so there was very little opportunity to talk with faculty or other students in real time.

The synchronous classes through SIS allowed Olson to feel more involved, and she enjoyed being able to interact in with faculty and students as if they were in actual classroom together.

“It really made it feel more like school and I felt like I was more a part of the program and I grasped concepts and learned better through the live classes and interaction,” she said.