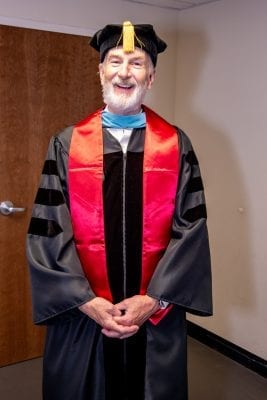 Rick Wallace takes the traditional tenets of being an academic librarian seriously – he ensures students have the skills and access to information they need, and maintains a space for them to study and explore that information. But he also takes it a step farther by making the library a place they can go for help beyond academics. He’s affable, kind, energetic and intelligent.

“He cares a lot about representing librarianship in a positive light. We’re more than just there to hand people information, we’re there to support them in all ways. It’s truly a calling for him,” said his current coworker and former employee, Nakia Woodward (‘03), who is also an SIS alum. “He engages with the students so they always feel comfortable coming to him for any information need or if they need help navigating the university, or anything like that, they have a bond with him.”

Wallace is the associate director of the Quillen College of Medicine Library at East Tennessee State University in Johnson City. Wallace’s work with ETSU started in Memphis, shortly after he graduated from the University of Tennessee, Knoxville, with a master’s degree in library science. The position he held was a unique one funded by an Area Health Education grant, and it fostered his enduring love of outreach work.

“I’d go to rural hospitals and knock on doors and say, ‘Can I help you with library services?’ I targeted doctors and nurses and got them literature, because rural hospitals didn’t have libraries back then,” he said.

The grant eventually ran out in 1995 but the medical library at ETSU took Wallace in; the original grant position operated through the school, but now he was to work directly for the institution at the medical library. This was serendipitous for the Bristol native, who was happy to return to his East Tennessee roots and family.

Throughout his career, Wallace continues to educate himself and those around him – students and staff alike. He’s a lifelong learner who, in addition to his master’s degree from UT, has earned the following degrees: master’s degree in epidemiology (public health) from ETSU; doctorate in higher education leadership from ETSU; master’s in organizational management from Tusculum University; master of divinity from Mid America Baptist Theological Seminary; and master of art in theology from Columbia International University.

Wallace’s duties also extend beyond the library. He teaches a variety of student classes, including: evidence-based research; using the PubMed database; assessing population health; and a class on comparison intervention. When he’s not teaching or at the library, he’s involved in community work such as helping at Remote Area Medical clinics, which provide medical care for people in rural communities. He also sits in on family medicine meetings in Bristol and Kingsport, as well as surgery meetings in Kingsport, to field clinical questions from the physicians at those practices.

And, as many academic librarians do, Wallace does research. He and a student are currently working on a systematic review of employment assistance programs that help people addicted to drugs. On that same note, he’s participating in a program called Project ECHO, which also addresses the opioid crisis.

“We have clinical people who work with insurance companies who connect us with doctors treating patients who have a problem with opiates. We’re going to use Zoom to meet with the doctors and our panel will advise them on how to treat their patients,” he explained.

In recent years, Wallace has turned even more focus on his students – and if the number of awards he’s received from students are any indicator, he’s making an impression.

Wallace not only supports students in their academic work by providing academic support, but also with small, meaningful gestures. He buys pizza for students when it’s

obvious there are exams coming up and they are all in the library studying. He also puts out “junk food and calories” on an honor system of 35-cents per item, so they can have food nearby for less-than vending machine prices. He’s even helped with a yoga class hosted at the library, and there are exercise bikes available there for students so they can turn their brains off for a minute and treat their bodies to physical exertion.

“Just anything I can do to soften the blow and make it bearable, to be a cheerleader,” Wallace said of his methods.

He was one of 17 faculty members that the medical school’s graduating class of 2019 chose for special recognition as an outstanding educator and mentor, with the award called the Scarlet Sash. He was also given the 2019 Caduceus Award, which is given by the school’s Cadeuceus Club and honors those “individuals who go beyond their usual duties to assist students in the pursuit of their medical education.” Yet another honor he earned by student vote in 2019 was as a nominee for the “String of Pearls” which is comprised of 34 faculty members who are selected as the most influential over the students’ four years of medical education.

“I guess I have a bunch of students who like me or something,” Wallace jokingly said.

The recognitions have come shortly after his job switched with less focus on outreach and more opportunity to teach, he said. He is passionate about getting health information into the right hands, so teaching students how to build diagnostic and critical reasoning skills is one of his priorities. After students graduate and become physicians, they will need the ability to seek out new information in order to stay up-to-date on science and evidence-based practice.

According to Woodward, it’s no fluke that Wallace has racked up so many honors from the students. She said his passion shines through in everything he does, including when he teaches.

“He wants to be a player in the classroom, teaching them how to critically appraise articles, how to do appropriate searches to find the best evidence. He’s very much continually learning,” she said. “He truly is one-of-a-kind and our profession is very lucky to have him in it.”