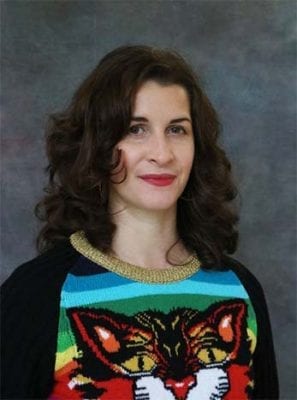 Katie Knight has traveled from one end of the information sciences highway to the other – from public libraries to archives, and from archives to metadata.

As part of her job as an assistant librarian at the New York School of Design, she cataloged and archived items requiring metadata tagging. It was then that she found a new love within the information sciences, and pursued a job at Oak Ridge National Lab that focused on data and inventive solutions.

“They were looking for someone to be forward-thinking and ready to innovate because they had fairly traditional cataloging and archiving processes. They were very open to doing new things, like teaching myself Python, and I just started exploring new ways to do computational metadata,” she said.

Knight considers herself a “humanities gal” but quickly was immersed into the world of problem solving with technology. For example, as the ORNL library quickly increased its eBook catalog, it became difficult for staff to keep up with new additions and to clean up existing data. In the past, interns were often set to work on tasks that could be grueling and repetitive, she said. But it occurred to Knight that there could be a better solution that would free up the library staff’s time to do other work.

“I thought, you know what else is good at doing things over and over? A computer – so I started looking for anything published in library literature about how people were handling these problems,” she said.

Then she began to learn coding and applying it to the work at hand – and she used a lot of the free open source solutions offered by other librarians to do it. Learning to code and find innovative solutions to these problems was a gamechanger for Knight. As word began to spread around the lab that there was a librarian who could code, she began joining more special projects that expanded her skillset.

“Having a really supportive supervisor who was fine with me being curious and trying new things was a big part of it. It was also a really safe place to fail, and I failed a lot,” she said. “Next thing I know, I’m part of the advanced data and workflows group.”

Now, Knight is intrigued by making big data searchable, such as the massive datasets produced by super computers. She said so many researchers and scientists are gathering related data, but solutions are needed to make it easy to search, to connect the dots.

After finishing her master’s degree and moving around and up at Oak Ridge, Knight was a finalist for a position at MIT. At the same time, she was introduced to the chief data architect at ORNL so she could do more research with him, and he encouraged her to pursue her PhD.

“It was something I’d been kicking around, and then when I found out that Dr. Kelly was director – my class at UNC with her was one of my favorites, and when I met with her, everything seemed to fall into place. One thing led to another and this just felt like the most natural thing for me to do,” she said.

Knight said that, while she is still new to her PhD studies, she has enjoyed talking with others in her cohort about their research and experiences, and she also likes the diversity of working with faculty throughout the College of Communication and Information. She is also excited to learn more about her interests, and discovering new interests, such as a love of statistics.

“It’s an area that is developing rapidly, I know I’m interested in developments in metadata and how that affects people’s ability to discover stuff. The way you categorize things affects people’s ability to find. That’s a problem whether you’re talking about big amounts of data or your computer desktop,” she said. “I think we should constantly reevaluate how we classify things and map the world of information. Things do change and should change.”

A lot of her ideas and interests stem from puzzles she’s observed at ORNL, information problems that need new ideas and innovative solutions.

“I fully expect my perspective on these problems to change, but also just bouncing ideas off of all these beautiful minds here, where there are people who are much more academically focused. It’s a very different perspective on how people think about these problems,” she said. “Up until now, my research has been about how do we fix a thing that’s broken versus how do we think more abstractly and look at things from a broader perspective and more rooted in theory.”