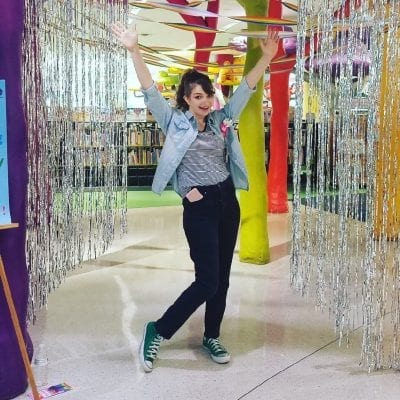 When MSIS student Dylan Miller heard local LGBTQ+ nonprofit organization OUTMemphis speak at her library about LGBTQ+ inclusivity, it planted the seed of an idea: why not host a Pride event at the library? She wasn’t the only one who understood the importance of the organization’s message and had the same response – two other Benjamin L. Hook Central Library employees met up with Miller and an OUTMemphis representative, and together they decided that such an event should happen.

“We anticipated something very small at first, and we wanted to get administrative approval before going forward. Library administration were very excited about the event, and it grew into something much larger. We got the participation of other departments, and the Children’s Department was already planning a Rainbow Family Story Time, so we coordinated with them,” she said.

She ended up leading the planning committee for the event, in collaboration  with these other departments.

Miller has worked at the library for two years, after previously holding a variety of jobs, including positions with a law firm, and for AmeriCorps Vista. She applied for the library job because her undergraduate degree in English could be used there, and had no other expectations. It wasn’t long after she started the job that she fell in love with it, and once she became full-time, she applied to the MSIS program at the University of Tennessee.

She said to be put in charge of an entire event at the library two years into her career was both an honor and a challenge.

“I’d never led something that large before and I learned so much just from doing it. I really think that it was just a great program and a lot of people took a lot away from it,” Miller said.

Memphis, Pride is celebrated in September, and the Memphis Pride Parade always takes place on the last weekend of the month. Therefore, the event took place in early September to “kickoff” Memphis Pride month. The event featured all sorts of activities for people of all ages,  as well as a lobby full of nonprofit organizations that provided information for visitors. A microphone was also set up in the lobby for the attending organizations to use and promote their resources and services. U.S. Rep. Steve Cohen, Tennessee State Senator Raumesh Akbari, Councilwoman Gerre Currie, and Councilwoman Cheyenne Johnson were keynote speakers at the event.

Everything went off without a hitch, and Miller said that was in part due to the collaboration with OUTMemphis. She said the organization’s experience with hosting LGBTQ+ events provided guidance on handling security and potential conflicts.

“I’d strongly recommend that if your area has any LGBTQ organizations, to follow their lead and direction as a whole to make sure you’re keeping your community’s interest in mind and not just spear-heading what you think it should be,” she said.

Overall, Miller said it was a great event that she recommends other libraries consider hosting.

“It really is an important program to offer because it establishes your library as a safe space,” she said.