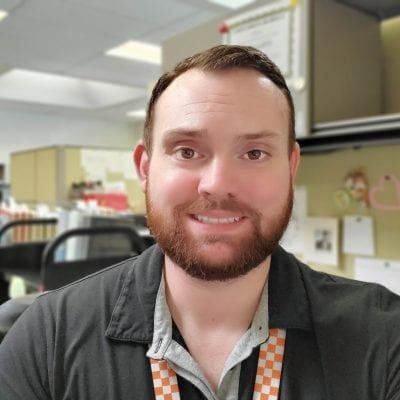 When Will Biggs left the United States Marine Corps after 10 years of service, he started a job hunt that proved to be a bit rougher than he had anticipated.

“I was looking at county jobs and had probably applied to at least 15 positions, and nobody gave me a chance until the public libraries did,” he said. “I started working at the library and I realized I liked it.”

It was quite the change from his military service, for which he received a Purple Heart in 2006 after suffering injuries from an IED blast. Both the injuries and his desire for a more peaceful profession led him to retire from the military and find a new career; but he never expected that career to be in the information sciences.

Biggs, now a part-time assistant librarian at the Tustin Library in Orange County, California, said he ended up enjoying the work so much that he wanted to pursue a master’s degree and become a public librarian.

“Public librarianship is kind of like being a social worker, that’s what I enjoy about it more than anything. The vast amount of demographics and all the ways I can help people,” he said.

It was just kismet that his father’s alma mater, the University of Tennessee, had a distance education program that offered the very degree he wanted.

“The first piece of clothing I wore was UT, so that played a big part in my decision. And then I looked into the program, and I saw how highly ranked it is in information sciences, and it was just the program across the board, how inviting it was,” he said.

The distance education program has also worked well with his work schedule, and he said he was surprised at the level of engagement the faculty and students have despite the distance. He earned both an associate and bachelor degree online, through American Military University, so he already had some experience with online education. But the SIS program exceeded all his expectations.

“One of the things I’ve repeatedly told everyone I’ve talked to is that I’ve never been in an online program that just literally felt like I was on campus. I’ve been really impressed with how this program goes out of the way to make sure everyone feels like a student as opposed to someone behind the computer getting a degree,” he said. 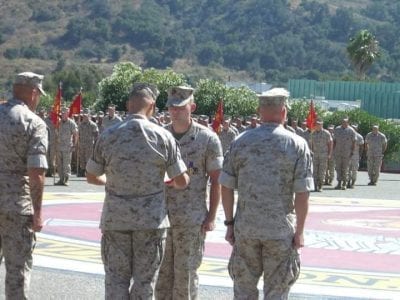 Will Biggs receives the Purple Heart for injuries suffered during his service with the USMC.

Now that he’s in his second semester of the program, Biggs is discovering new aspects of information science that pique his interest. For example, classes with Professor Peiling Wang have illuminated how data analysis and management can be useful and versatile, he said.

“I never thought I would’ve liked data at all until I started taking her classes,” he said. “The data is just amazing because of the way you can manipulate it. Depending on how I query it, I can effectively mine it for whatever purpose that I need.”

Biggs said some of his experiences in the military were actually oriented around using information science skills, even though he didn’t know it at the time. For example, he used a GIS program proprietary to the USMC to run reports of small arms fire or IED targets in various areas, to pinpoint where activity had increased or decreased. He said he is considering getting a minor in computational mathematics, which requires him to take statistics and GIS classes.

“I’ve been circling back to something in this field my entire life,” he said.

While he couldn’t be happier finally becoming a Vol like his father, Biggs was also pleased to discover that UT is veteran-friendly.
“The veteran’s center on campus is always reaching out. I’m constantly seeing things geared towards veterans whether it’s tickets, events, learning resources. When I think of military friendly schools, I definitely think of UT now,” he said.