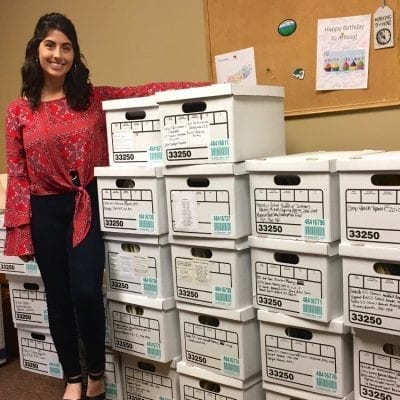 Rebecca Howard’s (’19) interest in archives was first piqued while working at her university library. She was earning her undergraduate degree in history from Stockton University, and was working at the university’s library when it merged with the Noyes Museum of Art, which gave her an opportunity to be an archives assistant.

“They had documents on exhibition records, the Noyes family, and other art records pertaining to the museum, and governance records,” she said. “I just got to work and created the processing plan and, after a couple of weeks, I decided that that was what I wanted to do.”

She decided to pursue a master’s of science in information science at the University of Tennessee. During her schooling, opportunities for jobs started popping up, and the ones she landed would affirm she’d found her niche in archives. While at UT, she was on an accelerated three-semester plan to earn her master’s, and also worked as a graduate assistant; she had plenty to do already, but found time to squeeze in more and get hands-on experience in her chosen field. 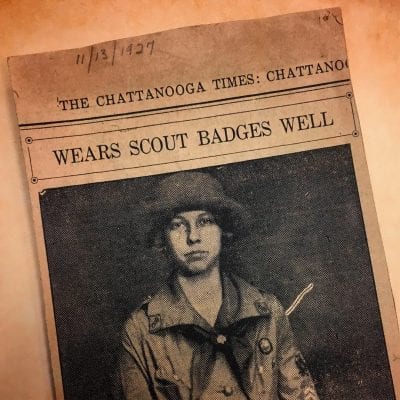 “The Girl Scout Council of the Southern Appalachians put out a job listing for an archival assistant while I was home on Christmas break. I knew I had to get this, and I thought a million people would go for it,” she said.

Howard landed the position and started the job in January 2019 – and there was plenty of work to be done. The council serves 46 counties throughout East Tennessee as well as parts of Georgia and Virginia. She walked into a storage room filled with boxes dating back to the early 1900s, all filled with documents of varying significance.

“I could see why they wanted an information sciences student to come in and really take a look at it. There were financial records, government records, board of directors notes, historical documents, property records, camp records,” she said.

Howard worked closely with the organization to wade through jargon and priorities in order to sort everything into proper categories. Rather than setting up an archive database that might be difficult for the council to maintain, Howard created an Excel spreadsheet. Every box had a title, dates written on it, and notes on it about what it pertained to. Then she gave every item a barcode and a location designation so users could reference the spreadsheet, find what they need, and be able to locate the proper box and item. Some of the archives that needed to be kept but wouldn’t be referenced were moved offsite, to make it easier for users to access what they did need.

“They were so fascinated because it was so much easier and made more sense. It was really nice getting to work with everybody there and it was a great time. We wrapped up in May and now they have a nice, organized, clean room,” she said. “I was all about the before and after photos.”

That job gave Howard great hands-on experience that she would then turn around and use at the next position she started in the summer, as a digital archivist with the Black in Appalachia project. She is the third SIS student to join the East Tennessee PBS project, which is documenting the history of black communities and people via archives, as well as visual and oral recordings. This project is different than the Girl Scout one in that Howard mostly does digital archiving, and she’s found a new love of metadata in the process.

“This was more public history and storytelling, and it’s more library-based and archive-based,” she said.

The position was such a good fit for Howard that she was hired on as the digital history director. She assists in meeting with members of the community and record their items in a digital library, OMEKA. OMEKA is a platform for digital libraries that has interactive functionalities, such as a feature where you can plug in a coordinate or address of an item and it will add it to an interactive map.

“It’s great to have a digital library site, it’s so easily shareable. Whenever we do research and engagement, we can show what we’re doing,” she said.

“It’s fantastic because some people have had all these photos and documents, and a lot of them are older and you get to talk to them and they get so excited when we want to see their stuff,” she said. “Then we get to turn it into public education on experiences of African Americans in the Appalachian region.”

Howard said this job is an affirmation that she chose the right career path – and it gives her a great response to anyone who once thought her undergraduate degree was useless.

“When you’re getting a degree in history, everyone goes, ‘Oh, what are you going to do with that?’ And I’m working in a field with my undergrad and my master’s degree. Now I can show other people what I do, and get them interested in it,” she said.