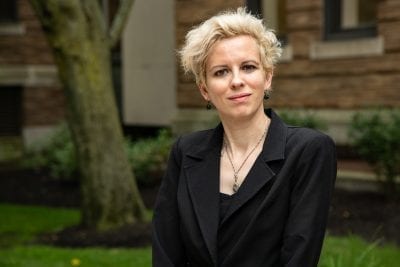 When Danielle Pollock was an undergraduate, she and a friend devised a plan to open an independent bookstore someday. The rise of online shopping and e-books stymied their dreams, but actually led to some of the research work that the UT PhD alum does today.

“I always knew I was interested in libraries – not just that I liked books, but I liked doing research. When I was looking at potential master’s, I knew that if there was one thing I wanted to do for the rest of my life, librarianship would be that,” she said.

“I had the very rare position of having my graduate research assistantship become my full-time position,” she said.

Her first position in a library, before earning her master’s, was working for the children’s department in a branch of the Houston Public Library. After getting her master’s, she became a technical librarian at the Sandia National Laboratories in Albuquerque, New Mexico, which was a uniquely different experience than her previous library positions and allowed her to pursue the research she was interested in conducting.

“I had a lot of ideas for research, and one of the projects I was working on was uses of e-readers and tablets…I wanted to continue exploring things in the area of looking at communities of scientists and researchers, and their information behaviors that change, and don’t change,” she said.

It was during that research that Pollock decided she wanted to pursue a higher degree.

“I was familiar with the UT program and I decided it was the right one for me, specifically because they do a lot of work with ORNL [Oak Ridge National Laboratories],” she said.

She worked with Chancellor’s Professors Carol Tenopir and Suzie Allard on the DataOne project during her time as a PhD candidate, and has continued the work she started on her dissertation. That researched information adoption in healthcare, such as the changes that innovation brought about in the healthcare environment and communication behaviors. For example, an app that allowed physicians to communicate via secure text messages to each other – which brought about concerns of the physicians’ privacy when it was installed on a private phone.

After she graduated with her doctoral degree, Pollock became an assistant professor at Simmons University in Boston, where she teaches information to technology classes, metadata, and intersectionality and information technology. She said she loves teaching and that she is able to continue the research she started, which has involved into interdisciplinary communication and cooperation between scientists.

“I’m going to start [a project] looking at first-generation college students who go on to pursue research careers and how those particular innovative individuals experience the process of and seek information on choosing a graduate program and then choosing their first careers in a research-intensive field,” she said.

As for her experience at UT, Pollock said she was given a lot of support and opportunity. She was able to collaborate with researchers whose work she’d been reading for years, and she was exposed to working with people in other disciplines.

“I will not kid anybody, it is quite a bit of work, though it’s a very unique experience and I have been able to do a lot of exciting things,” she said.