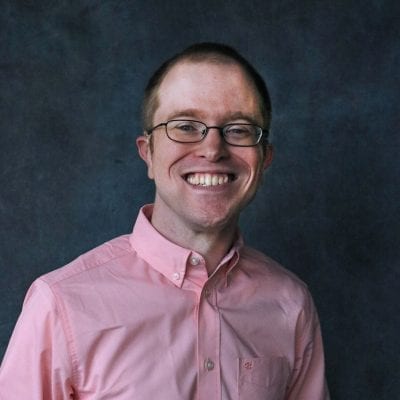 While he was earning his master’s degree, he took on teaching and found his passion, which he said shouldn’t have been a surprise, as teaching “runs in his blood.”

“I had a passion for teaching, and I come from a long line of teachers in my family. Both my [maternal] great-grandparents were professors at NYU, my aunt is a teacher, and my sister is a teacher,” he explained.

Before he started teaching, Mallary had some concerns. As a result of being born 16 weeks early, he has profound hearing loss. He wondered how he’d be able to engage a classroom and communicate effectively with students due to his disability. Those concerns were all addressed when he started teaching as a graduate student at Wake Forest, and he was provided with assistive technology that allowed him a smooth transition into teaching.

This experience would direct his next career and education decision. While more than one professor had encouraged him to get his PhD, Mallary wanted to gain some real-world experience before furthering his education. He became adjunct faculty at two community colleges in North Carolina, and at one of those colleges he became the senior web developer and webmaster. There, he taught workshops on accessibility and was a liaison between disability services and both the college’s IT department and library.

“I was the interface for different departments to help ensure that the digital materials being used throughout the institution were accessible. In doing all of that, and in teaching, I quickly decided that I liked the idea of teaching, and doing research on accessibility,” he said.

Mallary sought out a position that could fulfill those criteria and found one as a lecturer of communication at Western Carolina University. Three of his colleagues at that school had graduated with PhDs from CCI, and the decision was unanimous: Mallary should go to Tennessee and get his doctoral degree.

“I can’t pretend I know all the answers, so having the interdisciplinary focus that CCI has, really forces you to expand boundaries and discover different ways of approaching the same problem,” he said. “When I first started, [SIS director] Dr. Kelly encouraged me to tap into the expertise in the various schools to understand the complexities of what I’m researching, and to build relationships with members of the college.”

“Dr. Potnis and I hit it off, and very quickly I realized that, in getting to work with him, I’d be gaining further experience as a researcher,” Mallary said. “I got to see firsthand through talking and working with Dr. Potnis how my research can be a means of advocating for people with disabilities.”

Over time, Mallary shifted his research focus to his current area of expertise: helping students in higher education who have disabilities to develop their information literacy skills.

“From Dr. Potnis, I’ve learned to fully embrace my identity as a researcher and to think outside the box. A phrase he uses a lot is to think of how I am ‘creating value’ with the research that I do. That is what is going to stick with me for years to come as I collaborate with him and others – what am I doing to create value?” Mallary said. “If my research can help other students overcome their adversities, excel in higher education, and become productive, contributing members of society, then I’ll consider everything that I’m doing worthwhile.”