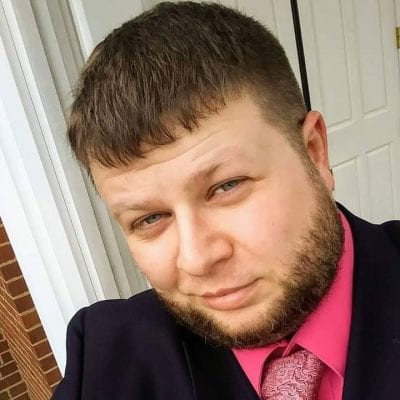 Education: Training as a submarine nuclear reactor operator in the Navy, and an undergraduate degree in history from Eastern Connecticut State University

Career: I grew up on a ranch in Central Montana, then I went to being on a submarine in the Navy, to being a librarian in East Tennessee. I went to college and it just wasn’t for me at that point, so I enlisted in the Navy and became a submarine nuclear reactor operator. I did six years and two deployments overseas into the Persian Gulf area. I got out of the Navy and I was going to go back to school and pursue creative writing and a guy in my submarine said, “Clancy, you’re into history, you like it, you’re good at it.” He was right, so I went to Eastern Connecticut State University and got my degree in history.

I was thinking I’d go the professor route, but realistically I figured I’d be an awesome high school teacher, so I started substituting at local schools. As I was doing that, it dawned on me: I was a librarian.

I looked at low-level librarian jobs across the country, and I knew I needed to live by the ocean or the mountains, and I wanted to live somewhere more rural and that had a lot of library positions open. It really came down to East Tennessee. I just got up and moved and got a job with Dick’s Sporting Goods, and then a library position came open in Bristol and I applied for and got that job. I worked in technical services half the time, and the other half of the time I worked in the YA section and did programming and summer reading and stuff like that.

Then, a position opened up and my boss said, “Clancy, you need to do more, you have to apply.” I applied for it and became assistant director at Sullivan County Library.

After that, I moved on to become the military PLA coordinator at Northeast State Community College. My job was to provide service members with the college credits they were due and had earned through military experience.

Currently I am not working and am just focusing on being a student.

Can you tell us about the grant project on which you’re a collaborator?
The Libraries and Veterans National Forum was awarded a $150,000 Institute of Museum and Library Services (IMLS) Laura Bush 21st Century Librarian National Forum Grant to host 50 people at a forum in June 2020 at Texas A&M to talk about what libraries can do to help out veterans.

The idea is that there are different diversity groups that have needs, and our group felt veterans deserve some shake and have true needs libraries can help with, and have been helping with. We think we can make this more sustainable and communicate best practices from library to library to help each other out. The grant project will create a toolkit that all libraries in the United States can use when it comes to helping veterans – procedures and policies, different types of programming, different methods of marketing – anything you can do in a library atmosphere to help veterans.

Sarah LeMire is the principal investigator and project lead, and is the Texas A&M University Libraries veteran liaison. An Army veteran herself, she has literally written the book on this topic, as coauthor of “Serving Those Who Served: Librarian’s Guide to Working with Veteran and Military Communities.” Stephanie Graves and Elizabeth German are also librarians at Texas A&M, and these three started the grant proposal and got it off the ground.

There are a lot of collaborators working on the project, but one to note because she is at the UT is Ingrid Ruffin, assistant professor and interim head of the Learning Commons at Hodges Library, and she is also an Air Force veteran.

I got involved because they needed extra collaborators and there was a general call and our regional librarian, Nancy Roark, got a hold of me and told me to check this out because I’m a Navy veteran myself and worked in libraries.

Why UT?
Part of it was proximity, it’s two hours down the road from here. The other part of it is, the boss who told me to apply for the assistant director’s job got her master’s at UTK in the SIS program, and my boss’s boss had also graduated from UTK from the program. They’re both very professional, excellent at their jobs and know their stuff – that sold it for me.

What is Your Pathway?
My end goal is to be a reference librarian at a mid-sized public library. I want to stay in the East Tennessee area. I want to be the cardigan-wearing refence librarian that everyone can trust, at a reasonably sized town, and just do my job.

How has your experience been at UT?:
It’s been awesome. There’s a real diversity of opinions in the classrooms, amongst the students especially. It’s been more than I ever expected and it’s made it a great learning environment. The professors themselves, there’s a diversity and range there, as well.

KC Williams from Blount County is one of my lecturers now, and she was my grant development lecturer, and it was extremely helpful with the vet librarian grant. She was instrumental in that. The amount of information and knowledge I gained from her courses surpassed all expectations for the program.

I really like the diversity of lecturers and professors from different backgrounds, not just academic, that are part of the program.

It’s been a challenge, of course, but at the same time everyone has been super helpful, all the way up to Director Diane Kelly.