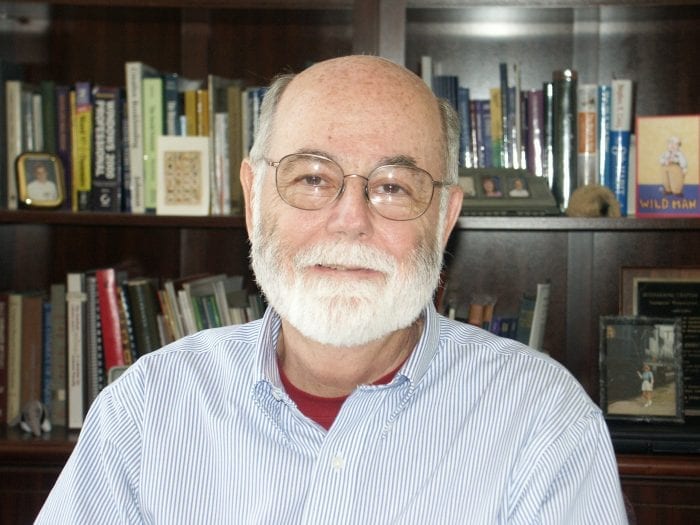 Update: William “Dr. Bill” Robinson died Jan. 9, 2021. He will be remembered by the hundreds of students he taught over his three decades at SIS, and the School will continue to honor his memory with the “Dr. Bill” Robinson Scholarship Endowment. The story below was written in September 2019 in honor of his 80th birthday.

Former SIS Professor Bill Robinson was many things to many students: exacting, funny, personable, tough, whimsical. All these qualities and more are what make up a big personality that has stuck in the memories of more than three decades of students.

This September, when he turns 80, we are taking the opportunity to recall the many wonderful experiences past students and faculty have had with the man they call Dr. Bill.

“He was just absolutely devoted to teaching. That’s where his love was, that’s what he wanted to do. He spent hours and hours preparing for classes, he just loved it,” said SIS Professor Carol Tenopir, who worked with Robinson for several years.

Robinson not only made learning an enjoyable experience for his students, he also made it a worthwhile one, said Susan Jennings (’07), a former student and current dean of library services at Chattanooga State Community College. She took five classes from Robinson – which comprised more than half of the hours she needed for her master’s in information sciences. She jokingly said she might hold the record for taking the most classes from him, but noted she did it intentionally after taking one class and “getting hooked.”

“He was very exacting, but he was the type of instructor that you wanted to please,” she said. “He gave me a good foundation and a lot of good advice during school and after. He was a reference for me for a very long time.”

Jennings said Robinson had a few quirks and jokes that past students likely will recall – such as referring to himself in the third person, or calling himself Dr. Blabbo. Or how he’d say “blump” when he couldn’t think of another word to use in an example.

“It was sort of a fill-in word. ‘Let’s say you work at blump. ’And we all knew what he meant,” she said.

Robinson would often pepper his lessons with relevant stories about his wife, Shelly, and their three children Megan, Daniel and Rob. Or he’d even slip in an occasional photo of his cat into a slideshow or a picture of the garden he so lovingly tended.

Students weren’t the only people who felt the impact of Robinson’s love of the school, profession and teaching – faculty also benefitted from his enthusiasm.

“He was not only an inspiration to students, but also to the faculty. He embraced every change in technology, from teaching face-to-face, to flying to go teach, teaching by broadcast, and then teaching through multiple generations of distance education software. And he kept up with it and helped others do it,” Tenopir said.

SIS Professor Dania Bilal said that Robinson was her personal mentor when she arrived at the school in the mid-90s.

“He was very supportive, critical, constructive, and I learned a lot from him. He’s just a wonderful person,” she said.

Robinson’s reputation as a tough professor made some students wary, such as Martha Earl (’85), who said she dodged his demanding collection development course when he was on sabbatical one summer. But she later took his research methods class and absorbed knowledge from him that has impacted her entire career. Earl is currently the director of the Preston Medical Library at the UT Medical Center in Knoxville.

“That class was so good, and yes it was tough, but it has to be tough. If you’re going to do research in our field, you have to learn how to do it right,” Earl said. “I love research anyway, but I used that course immediately. I’ve published numerous articles and I teach research to physicians and nurses and grad students, and I wouldn’t have been able to do any of that if I hadn’t had such a good research methods class.”

Whether the takeaway was that he is funny, a tough teacher, or a proponent of all things related to books and libraries, one thing is certain: he is a memorable man.

“He was a great mentor even after I got out of school, never missed a birthday on Facebook. He supported all his students, and everybody you will talk to has fond memories of him,” Jennings said.

Perhaps you have $80 to spare, to celebrate Dr. Bill’s 80th birthday and all the great memories you have of him from when he taught you? Or maybe you would just like to be a part of enhancing the field of information sciences by sending more educated professionals into the world. Either way, we have faculty who have pledged to match dollar-for-dollar up to $6,000 between now and Dr. Bill’s birthday, Oct. 25. You can go here to donate, or send SIS a check made out to the UT Foundation with “Dr. Bill Fund” on the memo line. Thank you for your support!

This story was featured in Spark: Annual Publication of the University of Tennessee, Knoxville School of Information Sciences | 2019. If you are an alumni and would like to receive next year’s edition, update your information here.