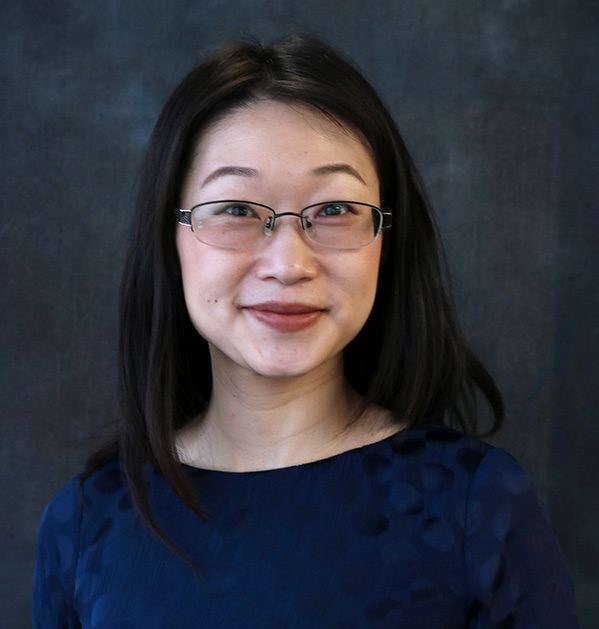 Assistant Professor Xiaohua (Awa) Zhu recently earned tenure and will be promoted to associate professor Aug. 1. She’s been with the School of Information Sciences since 2012. She will also be awarded the 2019 College of Communications and Information Faculty Teaching award in the fall.

We are taking a look back at Zhu’s journey to where she is now as a way to celebrate her achievements. Zhu, a native of China, agreed to share a little bit about where she came from – literally, as well as academically and personally.

Zhu found her love of books and a dream of being a librarian when she was still in elementary school. Her mother worked at a technical college that had a small library, and Zhu spent many summers visiting that library. When she was in middle school, she and her friends had notebooks in which they’d fill out surveys about their likes, hopes and dreams.

“So, all my friends knew, because of these notebooks, that I wanted to be the head librarian of the largest library in the world,” she said.

She set out to achieve her dream and was an excellent student who earned high scores throughout her academic career. Zhu credits her open-minded parents, who didn’t pressure her but instead gently guided and supported her. When it was time to attend college, she left her hometown of Zhengzhou and went far to the south of China, to Guangzho. There, she studied the information sciences.

She soon discovered she had a knack for writing papers, and began publishing papers starting her senior year as an undergraduate. This is what led her from being a librarian, to doing research that supports librarians, she said.

“I never enjoyed writing until I started to write about the things I cared about, in the area of librarianship,” she said.

Despite publishing about a dozen papers during her master’s program, Zhu felt as though she needed better training in conducting research. Her papers were more thought driven than data driven. She began reading about research methods, and a lot of the texts she read were from the United States. She also helped her mentor, Cheng Huanwe, conduct a study about the status of library education in the United States. This led her to applying for doctoral programs in the US, and she applied to about 10 different universities here. She was accepted to several, and chose the University of Wisconsin, Madison, due to ties her mentor had there.

“I had a great time, but I did not have a focus. My interests were too distributed, and as a PhD student, that was not a good thing. We shouldn’t be exploring, we should have a focus to finish the program and write a good dissertation,” she said.

Eventually Zhu found her focus, which was right to information – specifically digital rights. Since then, she’s expanded that focus to include digital ownership rights, access to justice (specifically access to legal information), intellectual property issues, and access to government information. She also maintains her love of librarianship and researches topics related to that, the disconnect there can be between what patrons think of library services and what services libraries actually offer.

Growing Through Her Loss

While Zhu is in what she called the best place ever in her life, it wasn’t a challenge-free path to get there. Her childhood, and her student career were all very smooth-sailing. Then she landed a job as an assistant professor at the place at the top of her list: the University of Tennessee, Knoxville. But that first big life bump came shortly after she came on as faculty at SIS.

“My first semester, I was still figuring things out and orienting myself and becoming a better teacher. When I was just trying to enjoy this new career and life in Knoxville, the biggest blow happened. My mom was diagnosed with fourth-stage lung cancer,” she said. “That was the worst thing that ever happened to me, and it changed my world.”

Zhu’s mother fought the cancer for four years, during which Zhu would travel back to China in the summer to be with her. Those four years, and the one year following her mother’s death, proved to be the lowest points in Zhu’s life. She struggled personally as her husband was also working in another state for a couple of years, and when he did come back, they had their second child. It was a lot all at once.

But after that year of mourning, Zhu said she decided to implement gradual, positive changes. She wanted to eat healthier, exercise more, get better sleep, and also to start working more on her research and earning tenure. Besides her own determination, Zhu also credits SIS Director Diane Kelly, and Professor Carol Tenopir with providing much-needed encouragement and support.

Though she suffered from depression during those years where her mother was sick, one bright point was her students. Zhu loves teaching, and it was something she knew she had to show up for and do well, even if she was having trouble concentrating on research.

“I appreciated the opportunity to interact with the students, and every time I had to work hard to get ready for teaching, and it was a very good distraction for me,” she said.

Coming Into Her Own

Zhu said she celebrated her 40th birthday in 2018, and after all she’d been through, and all she achieved, she felt as though she had grown up.

When Zhu goes back to China and sees school friends, some of them tease her for being “just a professor.” But it rolls off her back. She doesn’t feel as though she is “just a teacher,” and says she doesn’t share the same ideals as many of her old friends do.

“In China, if you’re really good academically, people expect you to do something big. But that’s not me. I feel like the things I do right now are pretty big and meaningful, though not according to their standards. Like trying to make more money or a higher social status – but what I do right now is better for me. More satisfying,” she said. “We’re in this profession where there are a lot of smart, intelligent and insightful people who can do anything they want. But they choose to do this because they want to make a better world and want to be happy by serving people with their wisdom.”