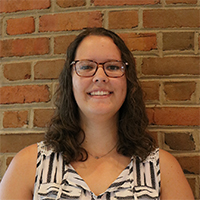 Featured alum: Valerie Aucoin (’19) just graduated from SIS and is currently interviewing for youth librarian positions across the country. She will be attending the American Library Association conference this week in Washington, D.C. as a volunteer, after she helped lead the student ALA chapter at the University of Tennessee, Knoxville.

I had a family friend who spoke highly of the program and we used to vacation in Gatlinburg when I was little, so I kind of knew the area. So I knew I could do Tennessee – it’s cold, gets some snow, not too much. It’s the biggest city I’ve ever lived in, and it has a nice, vibrant downtown.

I basically knew I wanted to be a librarian when I was in elementary school because I was living at the library when I was a kid. We had a librarian who was really, really helpful, Ms. Mims. I found out I could do librarianship as a career, and I wanted to do that. That’s why I settled in Mississippi, and I got my bachelor of science in library and information sciences at the University of Southern Mississippi.

I just like it all, I found such a love in reading as a young child that I remember it being something where you could escape and go wherever you want – even if you’re not physically going to those places in real life. I spent a lot of time reading with my dad when I was a kid; he was a stay-at-home dad, and he’d take me to the library a lot.

It was really positive and I made some good friends in my intro classes. It’s been great meeting people who don’t have the same interests as me because I think I learn things from them; especially from academic librarians and data-driven people, because they have different viewpoints.

I was a graduate teaching assistant for Assistant Professor Awa Zhu and I helped her out with the research she was doing on a paper that she was co-writing. It was about how people perceive digital items and ownership of them, which I found really interesting. I helped refine her ideas and I was a sounding board for her. I did a lot of research on what had already been published on the topic and helped as a test subject for her survey before she sent it out.

I had never thought about the ownership of digital materials before that and how it relates to information science as a whole, so it introduced a new take on the topic to me.

What role did ALA play during your time at SIS?

Lauren Cole (another spring graduate) was co-president with me – she actually roped me in and got me involved. I could help because I had been in a sorority and I knew how to structure larger events and how to create things. When we started, we had 10 members, and we ended with 37.

People became really interested and engaged in it, it was so fun. I like being in an organization where we can meet and chat and be professionals – I also maintained a membership in the national organization.

[Former SIS Professor] Bharat Mehra asked if anyone who was an ALA officer was interested in going to the conference this year as a volunteer, so I took him up on that. I’ll be volunteering with the conference’s Communications and Marketing for four hours a day, and they cover my expenses to be there.

I would definitely encourage students to get involved with ALA. It helped me to meet people, even distance education students, who I probably wouldn’t have met if they hadn’t joined in on our events. It’s a great networking opportunity.