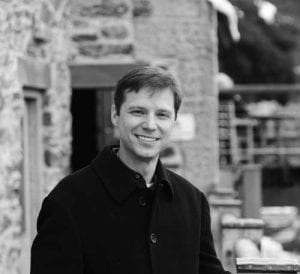 When data are valuable products stored behind closed gates, monitoring those gates are people such as SIS alum Ole Villadsen (’15).

Villadsen works at IBM as part of the cyber security team; his role is to support incident response investigations by providing intelligence support, and he is also building a database of threat information.

He discovered information sciences in a roundabout method, after working as an analyst both in the military and then as a civilian for a total of 20 years. After two decades of government work, he decided it was time for a change, and began researching the organization and retrieval side of intelligence. He already had a bachelor’s degree in foreign affairs from the University of Virginia and a master’s in national security studies from Georgetown University before he started pursuing a master’s in information science.

“I wanted to learn new skills and perhaps live somewhere else and do different things. I did a lot of research on what was out there and what I could learn about that would match my current interest and skills, and I discovered information science,” Villadsen said, and additional research led him to choose the SIS program at the University of Tennessee, Knoxville.

Villadsen was living and working in northern Virginia when he started the MSIS program in the spring of 2014, and he finished the program in fall of 2015. In July 2018, he started his job at IBM in Colorado.

While his current job has parallels to the security work he did for the government, Villadsen said it is in a much different context, and adding the database to his tasks has allowed him to employ his information science skills. The database is a repository of information that can either help mitigate an incident already occurring or sometimes predict incidents before they begin.

“As soon as we see another kind of indicator of compromise, we can check the database to see if we have seen that before and quickly start to build out the investigation,” Villadsen said. “It is fair to say that, with regard to the database, with all the activity we enter in there and the modeling, we are the librarians of that database.”

Villadsen said he envisions the word “librarian” evolving into a skill that is a part of many jobs, as the information explosion continues and more people find themselves in the position of curating it.

“It’s not just about librarians as a title, but as a job responsibility, and that’s becoming more and more common. That people will have a responsibility to organize information as part of a job – that’s one direction things are moving in,” he said.

Database librarianship was just one skill Villadsen learned through the MSIS program – but perhaps not even the most valuable one. As he was taking classes, he said he learned how to seek out and learn new programs, new technologies. Basically, he learned how to learn.

“Everything changes, there’s always a new application, a new type of database, you’re never going to learn it all. So learning how to learn it all is a big part of the program. I got really good project ideas, and I got exposure to a lot of different tools that helped me to learn about other tools,” he said. This has served Villadsen particularly well at his current job, and he said he looks forward to seeing what new program or skill he can learn, and how he can apply that to what he does.

“I’m not the same person before going to school that I am now, in terms of my ability. I’m always learning a new tool, always learning something different, and that wasn’t always the way it was before. My whole outlook on learning and what I like to do changed a lot,” he said. “There’s never been a dull moment in terms of learning stuff, and I’m in an environment now at IBM that is exciting. There’s always something new that we’re trying to build out, invent, or make better, and that’s very consistent with what I learned at UT.”