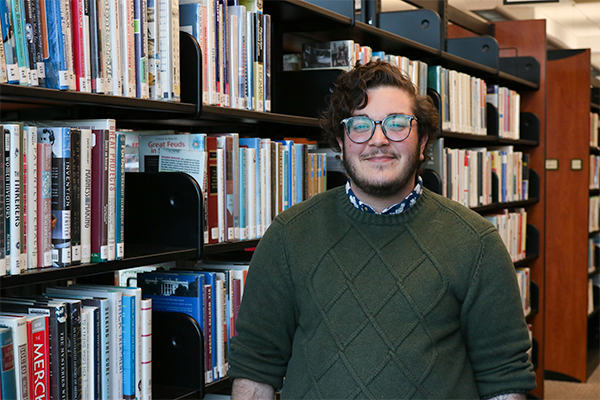 When Ari Baker (’15) first got the career assessment results back that said they’d be an ideal librarian, they were skeptical. After all, they’d spent some time volunteering to shelve books at the Blount County Public Library, and it hadn’t been all that exciting.

Now, three years after graduating with a master’s degree in information sciences and 10 years into working at the Blount County Public Library, they chuckle at their previous notion of what a librarian does. They spend their days as the learning commons coordinator, overseeing a broad array of programs for adults, including English Language Learner classes, Life Skills classes for Blount County Recovery Court Program, and the tech-oriented “Book a Librarian” program.

Baker graduated from Maryville College with a degree in sociology and a certification in non-profit management; they wanted to provide people in the community with the resources they needed. As they were pursuing their undergraduate degree, they also worked at the café inside the Blount County Public Library – a position they held for five years.

“That’s when I learned what a librarian actually does,” they said.

The café position often entailed planning young adult events and programs, which was Baker’s first taste of librarianship. Though they began looking for jobs in the non-profit sector once they earned a bachelor’s, a children’s library assistant position opened up at the library and it was a natural fit.

“I realized that it was the same type of work that I wanted to do, but at a place where I was already comfortable. It also offered a level of autonomy that I liked,” Baker said.

During their time in that position, Baker began looking at whether or not they wanted to pursue a master’s in information sciences. It was daunting to consider another round of higher education paired with the pressures of a full-time job, but they knew they had to do it when they were awarded the Information Technology Rural Librarian grant, which essentially paid for their master’s degree.

I want to keep finding good stuff in the community and supporting it, and finding gaps and filling those gaps. – Ari Baker (’15), learning commons coordinator at Blount County Public Library

While earning their MSIS, their boss retired and Baker became the youth services manager at the library. They eventually moved into their current role as the learning commons coordinator, overseeing adult educational programming, which they have been doing for about a year and a half.

Some may think that moving from children programming to adults would be a stretch, but Baker said it was a smooth transition, albeit a big one. They said they use a lot of the same practices to engage adult participants as they did children.

“All of the practices that create engaged listeners in children can translate to adults – we get up and move around, create opportunities for interaction. Also, children are tough. If they get bored, they’re going to show it,” they said, with a laugh. “Adults, even if they think you’re boring, they’ll still be polite.”

The tangible benefits of his role motivates Baker – times where they get to see their hard work manifest in real and impactful ways.

For example, when one of their life skills students aced a panel interview at a local business after participating in a mock panel interview in class – not only did the practice help, but she knew to come back to the library when the company asked her to take an assessment test as a second step in the interview process.

“She knew we had the resources to study for the test, and we got her those, and she took a practice test. And then she took the real test and got the job,” Baker said, beaming at the memory.

They have also helped a handful of life skills students fill out FAFSA forms and apply to Tennessee Colleges of Applied Technology – and it’s always satisfying to know that they and the library have helped someone overcome an obstacle standing between them and their education, or a job.

Baker is a natural at connecting ideas, funding and resources together to fill gaps in the community. This type of improvisation is often demanded of librarians, and it’s an environment in which they thrive. They write grants as well as proposes, oversees, and often executes programs. Baker estimates they have helped write grants for more than $100,000 in funding over the past two years, most of which is for programming.

Take, for example, the English Language Learner classes offered by the library. Baker said it was a serendipitous moment that brought these classes to fruition – but there was no lack of effort on their part to help make it happen. They were volunteering at a legal clinic at Alcoa High School, geared specifically to immigrant parents and families. It was there they discovered the high school had ELL classes for parents and caregivers of students.

Earlier that week, the library’s director, K.C. Williams, had told Baker she’d like the library to have ELL classes. Once they discovered the high school’s existing program, all it took was some coordination and the right grant – the American Dream Grant – to provide support and resources to that program.

“That demographic [Spanish-speaking] is one that we have a hard time reaching out to. We know that the library can be an intimidating place for them,” they said.

The grant funding provided textbooks, collection development and classroom resources for the ELL classes, but Baker has also added a tour of the library to the curriculum.

“We go to the library a couple of times a year, and everyone gets a library card. It’s a good introduction to the library in a safe place, with support,” they said.

Sometimes, being a fulfilled librarian isn’t always these big picture projects – one of Baker’s favorite little projects is “Book a Librarian.” It was created when people kept asking reference librarians technical questions that they didn’t always have the answers to. So now, patrons who have technical questions can fill out a Google or written form and make an appointment to get their questions answered – usually by Baker. These are often simple questions, such as how to set up an email or perform a function on a smart phone, he said.

So, big or small, Baker is happy to see the difference their work at Blount County Public Library makes. They see themselves staying in their community for the foreseeable future, doing what librarians do best.

“This is my home. I want to keep finding good stuff in the community and supporting it, and finding gaps and filling those gaps,” they said.