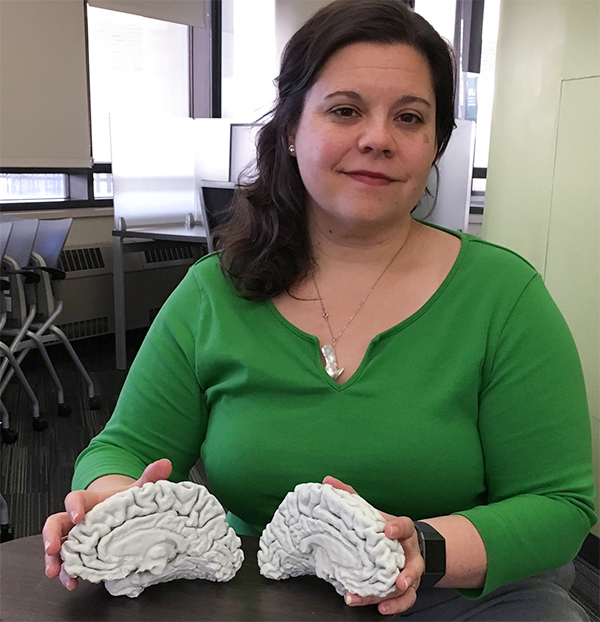 Virtual reality, 3D-printing, models of brains and bones – these are just a few of the things that Dorothy Ogdon (’07) is dealing with on a regular basis. And she’s a librarian.

Of course, she’s not your typical librarian. Currently she is the emerging technologies librarian at the University of Alabama, Birmingham. It’s a new position at the library wherein Ogdon creates and oversees innovative programs and resources.

Ogdon said the inception of her technology ventures at the library started when a student asked if the library had a skeleton to borrow in order to study it.

“They had a skeleton in the lab, but couldn’t take it with them. Those models are expensive. I started wondering if we could make one with a 3D printer,” she said.

From there, Ogdon wrote a Faculty Development Grant application that was approved, bought two 3D printers, and created a space for 3D printing in the library. She is quick to note that this was all made possible through the support of her colleagues and John Meador, dean of libraries at UAB. Now, there’s a catalogue of 3D-printed bones and other body parts that can be checked out of the library, and data shows that these assets are checked out just as much as the anatomy textbooks the library has on reserve.

Ogdon has such a unique and progressive position that it begs the question: just how did she go from earning her initial undergraduate English degree to becoming a librarian on the forefront of new technologies in libraries?

If you looked at a timeline of Ogdon’s career, it is by no means a straight line, and might look superficially as if she had bad luck with timing.

“When I finished degrees, there’d been a huge economic collapse. That has kind of been a feature of my career,” she said.

In spite of this, Ogdon has managed to thrive in her career – likely due less to the economic environment and more to the credit of her creative mind and tireless drive to expand her skills and network. When a recession closed a window, Ogdon found a door with more opportunity behind it.

First, she earned her bachelor’s degree in English from the University of Tennessee, Knoxville. This was a choice based on the strength of her writing, but also one that initially stymied her job hunt.

“What I heard from everyone is that you go out and get your first job, and that’s how you learn. And there were no jobs, the dot-com bubble happened around that time,” she said. So, she worked as a lifeguard and conducted phone surveys before landing a job as a page at the Fountain City Branch of the Knox County Public Library.

“That’s when I found out you could get a degree to be a librarian. I didn’t know that, I had just thought librarians were people who got lucky,” Ogdon said with a laugh. “When I started looking into the degree at the University of Tennessee, Knoxville, I found out that I was really interested in technology, even though I didn’t have an academic background in it.”

She entered into the School of Information Sciences master’s program in spring 2005, not quite knowing exactly which pathway she would take. She had an assistantship with Professor Suzie Allard, and that piqued her interest in conducting academic research. Ogdon also completed an independent study supervised by Electrical Engineering & Computer Science Associate Professor Bruce J. MacLannan, based on his Minds and Machines course, which increased her interest in technology and data.

“The mix of things like that, in addition to more traditional library information, was something that I found really useful and has served me well,” she said.

Ogdon did find a nontraditional job in which to use her varied skill set, doing faceted indexing and other editorial and content production work for Cure4Kids.org, an educational website developed by St. Jude’s Research Hospital. The former Cure4Kids program director, Dr. Yuri Quintana, had once been faculty at a library school and understood the type of skills Ogdon acquired while earning her MSIS.

She worked in that position for several years, even after she moved to Hawaii and began working remotely. As working off-site could be isolating, Ogdon began seeking out professional societies as a way to feel more connected to others in similar professions. The organizations in which she was most involved were the Medical Library Association and the Special Libraries Association.

It was through MLA that Ogdon began accruing continuing education credits, which were valuable to her contract work with Cure4Kids.org, and would also prove to be an asset later on in her career. She eventually moved into a new job as an information services assistant at the Health Sciences Library at the John A. Burns School of Medicine on Oahu.

Ogdon continued to participate in professional organizations, which provided networking and mentoring opportunities for her. To this day, she is an MLA member and encourages other graduates to do the same.

“Join organizations, even if it’s just your local chapter, because you learn a lot,” she said. “If you’re not sure what you really want to do, being able to talk to different people was especially helpful for me.”

She eventually earned a membership in the MLA’s Academy of Health Information Professionals, which required her to have worked for a certain number of years in a health library or health information field, and to submit a portfolio of educational activities and documentation of continuing education credits.

“I have a lot of experience, but it wasn’t necessarily experience people would recognize right away, so I was able to get that credential and it was something people recognize in the field,” Ogdon said.

She continued to leap up in her career and became access services librarian at Toro University in Vallejo, California, which serves about 1,500 students specifically in health sciences and education.

But Ogdon wanted to be closer to her family in Tennessee and she began looking for positions closer to home, and landed her initial position at UAB. There, she was able to stretch her skills more, and was a member of the teaching team for the first-year Evidence-Based Dentistry course in the School of Dentistry.

Now that she’s the Emerging Technologies Librarian, the question she is constantly answering is: What’s next? Ogdon is the principal investigator on a National Network of Libraries of Medicine grant that is funding the purchase of an Allvei Bio Printer, which is a 3D printer than can print in biological materials. She’s also setting up a Virtual Reality Studio in the health sciences library, and once that is off the ground, another VR space will be added to the campus’ other library.

“It’s about exploring the roles for us and what we might be able to provide, service-wise. A lot of faculty is excited, not just about the tools themselves, but about how it’s being applied,” she said.

Ogdon looks forward to seeing what the next technology is that can be applied in a library setting – and you can be sure she’ll jump at the chance once she sees it. She believes there is an opportunity for librarians to be at the forefront of big data and technology, even though librarians have historically been left out of those conversations.

“I want to be able to show up and be in the conversation about how we are going to use these tools in the library, and how they fit,” she said.