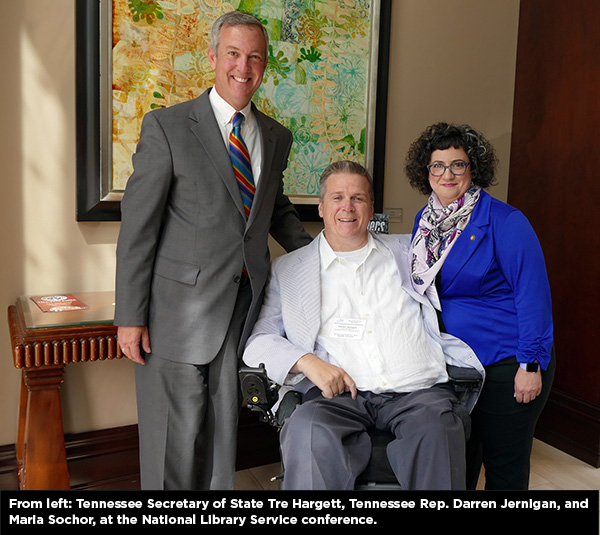 Imagine wanting to read a great classic, but being unable to see the words. Or knowing that your favorite author released a new book, but your hands shake too much due to a medical condition, and you can’t hold a book still enough to consume it. Or consider a quadraplegic, who hopes to read the next book in their favorite series, but is unable to turn the pages.

Well, there’s a library for that: The Tennessee Library for Accessible Books and Media. Its mission statement is, “That all may read.” It’s a beautiful sentiment, and all-encompassing. It’s not just about literacy, but rather ensuring that those who have physical limitations to reading can still access books and media. The woman currently driving the library to find new ways to serve and reach even more of this population is Maria Sochor (‘08), an alumna of the University of Tennessee, Knoxville, School of Information Sciences.

As director of this special library, Sochor oversees distribution of materials to about 5,000 patrons – an amount that she says is just a sliver of the population she would like the library to serve. It’s a unique group that requires out-of-the-box methods for both delivery and consumption of materials.

“The automation system, and the way we circulate books here, is sideways from how a public library does it,” Sochor explained. “The idea of people waiting in line for something doesn’t necessarily exist here – if every patron wanted to read the same book at the same time, I can do that.”

This is because the library has copyright exceptions to distribute books in formats such as braille and audio. They use a reproducible cartridge that is basically a 16-GB USB drive with housing around it that makes it easier to manipulate, to the point where it can be put into a player with just one finger. They even have a breath switch that can be sent out to patrons so those who can’t use limbs to control a player can use their mouths to turn it on and off. Materials are distributed to patrons via the mail – which is one of the biggest changes for Sochor, as she was used to working in the bustling Brentwood Library, which served upwards of 1,000 patrons a day.

‘Being able to possibly provide some sort of comfort to people is a real honor, and that’s something we take seriously here.’ – Maria Sochor, director of The Tennessee Library for Accessible Books and Media

“Last year, we had about 40 patrons walk in here,” she said. “So finding how to connect and be aware of what patrons need without actually being around them was a challenge. Everything being mailed out creates opportunities for operation and workflow design that wouldn’t make sense in a public library. I know at 7 o’clock in the morning every book for every patron that we’re going to send out that day, so I can batch all of that and have people working in sections.”

Patrons of the library need to be eligible to qualify for its services – the process is required to be completed within three business days, but Sochor’s team strives to enter them into the system within 24 hours. This, she said, is because many of the patrons are older or in poor health.

“Being able to possibly provide some sort of comfort to people is a real honor, and that’s something we take seriously here,” Sochor said.

She is always working to find new ways to accommodate patrons and to spread the word about the library’s resources. She maintains a network of people who are likely to be working with potential patrons, but she also does as much outreach as possible, such as conducting presentations at elementary schools.

These presentations include showing children what braille is, and also decreasing any potential stigma against those who have disabilities. There’s also kits available at local public libraries for schools to use for presentations – these include braille books with pictures and words, activities that can be photocopied and used, and more.

“If children are exposed to alternate forms of media at an early age, they may not look at a classmate who’s reading differently later on and think, ‘Oh, that’s weird.’ Or make fun of them,” she said. “We give them the idea at the same time they’re learning to read themselves, that there’s different ways to read.”

Since moving into the director position, Sochor has instituted more resources for the community she serves. This includes a monthly story time for kids conducted over the phone; children are mailed craft kits ahead of time for them to work on during story time, and they’re led to do simple movements related to the story, as well as songs. Children also have the opportunity to introduce themselves and discuss the story.

“We try to give people, especially children who might not be able to leave the house as often as they’d like, the chance to hear other kids’ voices and to talk to each other,” she said.

The library also added an adult program wherein an expert comes in and leads a discussion about their specialty. For example, a favorite speaker in this program recently was on quilts and communications, led by an expert from the state building who talked about how quilts were used to convey messages during the Civil War.

Future projects for the library include moving into a new building, which is set to open sometime in 2020, and recording their own audiobooks. Many of the books in the state library collection – which is in the same building as The Tennessee Library for Accessible Books and Media – have never been turned into audiobooks.

Finding a Place Among the Stacks

Wherever Sochor has worked, she has found ways to improve processes, expand capabilities and provide more services for clients. Problem solving comes naturally to her, and she is delighted when the results of such efforts are tangible.

As it happens with many School of Information Sciences alumni, Sochor didn’t always know that she wanted to be a librarian. After starting college for her undergraduate major, she put the brakes on school and dove into “real-world jobs” where she acquired a varied skillset (which she’d eventually be able to draw from in her future library career) in professions including: food service, selling cars, working in hotels, and finally, managing a Barnes & Noble. It was at the bookstore that the library lightbulb went off, and she realized that she belonged among the stacks.

‘The UT program was perfect for me…I think that being able to work full-time in a library while I was in school was a huge advantage for me.’ – Maria Sochor, SIS alumna, director of The Tennessee Library for Accessible Books and Media

She went back to school and earned her bachelor’s degree in English from Middle Tennessee State University, minoring in technical writing for libraries. She started working at Brentwood Library as a paraprofessional, then a circulation clerk, and moved up until she was in charge of technical services. While she worked, she began attending the SIS program at the University of Tennessee, Knoxville.

“The UT program was perfect for me because I was working full-time,” she said. “I think that being able to work full-time in a library while I was in school was a huge advantage for me.” Once she graduated with her master’s in information sciences – with a focus on public library services, and information and communication technology – she was put in charge of three large projects that let her flex her newly acquired skills.

“I really enjoyed the process of having a clear goal and having to come up with all the stuff in-between, and making sure we were on track and that I’d asked the right people for the right thing,” she said.

Sochor’s aptitude for project management led to her next position as the integrated library systems administrator for the Tennessee State Library and Archives. In that position, she oversaw the automation of libraries across the state, finding ways to make it affordable and easy for even the smallest of libraries to have that technology.

“There were libraries using an automation system that was incredibly outdated and not supported any more. And then there were public libraries that were not automated, but were still manually checking out books with stamps and paper, in 2012!” she said.

By the time they were done, there were only 11 libraries in the state that were not automated. Along the way, she also helped libraries to inexpensively establish easy-to-use URLs for their catalogs, rather than long random URLs.

“My objective there was to make it as easy as possible for a patron to start at the library’s website and tap into these resources that were available to them without them having to navigate around,” Sochor said.

Then she moved into her current position at The Tennessee Library for Accessible Books and Media, and has been thriving there ever since. She is continuously setting new goals for the library – mainly in reaching much more of the population that qualifies for service.

“There is somewhere between 100,000-200,000 people in the state estimated to be eligible. It’s the biggest challenge,” she said. “We’re making sure that we’re reaching the general public and not just trying to hunt and peck around for the individual people who are eligible, because that’s not a very effective way to find people. Part of outreach approach is to just tell everybody, because everybody is going to know somebody at some point who is eligible.”