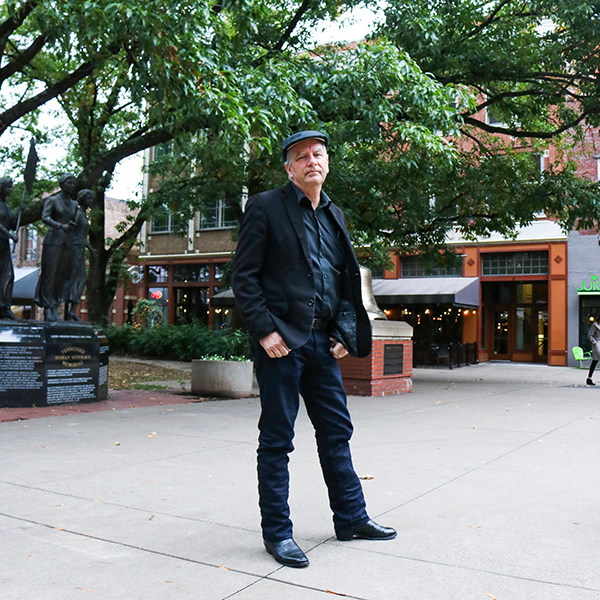 If you’ve ever wondered what to do in downtown Knoxville – enough to do a quick internet search about it – then you’ve likely stumbled across “Inside of Knoxville,” a blog by the mysteriously named “Knoxville Urban Guy.” It’s the place to get the inside scoop on businesses downtown and in nearby areas, and the writer of the blog seems to know things before anyone else in town does.

These days, it’s fairly well-known that the man behind the Knoxville Urban Guy is Alan Sims. What the citizens of Knoxville may not know about Sims is that he had two careers before embodying his current persona – first as a guidance counselor, and the next as a school librarian.

A native of Mobile, Alabama, Sims is an enthusiastic transplant to Knoxville. He came here with his wife, Karen, in 1982, after he had earned his undergraduate degree in counseling from the University of Florida, and the couple were, as he described it, “destitute and could go anywhere.” The Smoky Mountains and the University of Tennessee lured the Sims to Knoxville, and they planted roots and grew their family and careers here.

Sims said he initially planned to get a PhD in psychology from the University of Tennessee, but instead he became certified as a guidance counselor and began working at schools in Oak Ridge.

“I was a guidance counselor for 16 years, and it was a good career. But after you’ve been in counseling for many years, it wears on you,” Sims said. “Some professionals can do it forever, but for a lot of people, it’s too much. I asked myself, ‘Can I do this for the rest of my career?’ The answer was, ‘No.’”

So, at the age of 40, Sims entered into the master’s program at SIS, just as his wife, Karen Sims (’98), was graduating from that very same program. He said it was a good fit, as he’d always loved books, and information in all its forms. It also worked out well for his career – after he graduated in 2001, he was able to transition from school guidance counselor to school librarian at the same school where he worked, Jefferson Middle School in Oak Ridge.

“I just moved my stuff down the hall at the middle school that I worked at, and I’m really grateful for that,” he said.

A Move Downtown & a New Endeavor

But it wasn’t until 2009 that downtown Knoxville really started to play a starring role in Sim’s life. He had visited downtown often enough, even during the time he calls “the bad years” for downtown – mostly to enjoy live music. It was this year that Sims and his wife decided that downtown was where they wanted to live.

“I went online, like a good librarian, and searched for, ‘What is it like to live downtown in Knoxville?’ and nothing came up. No one was writing about it,” Sims said.

That’s not quite when “Inside of Knoxville” was born, but the seed was planted. What really germinated the idea of the blog was when Sims explained the information gap regarding downtown life to a friend of his, an author named Deborah Wiles.

Despite not knowing the medium, he gave it a try. He casually coined the “Urban Knoxville Guy” name in an effort to be semi-anonymous due to still being employed at a school and wanting to avoid any conflict of interests there. Then, he took what he calls “an ugly selfie” of himself with glasses and a hat on, and kicked the blog off.

‘I didn’t expect to find real readers, but I had 30 readers a day then, and for a writer, readers are like drugs.’ – Alan Sims, blogger, SIS alumni

“I didn’t intend to create mystery…but it created a buzz. I didn’t expect to find real readers, but I had 30 readers a day then, and for a writer, readers are like drugs. I’d written forever – poetry, a novel, short stories – and never had too much success. To suddenly have readers was a rush,” he said.

From the beginning, Sims said he employed both the knowledge gained from his years as a counselor, as well as a librarian. He said that going through the information sciences program made him a better writer, and also taught him how to curate and organize his photos and articles from the beginning of the process. At this point, he’s archived more than 100,000 photos that he’s shot over the past few years for the blog; and this collection is something he believes to be very valuable to the history of Knoxville.

“I realized I was taking a comprehensive photographic journal of this special time in Knoxville. I was taking photos no one else was taking. I took that as a real responsibility, and it needs to be preserved, and archived,” he said. “It’s a treasure trove of not only development and business, but people. That’s what I write about – humans who did things, and they need to be celebrated.”

His counseling career, Sims said, helped him to talk to people and make them feel comfortable opening up to him. He’s interacted with so many people throughout the course of writing this blog that he would not have otherwise.

“We all get caught up in our little world. It dictates who we see, who we meet. I would have never met all these people if I wasn’t doing the blog, like the brave 20-somethings who are doing start-ups,” he said. “I’ve gotten to know homeless people and also the wealthiest, most powerful people in Knoxville.”

Sims said his information sciences background also helped him to understand why his website should be practical and accessible to those who want to use it as a resource.

“I have a very rudimentary set up on my website, and I’ve debated on hiring someone to design a fancier website. But people come to the site, and they can find what they need,” he said.

For the first three years of the blog, the website was missing one notable thing: advertising. By chance, Sims met an advertising executive for a local TV station who prodded him to start monetizing “Inside of Knoxville” by selling advertising space on the blog. So, Sims did, and he charged $10 per thousand views; and, at 20,000 views per month, he began making enough money to cover his expenses.

‘I think that, without the [SIS] program, I would not have understood nearly as much as I did, or have the confidence to do it.’ –  Alan Sims, blogger, SIS alumni

By 2014, Sims realized the growing success of his blog combined with his retirement funds meant he could retire from his school librarian position and make the blog a full-time endeavor. Up until then, he was squeezing his writing around his full-time work schedule.

“Launching the blog full-time was the best thing I’ve ever done. It takes a lot of hours, and I don’t make a lot of money…but I’m passionate about it, about this city,” he said. “I couldn’t do it this intensely without loving it.”

Since then, Sims has expanded beyond writing and has done segments for local television, and he started hosting a weekly radio show, Knoxcentric, at WUTK. Sure, it means he works 60-hour weeks and he’s basically working every time he goes out to eat or to a festival, but he’s getting paid to do what he loves.

None of it, he said, would have been possible without the knowledge and skills he gained from earning his information sciences degree; while he acknowledges that the technical skills he learned at that time are now outdated, he said that the “theoretical underpinnings” stuck with him and aided him in this unique endeavor.

“I think that, without the [SIS] program, I would not have understood nearly as much as I did, or have the confidence to do it,” he said.