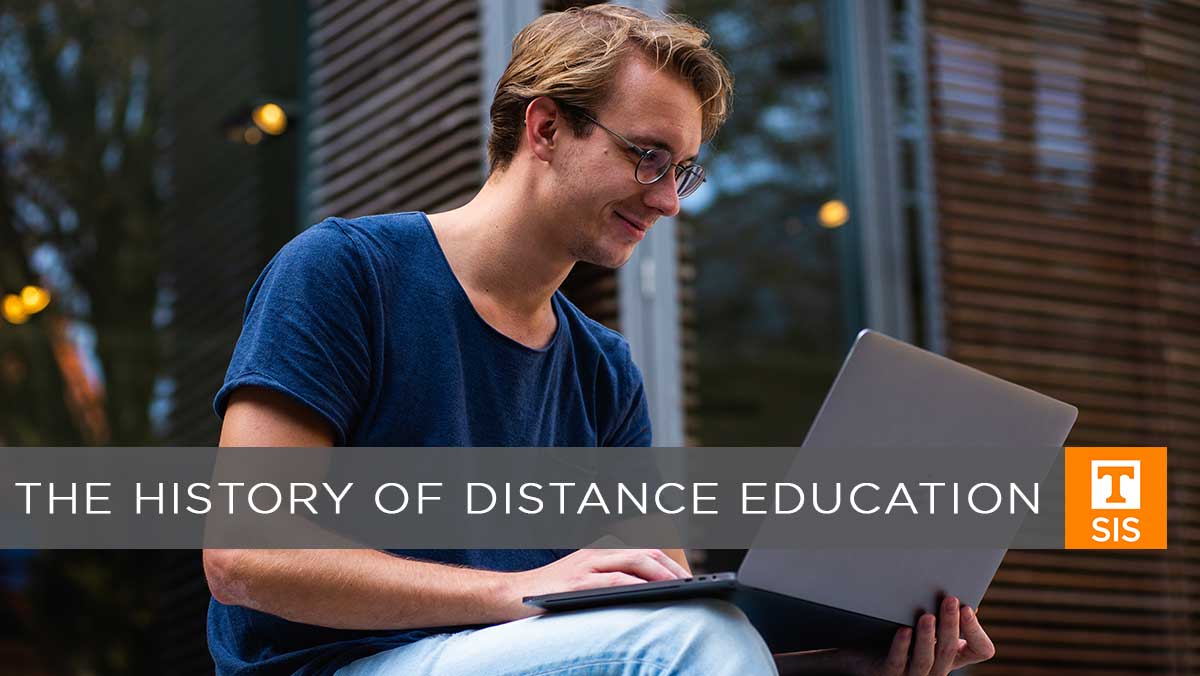 In a world where technology allows constant connection with people thousands of miles away, it’s easy to forget that such effortless communication was once unavailable to us. Despite the technological challenges of the day, the School of Information Sciences found a way to be the first school at the University of Tennessee, Knoxville, to establish a distance education program in the 1980s. It just didn’t look anything like it does today.

Distance education in its first iteration actually meant flying professors to another location and teaching students there – for SIS, this location was Memphis. SIS no longer has any faculty members who taught during that era, but there are two professors who were on the forefront of the next wave of SIS distance education: Carol Tenopir and Peiling Wang.

“In the mid-90s, we did closed-circuit television. There was a studio in what is now Patrick Auditorium, and we would have two technicians behind a one-way mirror, a video camera, and there would be a TV we could look at and see and hear the students on,” Tenopir explained.

Beginning August 1996, classes were broadcast to eight remote locations where students would gather in a classroom and watch faculty teach via a television. There were four locations in Tennessee:, Chattanooga, Nashville, Memphis and Kingsport; and four in Virginia: Charlottesville, Roanoke, Falls Church and Hampton Roads.

When students wanted to ask a question, they’d press a button and be able to speak through the system – it was two-way interactive, Tenopir said. 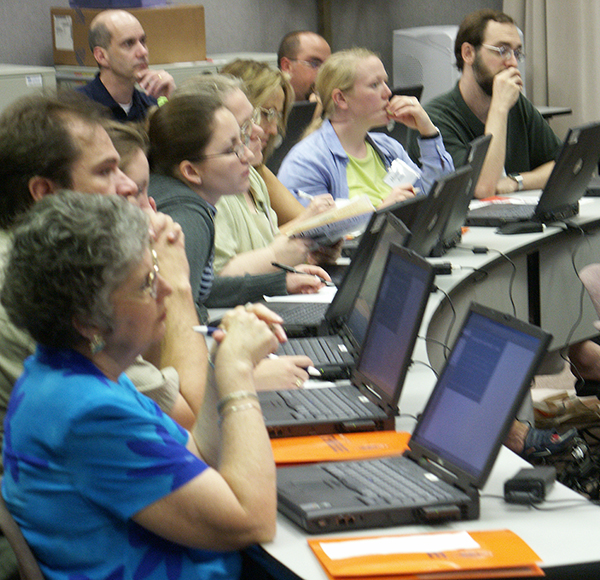 This technology didn’t come cheaply, and Wang said they had to meet a minimum number of distance education students in order to maintain the classes and justify the cost. Each site required a technician on-hand to facilitate the broadcast and to troubleshoot problems. It had it’s advantages, though, as each class was videotaped and the videos were available for anyone who had missed class – something that didn’t happen in regular classroom settings.

Tenopir had some familiarity with this model of teaching, when she taught in Hawaii and her classes were broadcast to other islands within the state. Wang said there was definitely a learning curve to this type of teaching, and she had to learn how to stay within the video frame and how to ensure that students could see what was on overhead projector slides. She eventually started sending copies of the slides ahead of time to sites so students could have them in-hand during her lessons.

The program was deemed a success as interest from residents in Tennessee and Virginia continued to increase, according to a document in the SIS archives.

It wasn’t long before the next form of distance education developed, as home computers and the World Wide Web became ubiquitous.

“The internet got faster and stable enough to use that we could do distance education through the internet, but we still had issues,” Tenopir said. “A lot of our students didn’t have good internet, some still had dial-up.”

Gone were the days of teaching on video, as it took up too much bandwidth. The classes were audio-only, and PowerPoint presentations were visible during the lessons. Students were able to communicate with teachers via chat features.

‘We thought that was important, that face-to-face is a better experience. It’s more personal.’ – Professor Carol Tenopir

With the current distance education model, students can once again see their teacher on video in real-time, and can even log in themselves to be visible on video to the teachers and the rest of their class. The chat feature allows students to pose questions and engage in discussions with faculty and other students.

One feature that has never changed throughout all the years of SIS distance education is that the classes are synchronous – which means that everyone is attending the class in at the same time, just as if they were present in-person.

“We thought that was important, that face-to-face is a better experience. It’s more personal,” Tenopir said. Students have echoed her sentiments, stating that synchronous classes allow them to feel included in a community, and that they aren’t just taking a class by themselves.

Wang said that there is a lot of work that goes into planning distance education classes, as opposed to in-person classes. Everything needs to be on-point and prepared ahead of time for classes to run smoothly – there’s less opportunity for extemporaneous conversations. Another high point – just as the videos were available before during the early broadcast days of SIS distance education, video recordings from every class are instantly available once the class ends.

“Another advantage is, many of our students are professionals and in a working environment, so they might travel for work, and they can still attend class while they travel,” Wang said, and Tenopir pointed out that the same benefit works to the advantage of traveling faculty.

‘Technology doesn’t determine how we teach, it just facilitates it.’ – Professor Peiling Wang

Both professors expressed that they are sometimes concerned students don’t pay as much attention during distance education classes, but they try to structure the class to avoid this, such as breaking out into groups for discussion and encouraging interaction.

“Technology doesn’t determine how we teach, it just facilitates it,” Wang said.

So what’s next for distance education? Neither professor was sure what exactly will happen, but both had no doubt that technology will find a way to make it even better and more accessible for students.

“My dream for the next version of distance education is 3D,” Wang said. “When you’re in class in person, and you say something, students react to you, and I really miss seeing that. If I can see that they’re puzzled, I change up my example. And then they get it, and have an ‘aha’ moment. I do miss seeing that.”