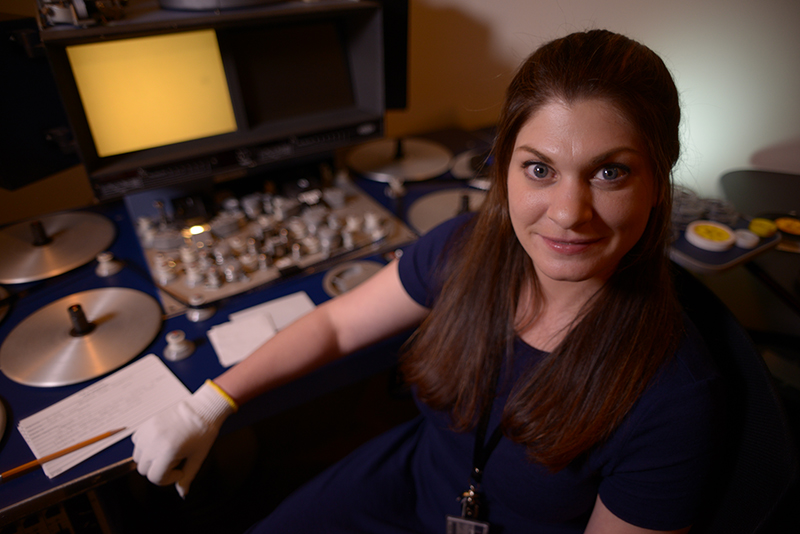 What do medieval stained-glass pieces have in common with old film from the Y12 National Security Complex? Both should be archived properly, according to Natalie Hansen (‘12), an SIS alumni. Hansen started her academic career studying art history, and moved into medieval art as she attained her master’s degree in medieval studies at the University of York in the United Kingdom. After that, she went to the University of Illinois to pursue a doctorate in art history.

As she studied and researched her subject, Natalie kept running into an issue she believed could be resolved if she got a degree specializing in archives.

“I was working on a digital humanities project where we were scanning medieval manuscripts and trying to write computer algorithms that would identify artists by certain factors – like the way they mixed colors. “

This was requiring me to travel to Europe a lot, and I noticed a lot of these pieces could be digitized and not be handled so much. I could access them in the United States and not have to travel so much,” Hansen said.

This led her down the path to becoming an art archivist, to help digitize items and make them accessible to a broader audience. She started looking at academic programs she could enter to learn archiving skills, and found that the University of Tennessee, Knoxville, School of Information Sciences master’s program was a good fit. Rather than taking distance education courses, Hansen moved to Knoxville.

“I loved Tennessee as soon as I first got here,” she said.

Fate would have it that she would get to stay in East Tennessee.

Because of her interest in archives and digital work, she started taking classes geared towards that interest. She was one year into the program and had just completed the Digital Libraries class when SIS Professor Suzie Allard approached her about a potential graduate assistant position.

“She came to me one day and said, ‘How do you feel about nuclear power?’ And I said, ‘I don’t mind it really, I guess.’ Then she told me about this job that they had at Y12, and that they needed somebody to create a digital library for their photography,” Hansen said.

Y12 National Security Complex in Oak Ridge, Tennessee, is “a premier manufacturing facility dedicated to making our nation and the world a safer place and plays a vital role in the Department of Energy’s Nuclear Security Enterprise,” according to its website. It was founded in 1943 and there is a wealth of history stored in its archives.

This graduate assistantship wasn’t just serendipitous timing – it was also a good fit. Hansen began designing a library, and started running into a lot of organization issues that needed to be addressed – she was trying to figure out challenges such as proper preservation of film, metadata issues, and a lack of structure for record keeping.

“Because of that, they decided to keep me on full time, and not just for the keeping of the digital library, but the analog as well,” she said.

Hansen is now going on her sixth year at Y12, and is still making her way through the treasure trove of archives that need organizing. She’s written a custom system to make metadata for the records, and has also written a program to allow in-house cataloguing. She’s also been put in charge of the digital asset library, which was customized in-house. The archives team at Y12 may soon grow, as the project list has become longer and longer – one project of properly preserving and archiving 3,000 rolls of film is likely to be about 15 years’ worth of work, Hansen said.

While this wasn’t the job she envisioned doing when she first came to UT for her Information Sciences master’s degree, but Hansen said it’s been greatly fulfilling.

“I miss teaching a little bit, I miss sitting in a room talking about art, but honestly, I kind of do that now. Instead of medieval stained glass, I talk about photos of turbines, fans and beakers, and all sorts of scary machines. There’s still photographs, videos and graphic design. The visual aspect is still there, and apparently that is what is important to me, because I love what I do,” she said.

Hansen is pleased she pursued this degree, and that she was able to stay in Tennessee – her full-time position was created just for her, during a hiring freeze, and she counts herself very lucky for getting to stay on at Y12. She encourages anyone who is thinking about an Information Sciences degree to go ahead and pursue it due to its marketability and versatility.

“There’s more opportunities than you think there are in Information Sciences, it’s an evolving field. You can find a niche for yourself in ways you didn’t think was possible before,” Hansen said. “If you were an art history major, it really doesn’t follow that you’ll sit and look at stained glass all day. It’s not like you’re going to be sitting in a library all day if that’s not what you want – you can shape this degree and experience into what you want.”

Hansen also praised the School of Information Sciences, noting that it was hard to make a big life change from art historian to information scientist, but being at UT gave her a true sense of community.

“Going to UT was probably the best thing I could have done for myself…It was comforting, the program was really supportive, I felt like I was learning everything I needed to learn in terms of background and theory, and when I needed help, someone was there,” she said.