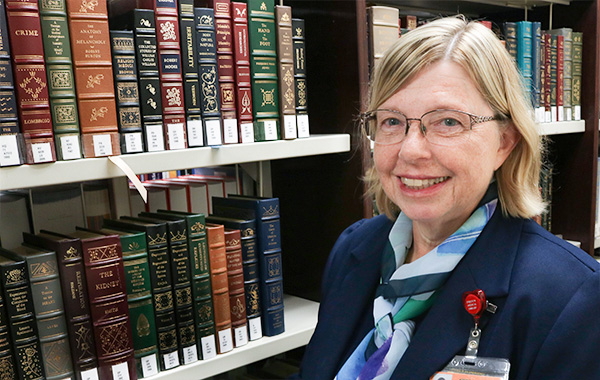 Martha Earl distinctly remembers the first time she ever heard a librarian describe her job as “fun.” She was working a full-time library staff support job while simultaneously getting her master’s degree in library science – both at the University of Tennessee Knoxville. A supervisor knew Earl’s interest in being a science librarian, but suggested she talk to the director of the Preston Medical Library at the University of Tennessee Medical Center and ask what it’s like to be a medical librarian.

“I called the director, and she said, ‘I love my job! Doctors ask us for information, and we bring it to them and we help them save patients. It’s so fun!’” Earl recounts. “I’d heard librarians describe their job as a service, as fulfilling, but never before as ‘fun’.”

It’s been almost three decades since she had that conversation, and now Earl herself is director of the Preston Medical Library at the University of Tennessee Medical Center. It only took her 21 years of working at the library to achieve her “dream job” of being director, but she says it’s been very much worth it.

Despite that conversation with the medical librarian early in Earl’s career, her path did not take her straight to medical libraries. She first graduated from UTK with a bachelor’s degree in Science and Math Education, intending to be a teacher. She credits her father with emphasizing the importance of education and having a career path set early on. In fact, he required all his children to know by age 14 what degree they would later earn.

“In those days, if you were a woman, your career options were limited, but my father wanted to prepare us for careers,” she said.

Earl did teach for two years, before she decided it was definitely not the right profession for her. That’s when she took a job at University of Memphis working in microforms.

But as an East Tennessean, Earl missed her home, as did her husband. They decided to move back to Knoxville and that’s when she began working at the UTK library as support staff, and earn her master’s degree in library science. Once she graduated that program, she was stuck for a little while in her support staff position – her dream was to be a librarian on campus, but that wasn’t meant to be. She began expanding her job hunt to within a five-hour radius of Knoxville; that’s when her fate to be a medical librarian took form.

“I went to an interview at Meharry Medical College, and I walked in and loved it immediately. It just clicked,” Earl said.

She landed the job at the Nashville college as a clinical librarian, and dove right into what was an excitedly fast-paced position. She would join physicians for 7 a.m. rounds starting in the ICU, and keep pace with them as they worked their way through the entire hospital. She would respond expeditiously with results from literature searches requested by the physicians, and she also served as a liaison to students who were writing grant proposals. She enjoyed the environment so much so that she at one point considered attending medical school.

But the next change to come was another move. At the time, Earl’s husband was working at his family’s business in Virginia, and the strain of a long-distance marriage became too much for the couple. She took a computer and audio services librarian role at East Tennessee State University College of Medicine Library in Johnson City, Tennessee. Within six months, she was promoted to the head reference librarian position there, which she held for seven years.

“ETSU had four teaching hospitals, each of which had their own library. So there were no clinical librarians at the ETSU medical library,” Earl explained. “But what we did do there was a lot of outreach, because it was a rural area.”

That outreach experience became advantageous when she was offered a job at the Preston Medical Library as a consumer health reference librarian. This achievement was by no means a lucky stroke – Earl purposefully joined groups where she would “run into” the director of the Preston Medical Library, and eventually she impressed the director enough that she was hired when a position opened. 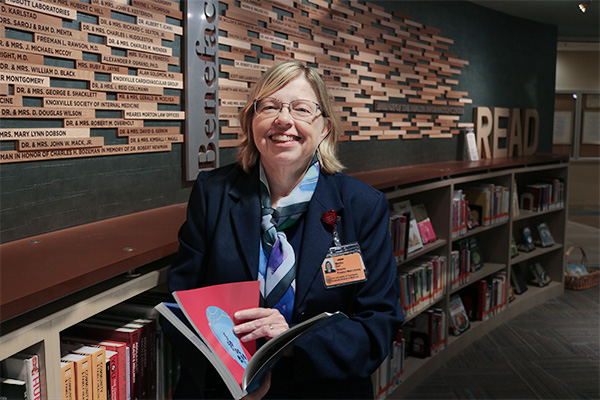 At Preston, Earl worked with the Health Information Consumers – members of the public seeking health information from the medical library. Many times, these consumers are caregivers for someone who is sick, she said.

“Working with the consumers was so different 20 years ago, because there wasn’t the Internet like we have it now. We would send out about 100 packets of consumer-requested information every month. It was very, very busy, but it was delightful,” she said.

Earl eventually moved into the assistant director position at Preston, and she rode the waves of evolving technology that drastically changed how the library’s consumers (both the public and medical consumers) access its services and collection. Preston houses about 2,500 physical books, but the rest of the collection has moved to a digital format. The physical books are primarily kept in the event that digital collections are inaccessible, such as in New York when 9/11 occurred and there was no internet available.

Though a lot of her work goes into maintaining the medical collection and providing services for the medical community at UTMC, Earl takes special pride in the consumer portion of the library. When she first started at the library, it was housed in the UT Graduate School of Medicine. In 2014, the library was moved into what Earl calls the “heart” of the hospital.

“I was surprised that they moved everybody, but the first day that I was here, I knew that they did the right thing,” she said.

Preston Medical Library now sits near a busy crossway in the main hospital, easily visible as its entrance is made entirely of glass allowing passersby to see an open room distinctly different from the rest of the hospital. Soft lighting hits architecture with flowing lines, and a color palette of greens, blues and earth tones are instantly calming. White noise is pumped softly throughout.

The inviting aesthetic is intentional, as the front portion of the library is intended for public use. There are multiple cozy seating areas for patients and visitors to settle down in with a good book, a little space with tables where they can drink coffee, and computer kiosks where they can access the internet. Visitors can choose from health-oriented books that highlight both the hospital’s centers of excellence and the top diseases in East Tennessee. Brand new to the collection is a set of leisure books – all top sellers, such as the “Harry Potter” and “Hunger Games” series, as Earl wants the small collection to be as popular as possible with visitors.

“This is supposed to be an oasis for patients or family. If you’ve ever been in the waiting room or ICU, you know that the tension there is so high. This is an oasis they can come to,” Earl said.

Earl still works to ensure that the library’s health information consumers get what they need, but today’s technology has changed how that is done. The library is now able to tailor the literacy level of information for individual users so that it is easier for them to consume, she said. With the advent of the internet, the library doesn’t have quite as many requests from consumers, but it will always remain a resource for them. 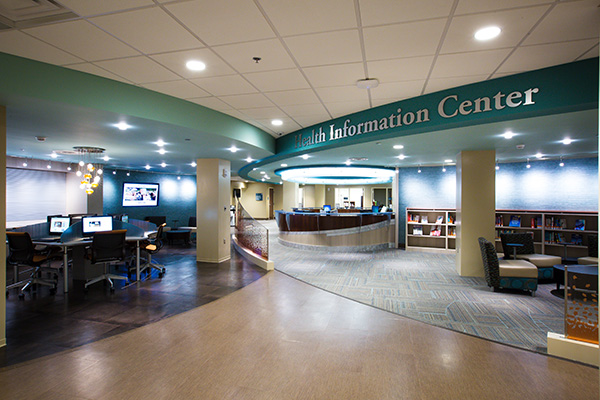 Past the public-facing portion of the library is where the medical collection lies, but there’s also a handful of study rooms, computer stations and training rooms. This is a quiet space for students, residents and other hospital employees to rest and learn.

As of September, Earl was seven months into her position as director of the library. Besides a lifetime of work and experience, she also put in an entire year of training as a National Library of Medicine/Association of Academic Health Sciences Libraries Leadership Fellow that prepared her for the director job. It was in this course that she was able to learn the latest in data management, and more about serving diverse populations.

Earl is especially excited about the future of information sciences – she reminisces about her early days as a disgruntled graduate unable to easily find a librarian job, and sees how different the landscape is today with the growing opportunities for those who graduate from the UTK School of Information Sciences.

Her love for the University of Tennessee is forever unwavering, and she continues to support the school and the program. Earl has taught two courses through the School of Information Sciences in recent years, including one this past summer, SIS 597 – Health Science Information Centers. She loves teaching SIS students, and has three who currently work with her at Preston, as well as two graduates of the program.

Earl’s job, and the services she provides to others, is exactly what she once hoped she would do with her life; but perhaps she wasn’t expecting to derive such joy from it all. When she was a little girl and considering her father’s mandate to settle on a career, she had three professions in mind: teacher, librarian and scientist.

“That’s the beauty of being a medical librarian,” Earl said, with a bright smile. “I get to be all three.” 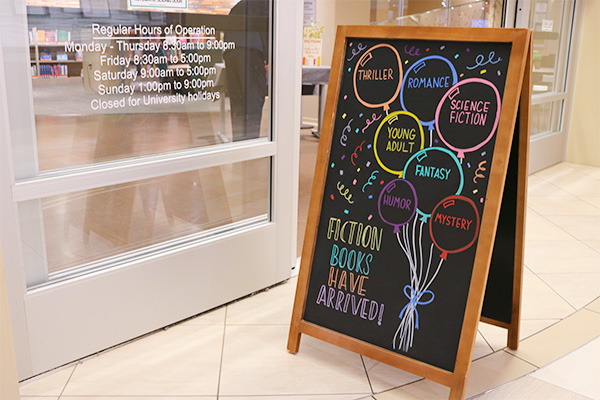