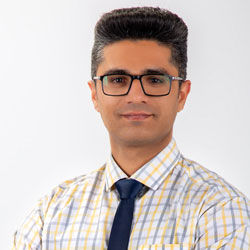 Ever since he was a child, Iman Tahamtan knew he wanted to do research. He’d see people on television with the title “researcher,” and he found the whole idea appealing. So he asked his uncle, who he said is a renown agricultural professor, what the best way was to fulfill this dream.

“He told me that there’s a field called library and information science, and that these people are good at finding literature and information, and researching it,” he said.

He earned both his undergraduate and master’s degrees in medical library and information sciences, in his home country of Iran. But, as he said is common with Iranian students, he wanted to go abroad to get his PhD; in fact, part of the appeal for him in picking the University of Tennessee, Knoxville, is that there are about 55 other doctoral students on campus who are also from Iran, and they have an association.

The other reason he decided to earn his doctoral degree at UT is because he wanted to work with Professor Peiling Wang, who was doing research with scientometrics and text mining on open peer-reviewed articles.

“She is a very nice person and she helped me a lot when I first came here, because I didn’t know anyone and I was adjusting to living here,” he said.

It also didn’t hurt that the weather in Knoxville is comparable to that of northern Iran, which is a desirable area to live in; he said it is “perfect for him.” Once he graduates, he wants to stay in the United States and plans to become a United States citizen in a year and a half.

Tahamtan’s research has shifted some since he first started the doctoral program, and he is combining his medical information science background with some of the skills he’s learned over the past three years, such as text mining. His current project is to analyze tweets to better understand the opioid crisis currently happening in the United States. One of his objectives is to help people who are victims of opioid addiction, as well as the healthcare professionals who treat them.

This research follows on the heels of other topics he’s studied with similar methods, including cyberbullying, sexual harassment and the #metoo movement. His most current paper is about how the societal impact of research can be measured.

Tahamtan said he’s enjoyed the opportunities to collaborate within the College of Communications and Information, as well as with faculty in other disciplines.

“This is something I like about information science, you can work with other schools. For example, I learned text mining from Dr. Alex Bentley from anthropology, and we are working on an opioid research grant with someone in agriculture,” he said. “Overall, being in this college has been a really great experience, and I’ve especially enjoyed working with different faculty members.”

“Without them, I may not have been able to survive the tough times I had last year. I have always received a lot of support and encouragement from both of them,” he said.