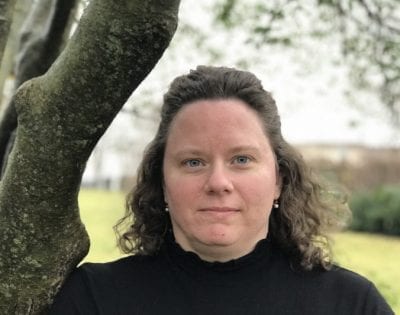 Juniper Starr, a master’s student in information sciences, is helping to preserve the history of African-Americans in Appalachia.

Her work will be part of the East Tennessee PBS digital series Black in Appalachia. The project’s goal is to highlight the history of African-Americans in the development of the mountain South and its culture by collecting materials and narratives, engaging with the public and holding exhibitions.

After researching her own family history, Starr realized how much information is lost because people often don’t believe their stories are worth telling. So when the opportunity arose to work on this project, she was thrilled.

“My role in the Black in Appalachia project began as my School of Information Sciences practicum focused on collecting and digitizing historical material in the Greene County African-American community,” Starr said.

As a digital archivist, Starr scans in contributed materials and then categorizes the artifacts, images, and stories shared by people from the region.

While researchers have gathered materials from Tusculum College, the Greene County History Museum, and the Elmer T. Cox Memorial Library, many of the best items have come from community members themselves.

For instance, during a recent meeting of the Negro Women’s Civic Club in Greenville, Tennessee, area residents were filmed as they shared stories about themselves and their ancestors. They also brought in family photographs, newspaper clippings, home movies, and other historical documents.

Starr scanned these personal items into a computer, then saved the images on jump drives—keeping a copy for the Black in Appalachia project and giving another copy to the participants after returning their artifacts.

Starr will graduate in May and hopes to begin her career in an academic library working in archives and special collections.

She said her UT professors and mentors have been her biggest cheerleaders.

“They inspire me to reach for those far off dreams and give me the tools to make those dreams possible in both my personal life and career. I have found lifelong friends, not just colleagues.”